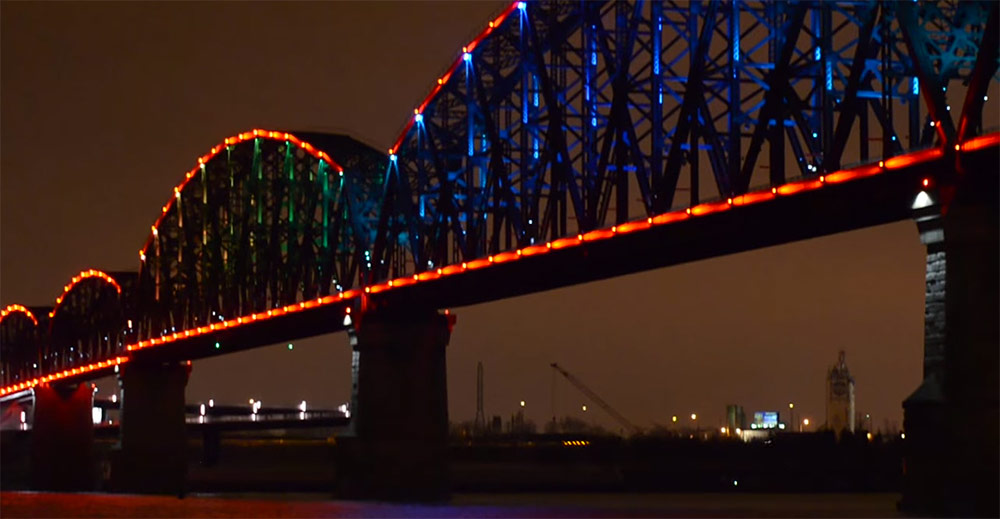 When describing Louisville to my Yankee comrades, the feature that dominates my depiction of the place is the Ohio River. The river is magnificent and menacing; it’s the reason our dear city exists; its call so powerful that people are compelled to patronize Joe’s Crab Shack just to be near it. And it’s the feature that downtown developers are counting on to revitalize the urban core.

The city and state governments recognize this and have invested generously in the development of our prized waterfront. While most of the recent riverfront projects have been smart investments in Louisville’s urban future, the recent Big Four Bridge lighting is an example of foolish fiscal management and Louisville’s addiction to bright and shiny things.

Last month, Mayor Greg Fischer and Waterfront Development Corporation (WDC) President David Karem inaugurated a $2.1 million, three-year investment in Louisville’s waterfront—flashing lights on the Big Four Bridge. The money—privately raised, with a small contribution from the city—is a lot for an organization with a $2.1 million annual budget that depends on benefactors for capital projects. The fiscal strain is especially acute given the General Assembly’s decision to stop funding the organization last year, cutting its annual budget by about 18 percent.

All of which makes the WDC’s recent decision to raise an additional $700,000 for more lights utterly confounding. Meanwhile, WDC is seeking up to $2.5 million in funding to develop parkland beneath the Big Four Bridge, is touting a $35 million Waterfront Park Phase 4 Conceptual Plan, and supposedly cannot even afford to maintain the Big Four Bridge during foul weather. The Waterfront Development Corporation should focus on what it does best, projects like the latter two—building inviting greenspace along the Ohio.

As the steward of one of our most treasured assets, the WDC also has an obligation to do what’s best for the city. And I’m confident that the key to unlocking Louisville’s potential for both its current and prospective residents lies in infrastructure improvements that make parkland more accessible and plentiful. To some, the flashing lights on the Big Four Bridge are terrific, and I don’t begrudge their sentiment. I’m even glad that the WDC has thought to monetize the project because raising money is difficult. But I can’t help but think that last month’s elaborate lighting ceremony smacked of a cheap (but expensive) victory.

Louisville planning is often riddled with insecure undertones that diminish our great town and our people. If we build parkland along the river and link it to our architecturally and culturally rich town, then we won’t need to waste money on flashing lights begging other cities to look at us.

[Video by Jacob Zimmer; images taken as stills from the video.]