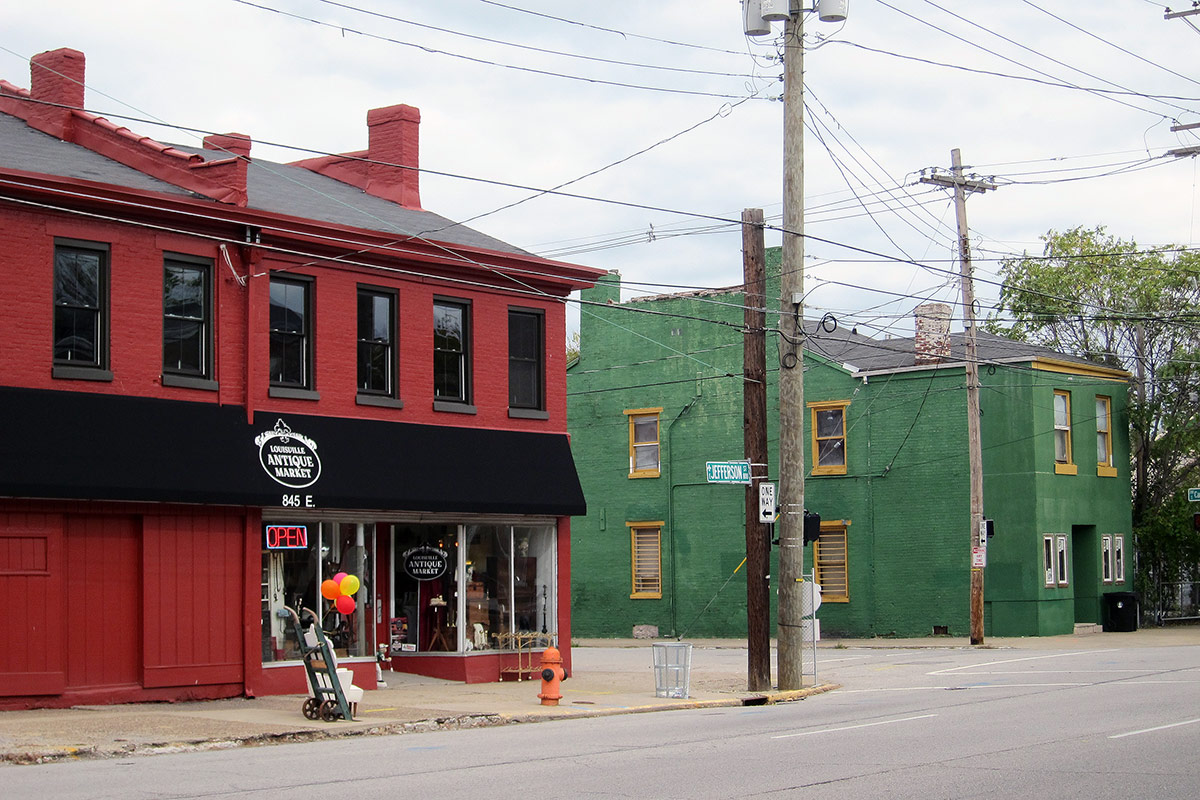 A few weeks ago, two motorists collided at the intersection of Jefferson Street and Campbell Street on the border between Nulu and Phoenix Hill. Their cars impacted with such force that the vehicles were sent careening into a historic building, knocking a massive hole in its side.

The building on the northeast corner is painted bright green and belongs to the Premium Horticultural Supply (which merged with Waldo & Associates in January). The structure was built circa the 1850s, according to a tipster, and has had several additions over the years. Third floor windows between the chimneys have also been bricked up.

The structure was most likely a dwelling when it was built, with a modest setback from the street. One or two bumpouts over the years pushed the facade right up against the sidewalk and a concrete block structure was added on the back.

The hole in the building was quickly covered with plywood and it appeared that the building, while damaged, was safe.

On Monday, however, a tipster sent in the above photo showing part of the wall had failed, spilling bricks onto the sidewalk. “The sidewall has been slowly giving way over last week,” our tipster wrote. “Looks like it could be saved but you know how these things go…”

Those intuitions were right. By Wednesday, the tipster wrote back reporting that an emergency demolition order had been posted on the structure. “There is interest from Nulu members and buying it and we’re trying to track down the owner,” the tipster said. “It definitely appears it can be salvaged if the wreckers don’t get there first.”

The location of the damage appears to have contributed to the deterioration. The impact hit at the seam between the original building and an addition, which likely caused more damage than an impact a few feet away.

Those interested in saving the structure had better act fast, though. We called Premium Horticultural Supply and they said the city inspected the building and made the determination it needed to be torn down. Demolition crews are expected on the site today or tomorrow.

If the building isn’t saved, the intersection will endure a large missing tooth—there’s a vacant lot on the other side of the structure. This intersection is a rare example in Louisville with four intact historic structures, one on each corner.

Another lesson that should be taken from this case is that Louisville’s streets are simply too dangerous—by design. Jefferson Street is an enormous one-way superhighway sending motorists’ cars barreling toward Downtown, with little regard for anything except shaving a few seconds off their commute.

While we couldn’t find any report of this crash in the local news, one can’t help but wonder what kinds of speeds would be required to cause such a dramatic collision. Thankfully no pedestrians were walking by at the time or they surely would have been crushed.