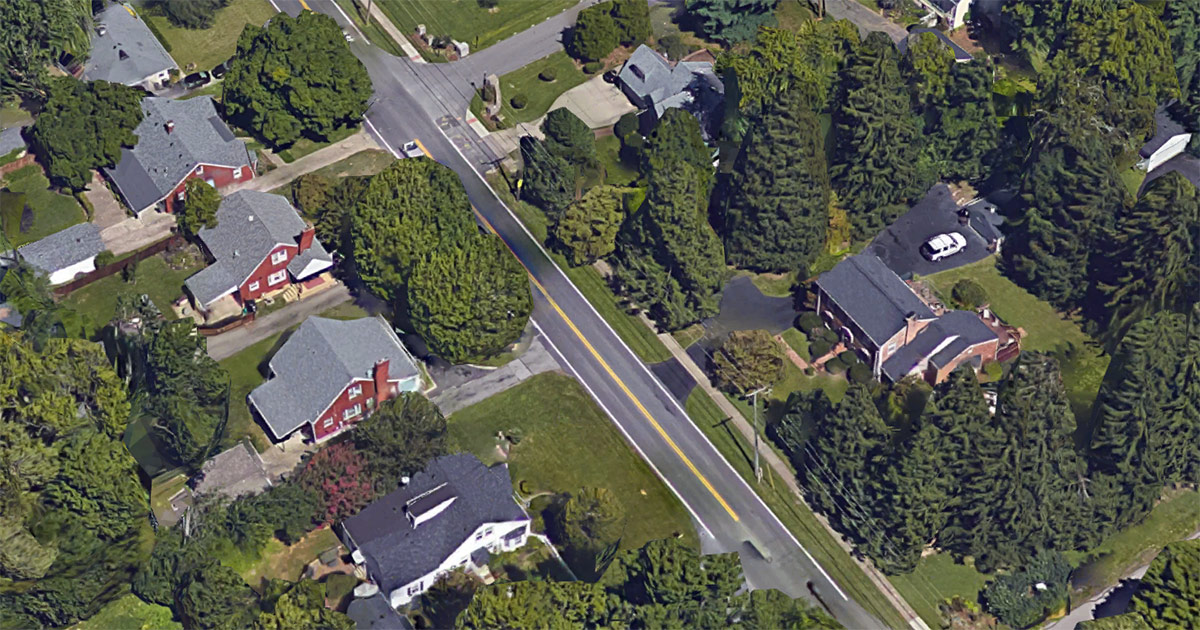 Tonight the Kentucky Transportation Cabinet (KYTC) is holding a public meeting (details below) to gather input on the future of Chenoweth Lane in St. Matthews. There’s no plan on the table right now—this is just an information gathering meeting—but the KYTC said in a press release that changes could mean widening the street or adding bike lanes.

Let’s take a look at what we know about Chenoweth Lane.

Chenoweth Lane stretches a little over a mile from Shelbyville Road to Brownsboro Road in St. Matthews. It’s a two-lane street running through a predominantly residential area with houses running along its length.

At either end are commercial districts, which are slowly creeping down the road—many houses near the Shelbyville Road side have been converted to commercial use. There’s also an at-grade railroad crossing before Chenoweth turns into Breckenridge Lane at Shelbyville. Commercial areas of the street maintained the landscaped front yards of the houses with parking typically in the back. There’s no street parking along the street.

The area was built up as the automobile was exerting its dominance on land use planning, but the area is still generally arranged with blocks and is somewhat walkable, especially at Chenoweth’s southern terminus in downtown St. Matthews.

There are sidewalks along the stretch, with a complete link on one side of the road. The other side is missing sidewalks for most of its length. Sidewalks are very narrow where they exist. There are no TARC stops on Chenoweth, but there’s one at each end on the transit-heavy Brownsboro and Shelbyville roads.

There’s only one crosswalk between Brownsboro and Shelbyville roads, located at Druid Hills Road. The entire mile-long stretch is a 35 mph free-for-all with no regulated intersections, such as with a stop sign or light.

Overall, the streetscape has struggled to keep up with modern trends of a growing St. Matthews. That neighborhood’s downtown has been thriving in recent years, largely in part due to an interest in walkability and authentic character. A modern streetscape that addresses the urban and walkable nature that’s bringing a brisk business would go a long way toward keeping up that momentum.

At the meeting, KYTC representatives will distribute handouts with information on the planning study along with comment cards that can be filled out and given to KYTC.

Any time we hear a department of transportation start talking about “improving” a street, a little red flag is raised. Such talk is usually code for making an already car-centric street friendlier for motorists. It tends to mean improving the efficiency of a street to move a lot of cars fast—and little else.

That point was comically illustrated by Strong Towns in the video below:

As we mentioned, there’s no plan right now for any changes to the street, but there could be soon, so your input asking for a true multi-modal, complete street is crucially important. And it’s heartening that KYTC has said bike and pedestrian infrastructure is on the table.

But there’s still a lot of confusing talk about “improvements” in the language being used. It might be clearer if more objective language were used, such as “changes.”

For instance, the press release announcement said a planning study would “identify potential improvements” such as “roadway widening” or “intersection improvements” (another word for roadway widening by adding a turning lane), and “upgraded pedestrian/cyclist accommodations.”