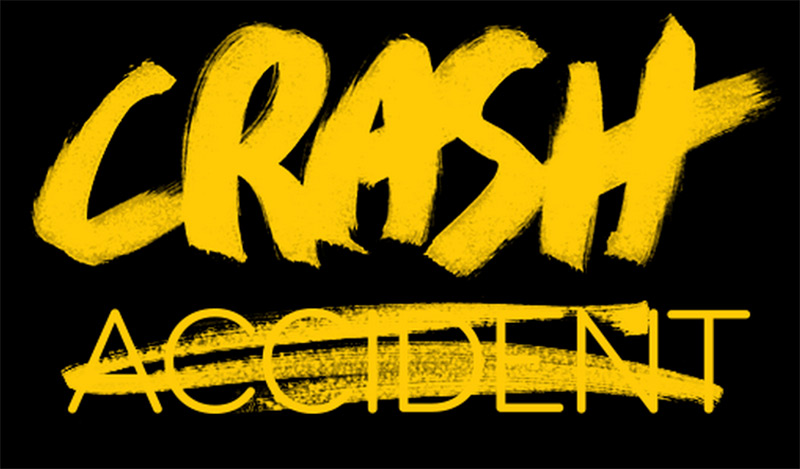 Last week, we briefly discussed how Louisville’s local media covered the story about an LMPD officer who crashed his cruiser into a pedestrian in Downtown Louisville. Part of that discussion was about the word “accident” and whether we should use more accurate words like crash or collision to describe such events—we should. (We also brought the topic up this past February in the context of cycling and “bikelash.”)

Many in Louisville’s local media already are using the words crash and collision in their reporting, which is a welcome sign. But others are not. But why is this an important distinction in the first place? Alissa Walker at Gizmodo gets us started by noting, “Accident is the transportation equivalent of ¯\_(ツ)_/¯.”

Calling it an accident is a problem because it immediately exonerates everyone involved. Even if a driver was drunk and driving too fast the wrong way down a one-way street while texting, an “accident” says it was all just a big misunderstanding.

Vox’s Joseph Stromberg added some history to the term, tying it back to the early- and mid-20th century marketing efforts of the automobile industry:

The National Automobile Chamber of Commerce, an industry group, established a free wire service for newspapers: Reporters could send in the basic details of a traffic collision, and would get in return a complete article to print the next day. These articles, printed widely, shifted the blame for crashes to pedestrians — and almost always used the word “accident.”

That term took off in future years and became the most common way to describe collisions. It’s impossible to attribute this solely to the wire services’ articles, but at that early juncture in automotive history, they certainly played a big role.

“The word suggests an event that takes place without foresight or expectations,” public health researchers Hermann Loimer, Mag Dr iur, and Michael Guarnieri wrote in their history of the word accident, according to Vox. “Yet such events as a group are not random and do not occur by chance; they can be expected to happen.”

Even the AP Stylebook now discourages using the term “accident.”

Now, a new campaign from Transportation Alternatives and Families for Safe Streets is asking for us to sign on to a challenge not to use the word accident—and we urge all of our local media, politicians, and citizens to join the “Crash Not Accident” challenge. I already did. Similarly, if you see Louisville media using the word “accident,” let them know there’s a better way to discuss traffic violence by using the hashtag #crashnotaccident. According to the campaign:

Before the labor movement, factory owners would say “it was an accident” when American workers were injured in unsafe conditions.

Before the movement to combat drunk driving, intoxicated drivers would say “it was an accident” when they crashed their car.

Traffic crashes are fixable problems, caused by dangerous streets and unsafe drivers. They are not accidents. Let’s stop using the word “accident” today.

Writing in Mother Jones, blogger Kevin Drum dismissed the campaign using his dictionary to dismiss the value of changing the words we use. But Caroline Samponaro, deputy director at New York–based Transportation Alternatives, says that approach is “really missing the point.”

“There’s a value attached to that word, which is the point of the [#CrashNotAccident] campaign. It doesn’t imply there’s something serious we should look into,” she told Broken Sidewalk. “Changing the word you use does have an impact on the larger culture change.”

Samponaro likened our current traffic violence problem to a public health crisis. “If these numbers were this high in another realm of life, like disease, people would be alarmed,” she said. “The fact that the word ‘accident’ has effectively disguised what’s going on as an ‘oops’ has, in New York City and across the country, shown that we haven’t appropriately reckoned with the problem going on right before our eyes.”