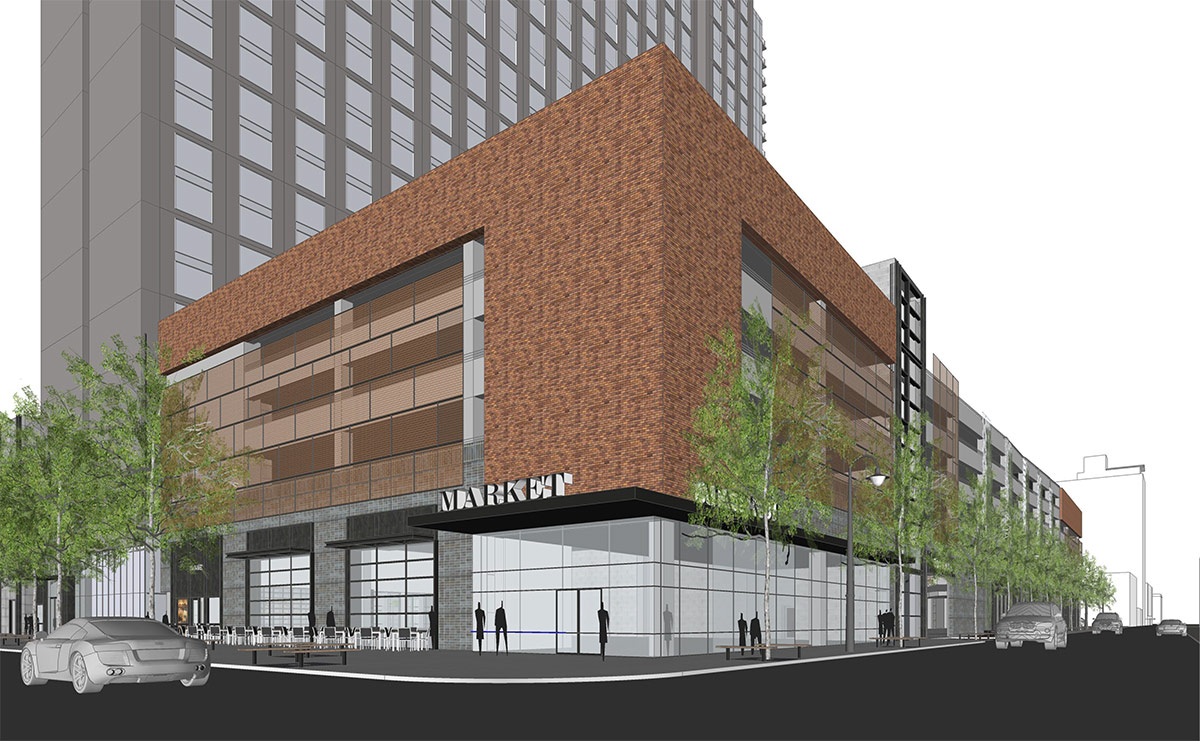 “The meeting was incredible,” Brent Bucknam said, describing the hours-long discussion of the Downtown Development Review Overlay (DDRO) committee on Wednesday. Bucknam is an ecologist and designer from Oakland, California who I met in June at the Water Company Block charrette, and he has some amazing ideas to improve the Omni development and Louisville overall. “We saw a surprising showing of architectural values from the DDRO committee,” Bucknam continued, clearly happy with the meeting’s outcome. “I was extremely excited to see that. I was really impressed by the public process.”

In the end, the committee stood its ground after hearing from the community and expressing concerns of its own over the $289 million Omni plan. The committee delayed its vote on the project for two weeks—a small move with big meaning for those advocating for a better design. The decision essentially sends designers from Dallas-based HKS Architects back to the drawing board to reconsider several components of the project, including a lack of street-level activity along Third Street. The committee will reconvene to discuss the project again on Wednesday, July 29.

How the meeting played out

The packed DDRO meeting convened at 8:30a.m. on Wednesday and the committee members heard from dozens of concerned citizens before taking up the development among themselves. Bucknam said the vast majority of those who spoke were in favor of the Omni, but they sought improvements that would ensure a project the city could be proud of from all angles. Many spoke out against the lack of transparency that has riddled the public process thus far and about saving the historic 1910 Water Company Building that sits in the Omni’s footprint. The video above was going to be shown to the committee, but technical difficulties precluded any digital presentations from the community.

One major point of contention was a surprise new design from Omni. The committee had been studying original documents submitted as part of the project’s development plan to prepare for the meeting—the same drawings provided to the public and the same that we recently analyzed. But Omni and the city presented a new design Wednesday morning to the surprise of committee members, who were disappointed by the switch.

“It’s too big of a project for the committee to make a decision with all new drawings that morning,” Bucknam said. “They were frustrated that they were looking at two different things.” And we already know that the quality of this mega-project will be in the details.

So what’s changed? Quite a bit, actually. Let’s once again delve into some design drawings now that the value engineering has apparently begun.

A fresh look at the updated Omni design

One of the biggest changes is cutting the facade budget of the L-shaped towers. Original plans showed the towers clad in charcoal-colored brick veneer. In the new plan presented Wednesday, that brick has been removed and the cladding material is indicated as precast concrete panels. With a nearly identical square window patterning, this means the Omni towers will appear very similar to the bland Marriott to the north.

The Omni team saved another $500,000 by removing glass from two enormous stairwells on Liberty Street. Those masses, expressed as strong elements of the building’s design in original renderings, are now covered in metal panels. In exchange, Omni revealed the parking garage’s stairwell on Third Street with a new glass facade.

The lack of true public amenities in the project also became apparent. Bucknam noted that according to the official Omni plans, there are no provisions for real public space despite original glossy renderings showing sidewalks packed with people and promises of Liberty Street as Louisville’s new pedestrian wonderland.

“Everyone thinks you need significantly more public space,” Bucknam said. “There’s no placemaking on the street except if you’re eating at the restaurant—that’s not really viable public space.”

On Second Street, a 24-foot notch in the landscaped median remains at the alley, but the 26-foot notch at the main entry has been expanded to 137 feet, eliminating many trees from the streetscape.

Omni also provided more information about the so-called the “urban lifestyle market,” which is sounding less and less like a grocery store by the day. Thankfully, the split-faced concrete block that clad the original market and the entire expanse of Third Street is now shown as brick veneer.

The overall size of the market has been reduced slightly from its original 20,200 square feet to 19,800 square feet (although before plans were released, the store was being marketed as 25,000 square feet). The number of ground-level parking spaces dedicated to the market has increased from 40 (the amount currently required by code) to 46. At about 200 square feet per space, that’s an additional 1,200 square feet for parking. We’re still calling for an elimination or significant reduction in the parking requirement.

City officials had promised a full-service grocery at the site, but new details acquired by Insider Louisville show that the market won’t even come close. Jeff Mosley, deputy chief of Louisville Forward, told Insider that Omni will operate the market, which will be based on two non-grocery stores: Eataly in New York City—which sells gourmet specialty products at exorbitant prices and is more a place people go to sip wine and eat burrata than shop for a groceries—and Eatzis in Dallas—which according to Insider, is a “market and bakery chain that offers casual dining and pastries, sushi, wine and beer, a coffee bar, and specialty cheeses.”

These two examples are clearly not full service grocery stores, and Insider noted that the space might never actually have a grocery at all. According to its development deal, Omni “has the right to lease the space to any business it wants if it fails to land a grocery store within six months of the hotel’s opening date.”

Both the original and the updated plans create a deadening canyon along Third Street, however. New designs show five fake retail spots called “vitrines,” up from the original three. These billboards are like wallpaper on the blank wall, providing to actual active use along the building’s 450-foot expanse. (Similar vitrines can also be seen on the dead walls of the Marriott.)

Metal panels covering the parking garage above the market were originally described as copper, but new plans indicate the screen as simply a “perforated metal panel” and tinted concrete on the parking garage is now shown as regular concrete with a “special coating.” In a rendering sleight of hand, seven trellises that were shown in the original now appear as five covered in more green plantings.

Finally, around onto the alley, new renderings show a barrage of “local” murals painted onto the concrete and brick without significant other changes. While this is technically the back of the building, it still stands over 60 feet tall and will be exposed for years, visible from Muhammad Ali Boulevard.

Overall, the design is certainly a bit more refined and better detailed. With the community input from the meeting and the charrette, the Omni could be a huge win for Louisville.

What’s going on with the future development site?

Besides the design of the Omni itself, Bucknam said another concern raised at the meeting is the giant question mark hovering over the “Future Development Site.” Bucknam said the Omni team refused to commit to saving the Oddfellows Hall as part of a future development and had no specifics of what might be built as part of Phase 2. Committee members wanted to know more about what the future plans for the site might be, even though they’re years away. Bucknam said a common sentiment in the room seemed to be, “You can’t really judge this thing unless you design the whole project.”

The community pulls through

“In my mind, it was the Water Company Building that served as a catalyst that allowed people to ask, ‘What’s happening here?'” Bucknam said. “Then people started looking at the building itself.” The charrette was organized in response to the threats against the Water Company Building—it was organized before the design was even publicly released—but at the event, people began to see the larger issues of the project and organized to improve the plan. “I think there’s an upswell of community interest—and among the DDRO. People are saying, ‘Let’s make this better.'” (Also, if you haven’t signed Preservation Louisville’s petition to save the historic buildings on the site, you can do so here.]

The DDRO’s delay to vote on the project is a major move for the committee. “The decision was a minor victory, but also a huge win,” Bucknam said. “There’s pressure now—we have more leverage. We’re in a place now where there’s the possibility for some bold alternatives.”

This gives the community two weeks to work with Omni and HKS on improving the design. “Let’s intensively spend two weeks and collaborate,” Bucknam said, optimistic that a better design will emerge.

Bucknam will be back on July 29 for the next meeting, and we’ll be watching closely to see how Omni and the city respond to the DDRO’s decision. This project, as Mayor Fischer so often puts it, is certainly about nothing more than the “transformation” of Downtown Louisville—and that’s no small deal. It’s best that we get this one right.