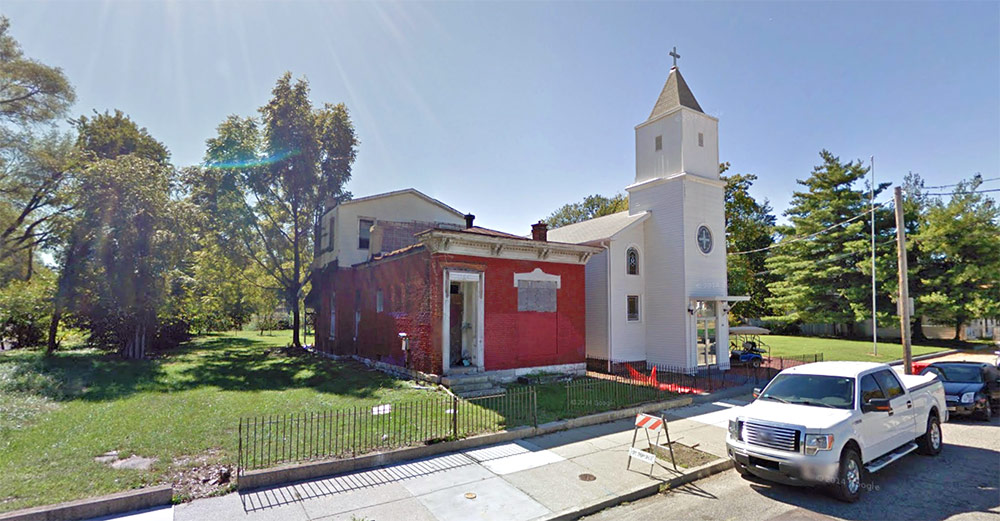 We don’t go into detail here on Broken Sidewalk on the vast majority of demolitions that take place around the city. We stick to the most important structures and the biggest losses to the community. But every month, about an entire block’s worth of houses scattered across the city vanishes into thin air.

As preservation skeptics are all-too-fond of pointing out, not every building can be saved and not every building is historic. We agree, but it seems someone brings up that old argument every single time a building in Louisville is set to be torn down, no matter the merits of the structures at hand.

Most of the demolitions that take place around the city are run down wooden houses that are too far gone to save, but mixed in are a handful of jewels that the community will later regret tossing to the curb.

This is the first in a monthly series documenting the demolitions that take place around the city—whether they’re worth saving or not. Most of these go unnoticed, yet they are the reason Louisville remains pocked with vacant land. And they represent a significant loss to the city’s prized collection of shotgun houses, which are disappearing fast.

We hope by exposing the extent of demolition going on in the city, others will realize just how much we are losing each month. We’re certainly not advocating to save all of these buildings, but where else will they be eulogized if not here?

This one should have been saved. At first, we thought this once-beautiful brick and stone house on 23rd Street was part of MSD’s plan to raze 128 homes in the area, but it turns out that it’s owned by a private company and sits just beyond the demolition zone. The house still appears to be sturdy and would have made a great candidate for renovation. It sits just a half block from Broadway and a stone’s throw from the planned West End Walmart, which would have made it an ideal walkable location. But it appears the city is throwing out the notion of walkability in this part of town anyway.

This is another one that should not be torn down. This sturdy brick shotgun house has definitely seen better days, but it’s structural bones appear to be good and it sits right across the street from the reconstruction of Sheppard Square in the quickly revitalizing Smoketown neighborhood. Its site nestled against the old church also adds to the charm of the street and the lintels above the main window feature hand-carved stone. The original cast-iron fence set in a limestone base also lines the sidewalk. Making it doubly tragic, this one is owned by a public agency, the Louisville Metro Housing Authority.

We’ve already gone over this disappointing demolition plan put forth by MSD, and based on reader feedback, Louisville residents aren’t too pleased. We’ve added it into this roundup since its demolition permit can be issued next week. This is one of the last commercial storefronts of its type in Louisville and there’s absolutely no reason this property couldn’t be saved in place or moved to a vacant lot. If you’d like to make a last ditch plea to save the structure, you might try calling MSD Customer Relations at (502) 587-0603 or call Preservation Louisville at (502) 540-5146 and urge them to make a stand. It’s a shame to see this tiny shotgun house go, as it still features its original wooden detailing including gingerbread shingles on its front facade. The house stands as one of the more ornate structures on its block There are already a number of missing teeth on the block and a handful of infill houses are being built with larger side yard spacing, reducing the area’s density.

Another former beauty owned by a city agency will bite the dust. This two-story home will be the first missing tooth on its block.

The photo shows the back of the building facing Tyler Avenue, a sort of Portland neighborhood alley, but this shotgun house looks like many others in the city. It’s just one more missing tooth in an area pocked with vacant land.

It looks Churchill Downs has plans for the corner of South Third Street and Central Avenue. The racetrack has been buying up land in the area to the east of the Twin Spires and much of this block is owned by CD or Metro Louisville.

Owner: The Estate of Elsie McAtee
Demolition can take place after: April 4, 2015

A lot has changed in this part of Dixie Highway, especially along the commercial corridor. What was once urban is now, well, not particularly recognizable. The neighborhoods have fared better, but here’s one more vacant lot for the area.

Shelby Park is one of Louisville’s hottest neighborhoods, located right next to Germantown and Old Louisville and just a few blocks from Downtown. It’s always a shame to see a house on a mostly intact area bite the dust.

This shotgun house has definitely seen better days. It’s a shame that the mature tree in its front yard will likely be a casualty of the demolition, what with Louisville suffering from the worst urban heat island effect in the country.

Just one more shotgun about to be blasted away.

Owner: The Estate of Albert Roth
Demolition can take place after: April 9, 2015

Owner: The Estate of Delbert King
Demolition can take place after: April 10, 2015