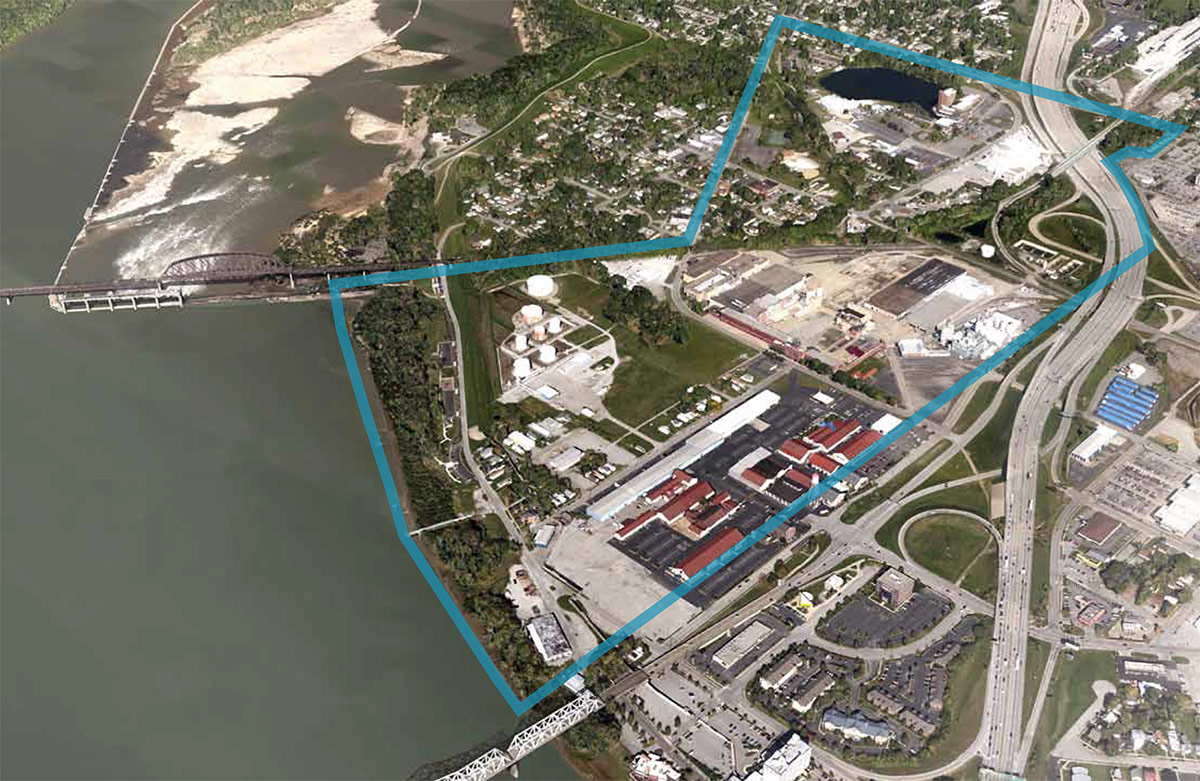 Clarksville has been debating what to do with its waterfront for years. Peering across the Ohio River from Louisville’s Belvedere, you can see the famous Colgate Clock in the distance, but the foreground is a flat mass of mostly nothing. There are remnants of industrial chemical storage tanks, a smattering of houses, trees, and a large levee, and little more. Peering back from the Clarksville side, there’s an enormous amount of opportunity to build an entire neighborhood—with great views of the Louisville skyline.

Now, an entirely new plan is in the works to do just that.

We first covered a major redevelopment scheme for the area way back in 2008, which called for a cluster of small-town urban buildings lining streets in front of the old Colgate factory. That plan was a start but lacked an ambition that would make the area really shine. Years after that plan fell through, another even less exciting plan was proposed that also went nowhere.

Clarksville still knows what an asset it has in its underutilized waterfront, and a third plan is in the works to redevelop a large swath of land that looks beyond the Colgate Plant to envision a holistic district and create a vibrant place. The next chapter of that project unfolds tonight.

Getting underway in March, the initial draft was put together with MKSK and “developed through visioning sessions with Town leadership and a project steering committee,” according to MKSK. The site under consideration stretches over 320 acres from the Ohio River on the south to Stansifer Avenue including the former Marathon Oil facility, the old Colgate factory, Water Tower Square, Louisville Metro KOA, Derby Dinner Playhouse and the Clarion Hotel.

In May, MKSK held a community workshop to discuss initial ideas about the site.

“The MKSK team led by project manager Justin Goodwin introduced the community to the planning process, shared initial study findings, and ideas about emerging opportunities to be explored in more detail through the planning process,” MKSK wrote on its website following the May workshop. “Potential sites identified for redevelopment include the former Marathon Oil terminal and the old Colgate-Palmolive manufacturing complex, now shuttered but recognized as Clarksville signature landmark.”

To build on that meeting, Clarksville partnered with tech company Socialmentum to create a MySidewalk website that gauges public input through online comments. The online approach hopes to garner a larger response than is typical from public meetings and workshops, Clarksville Redevelopment Director Nick Lawrence told the News & Tribune in July. “We tried to have a public workshop on [Eastern Commons Park] and maybe two people showed up,” he said.

The goal is to define a walkable, mixed-use district along the waterfront. Ideas include apartments with views of the Louisville skyline, a hotel, plenty of retail, and new office space—potentially even a new corporate headquarters—filling the largely vacant land along the waterfront

Tonight, the public can get a progress report from MKSK and weigh in with ideas. The MKSK team will detail its recommended plan, “which will focus on redevelopment opportunities for the Clarksville riverfront and adjacent lands, and recommendations for infrastructure and revitalization improvements throughout the study area,” according to the city, and gather community feedback. Strategies for implementing the plan will also be discussed.

On Tuesday, November 10, the community is invited to help plan the future of the Southern Indiana town’s waterfront at the “Envision South Clarksville” workshop. The meeting takes place at 6:30p.m. at Ohio Falls United Methodist Church, 917 South Virginia Avenue in Clarksville.

A final plan will be presented to the Town of Clarksville Redevelopment Commission in December. MKSK is working with Hannum Wagle & Cline (HWC) Engineering on the project.