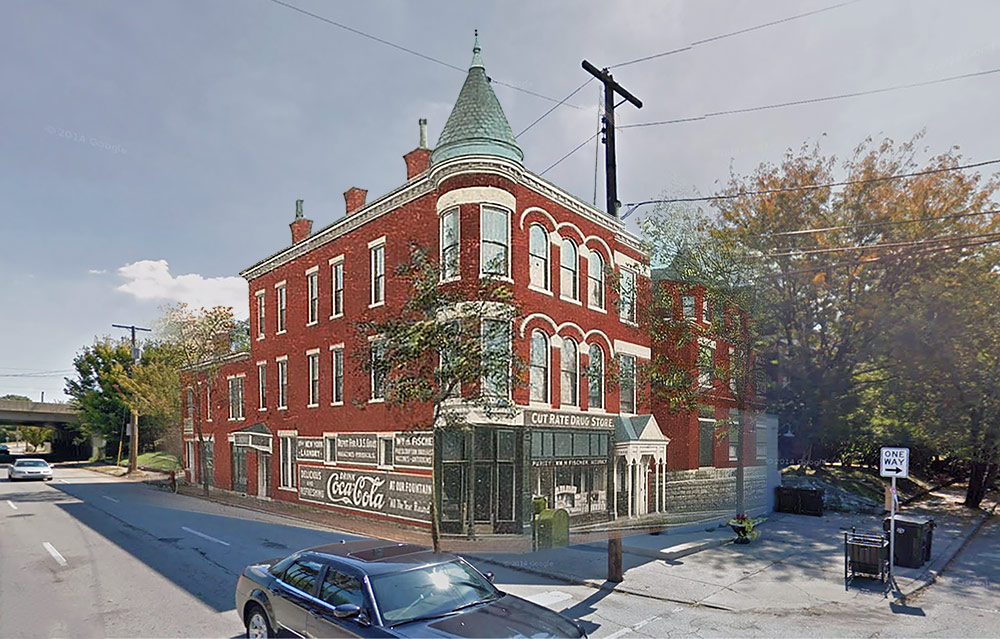 This gorgeous corner commercial building landed in our inbox from a tipster. Looking at the colorized postcard photo (below), it’s easy to think this is another long-gone Louisville treasure. But the turreted, three-story building still stands today on the southeast corner of Brook Street and St. Catherine Street in Old Louisville. It has, however, lost a little—okay a lot—of its former glory.

The old postcard shows Fischer’s Pharmacy, advertising itself as a “cut rate drug store” over its commercial storefront. Enormous glass windows clad the Brook side of the building while a number of hand-painted advertisements can be seen on the St. Catherine Side.

The structure’s original design boasts some of the finest Victorian neighborhood commercial architecture in Louisville, with a setback residential entrance on Brook Street under an ornate wooden portico. The Brook Street facade had three enormous arched windows (just check out how big they are compared to the doorway!) on both the second and third floors and robust, rusticated lintels can be seen over the windows. On its St. Catherine Street facade, two small storefronts can be seen on the eastern edge of the structure along with another residential entrance. The entire building is topped with a modest cornice line.

(While this style is rare for commercial architecture in Louisville, another turreted corner commercial building sits at the corner of Second Street and Burnett Avenue with its own unique architectural styling.) The building today, at 1101 South Brook Street, is still sturdy as ever, if a little shorter and covered in a less-than-contextual concrete block appendage. Where the original building was aligned with the setbacks of the surrounding houses, the modern addition pushes the first floor closer to the sidewalk. Still visible is a round stone detail that formed the base of the turret, sitting above the building’s original main entrance. The St. Catherine Street arrangement is largely the same today, sans the third floor, while the Brook frontage has been drastically altered, having lost its ornate windows.

If you look closely at the texture of the brick on the building, you can tell where the original ends and new brick was put in place some time ago. We’re not sure what the story is behind the lost turret and third floor, but fires are often to blame for such alterations. If you have any details on the structure’s history, please leave a comment below.

[UPDATE: A reader tells us the top floor was, in fact, torn off after a fire sometime in the 1970s.]

This corner of Old Louisville bore the brunt of Interstate 65 slicing through the area, yet it remains remarkably intact for being so close to the highway. The elevated behemoth divides the neighborhood from Shelby Park and Smoketown to the east, and an off-ramp on St. Catherine Street creates pedestrian barriers as cars zoom past.

As always, send your tips, ideas, and old postcards to tips@brokensidewalk.com.