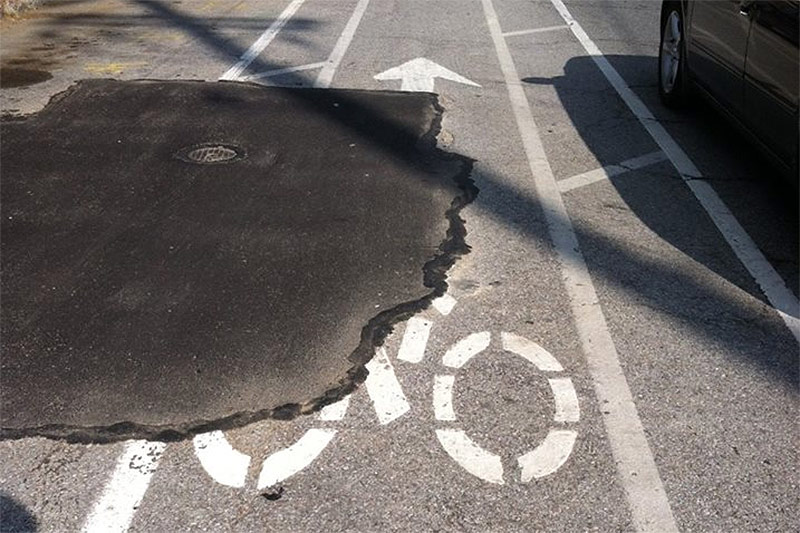 Louisville’s bike network is growing—and that’s great news. But streets need maintenance, and so do bike lanes. Bike traffic is not nearly as damaging to the road surface as automotive traffic, but there are other ways a bike lane can deteriorate. Lanes are often in the path of underground utilities that require digging into the roadbed. If the street is not properly patches, the bike lane suffers. In other places, paint might simply wear away over time, leaving little trace that a bike lane ever existed at all.

City streets that are in bad shape can result in a rough ride for a motor vehicle, but can be downright dangerous to a cyclist. To help combat poort bike lane conditions, Rolf Eisinger at the city’s Bike Louisville departments is asking the community for help.

“Does your bike lane look like this on your commute?” Eisinger asked on the agency’s Facebook page, illustrating the post with these examples of broken bike lanes. “Public Works is working with our Utility Companies to ensure the bike lanes and markings are restored to a smooth surface with the correct markings.”

Bike Louisville wants to hear from you about where the rough spots are, or where the lane markings have sometimes completely worn off, on your bike commute. You can send images of bike lanes that need maintenance—be sure to include location information!—to Rolf at Rolf.Eisinger@louisvilleky.gov.