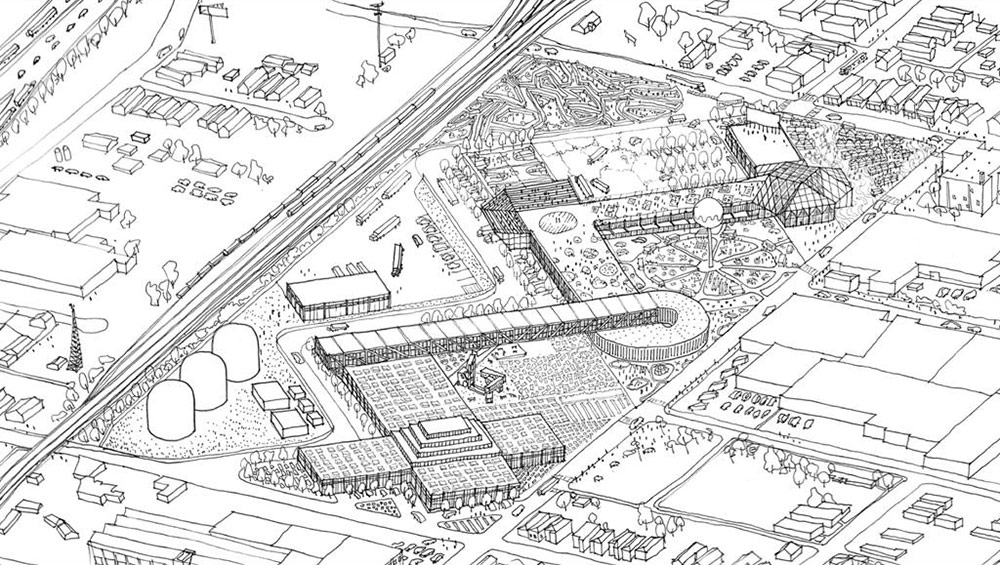 Louisville hasn’t seen a week like this week’s international architectural press since the old days of Museum Plaza. Coincidentally, it’s the same architecture firm bringing in all the attention—Office for Metropolitan Architecture (OMA). While we broke the news about the design of the West Louisville Food Port (née Hub) in early January, the design of the project at 30th Street and Market Street in Russell hit the architectural blogosphere anew this week when OMA sent its own press release.

OMA is one of the architecture world’s hot shots, and when they speak, people listen. So blogs across the world picked up Louisville’s Food Port and held it in the international spotlight for another cycle of the news before moving on to the next high design building somewhere in Scandinavia, China, or Dubai. Check out reports from Dezeen, Designboom, Archdaily, Curbed, Inhabitat, Mother Nature, Archiportale, and BauNetz.

“The diversity of program reflects the full food chain, as well as a new foodscape of public spaces and plazas where producers and consumers meet,” OMA’s partner-in-charge Shohei Shigematsu said in the press release. “The Food Port acts as a catalyst to activate the surrounding neighborhoods, exemplifying one of the complex urban relationships between architecture and food that our studio is investigating.”

Seed Capital KY, who is actually building the facility, has also issued an update. On Saturday, March 7, the West Louisville FoodPort Community Council will hold a free, community meeting to discuss the Food Port and food-based economic development. If you’re among the first 150 to show up, they’ll also give you a free boxed lunch made with local ingredients. According to Seed Capital KY:

During this lunchtime event, we’ll live stream Seed Capital KY Co-Founder Stephen Reily as he presents at TEDxManhattan on the need for economic and community development tools to meet the demand for local foods and better build the local food economy; Mayor Fischer will speak on the State of the Local Food Economy; and we’ll take a closer look at the FoodPort project through a brief overview followed by an open Q&A with 4 businesses committed to locating at the site: KHI Foods, Star Distributed Energy, The Weekly Juicery, and Jefferson Country Cooperative Extension.

The West Louisville Food Port is expected to break ground in late summer of 2015, with businesses opening in phases. For more information on the project, check out our original story here.