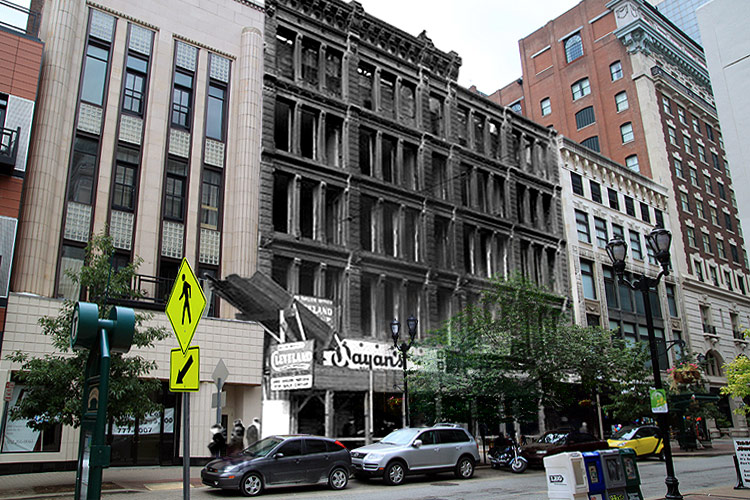 We’re lucky in that Fourth Street through Downtown Louisville has a fairly intact street wall. It’s not all historic, it’s not all pretty, and certainly not all of it contributes to a vibrant streetscape, but for the most part it forms an urban edge along the sidewalk that keeps the street feeling, well, urban.

There’s one notable “missing tooth,” however, next door to the Seelbach Hotel at 526 South Fourth Street. Today, that parcel is a surface level parking lot, but it obviously wasn’t always that way.

This five-story building, shown in the vignette at top under demolition in 1941, was called the Abe C. Levi Building (not to be confused with the Levy Bros. building at Third and Market streets) and carried the building height of its neighbors down Fourth Street. Much of this section of Louisville had a consistent five-story building height a century ago, making what must have been an impressive cityscape.

The building housed a series of department stores, including the Abe C. Levi Company and later Mangel’s. We’re unsure of what caused the building’s demise so early in the 20th century (we refuse to call a 74 year old parking lot historic), but the storefront image above of Mangel’s closing in 1940 shows that it was likely a planned event. (Take a look inside Mangel’s store here and here.) If you have any information about the building or the site, please share it in the comments below.

Also notable is the Bycks’ building to the south, which in the views here sports an older, more traditional facade. Today, that building has been converted into the Bycks Lofts and shows off a streamlined Art Deco facade.

And now, a before and after view: