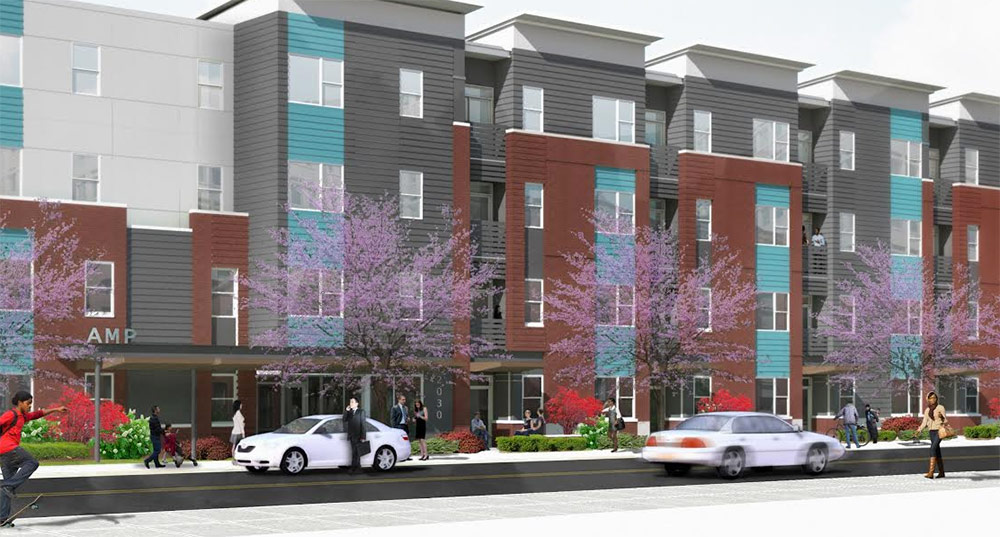 Indianapolis-based developer Milhaus has released new details on its under-construction Frankfort Avenue apartment building in the Clifton neighborhood that the company is calling AMP—what Milhaus said is “a nod to the former use of the site” as the Ready Electric Company. The new four-story building at 2030 Frankfort Avenue will bring 93 new studio, one-, and two-bedroom apartments to the urban corridor. The project—Milhaus’ first in Louisville—is estimated to cost $10.8 million. Millhaus purchased the 1.6 acre property last October for just over $1 million.

Branden Burke, Milhaus’ director of development for the Louisville market, told Broken Sidewalk that his company is excited to be expanding into the city and is looking forward to building more here in the future. Burke grew up in Santa Claus, Indiana and knows the city well. Approaching the Frankfort Avenue site, Burke said Milhaus wanted to do right by a neighborhood still reeling from a development fight years ago at the Clifton Lofts, across the street from AMP. “We were cautioned right away,” Burke said. “We took the time to hear the community out. We went to several local community and business meetings. We really got a feel with what could have gone better with [Clifton Lofts].”

According to Milhaus, the building’s design is inspired by the mid-century modern period and was designed by Indianapolis-based DKGR Architects, pronounced “dark gray.” Burke said the facade is broken up into a series of smaller masses to help it fit more naturally in a corridor of lower-scale buildings and historic houses. Brick and painted Hardie panels make up the facade, and horizontal detailing in the brick give the building a distinctly modern feel. Burke said his company is not trying to replicate the historic architecture in the area, but instead make a contextual building that fits. He added that the design team scrutinized details such as the brick mortar color to help it better match the neighborhood.

Burke said AMP will offer higher-end finishes including integrated USB ports and bike storage. And while this project is Milhaus’ first with the architect, the developer’s portfolio shows a number of high-quality projects that we hope reflect how the AMP will turn out. He noted that the project is a “low amenity” building with no fitness center or community rooms. “Overall, our amenity is Frankfort Avenue,” Burke said.

Still, the neighborhood raised a number of complaints about the project. “We got pounded pretty hard on some of the parking issues,” Burke said. The AMP plan calls for 115 on-site parking spaces for the 93 units, yet some business owners were still upset. “While it is great that they’re doing something to the property and it will bring more people to the neighborhood, there was really bad experiences with Clifton Lofts,” Judy Fout, owner of A Reader’s Corner, told WDRB last fall. “Where are they going to park their cars? Where are our customers going to park their cars?” Deonte Harris, general manager of Shiraz Mediterranean Grill, asked the television station.

Burke said building height was another major concern. AMP is configured as an L-shaped structure with four floors. Milhaus eliminated first floor retail space as a concession to the height concerns. “We received some pushback on the retail component,” Burke said. He noted that, to make the project work financially, Milhaus wanted four floors of apartments. The retail base would have bumped up the overall building height. He added that Kentucky plumbing codes also make building tall difficult, as taller structures require more expensive cast iron pipes.

Milhaus said in a press release that the name AMP reflects the “area’s lively and engaging character, heritage and traditions,” but we were a little underwhelmed to see that the new building wouldn’t contribute to the street’s, well, spark. Such a large street frontage without any retail on one of Louisville’s premier commercial corridors—especially since the retail potential breaks down to the north along a string of historic houses—won’t bring the same energy as a project with a retail component. Frankfort Avenue needs not just new residents and infill development, but it should also seek out additional measures to enliven the sidewalk. AMP brings a needed development and new residents, but it will leave an unfortunate sidewalk “dead-zone” for years to come.

The influx of new residents in the area will still help boost the neighborhood’s other retail offerings, at least. And this stretch of Frankfort Avenue will begin to feel more urban, with new buildings lining each side of the street. Louisville continues to linger in the urbanism limbo between reliance on cars—and the detrimental issues that stem from that reliance like dealing with vehicle storage—and that point when density makes a truly urban lifestyle possible. While parking complaints won’t go away, hopefully soon the city overall will realize that more people living within walking distance of “live, work, play” amenities will mean fewer people need to park their cars to sustain a vibrant retail scene.

Leasing for AMP begins in may and the first tenants are expected in August. Stay up to date with the leasing announcements on the project’s website.