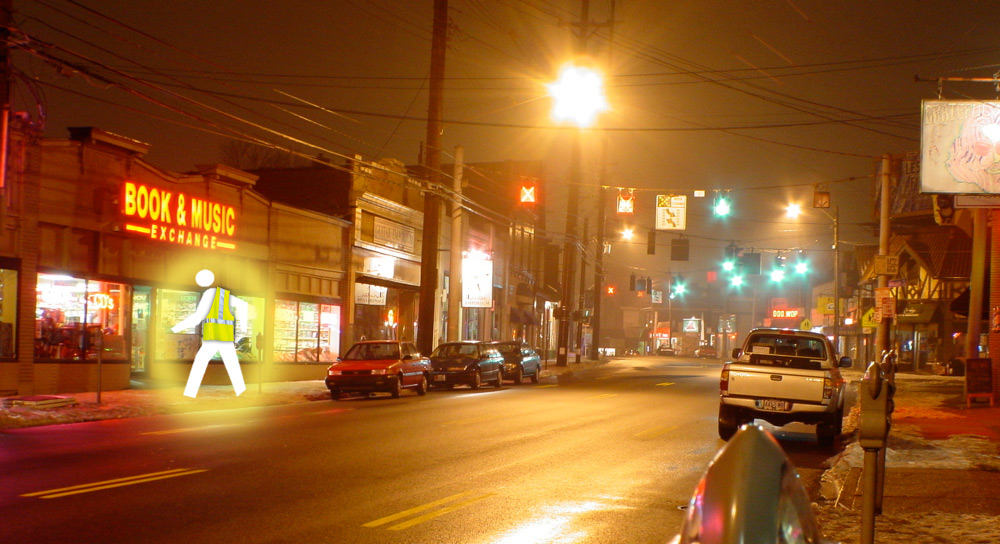 If you’re out walking after sundown, you’d better be glowing in the dark or else it’s your own fault if you get hit and killed by a motorist. As part of the city’s Look Alive Louisville pedestrian-safety campaign, one approach of the Louisville Metro Police Department has been to blame the victim. The LMPD claims that a large amount of pedestrian deaths are the the fault of the victim—and one thing that the LMPD says makes a crash your fault is wearing dark clothing. According to LMPD figures, last year 49 pedestrians were struck while wearing dark clothing, with four fatalities.

Municipalities who want to appear like they’re addressing pedestrian safety suggest—in the name of safety—that their pedestrians don reflective clothing and lights. They put the burden of safety on the pedestrian rather than the person driving the two-ton car capable of doing real damage.

This exact scenario is playing out right now in Louisville. The Look Alive Louisville website suggests that pedestrians “Wear bright colors, Wear reflective clothing, [and] Carry a flashlight.” Adding, “Make eye contact with drivers so you understand their intentions and they understand yours.” The Courier-Journal even went as far as to suggest that Louisville pedestrians wear silly reflective vests as they walk around our city.

The same recommendations were lambasted on Streets.mn earlier this year when writer Nathaniel Hood said, “You might look ridiculous, but it’s better than being dead or having driver’s to slow down or designing our streets and places for people.” Eben Weiss also addressed the problem in his Washington Post piece, “Don’t make bicyclists more visible. Make drivers stop hitting them.”

The more we can all do to stay safe collectively—to stay more visible—the better off we’re all going to be. If you are a pedestrian who is going to be walking at dusk and dawn, it would be more safe if you wore brighter clothes or a blinky light if you’re walking your dog or walking to the bus stop, or wear reflective apparel. It just makes you easier for your fellow motorists to see you in those dim or dusk light conditions.

This line of thinking sets up a narrative that enables victim blaming. If a pedestrian didn’t have a flashlight, they are responsible for his or her own death. If someone is wearing dark clothing, they’re just asking to be hit by a motorist.

This notion of “pedestrian error” is pervasive in how stories of pedestrian death and injury and reported and investigated. Longbeachize describes the common problem among media covering traffic violence, noting that reporters tend to “call the cops, ask for reasons, and play on those reasons provided,” which can inadvertently set up an article that blames the victim.

As Next City’s Rachel Dovey pointed out last August, “pedestrian error” doesn’t tell the whole story. “There are a lot of areas where the choice is to be in the roadway or in the grass or a mud path,” Baltimore urban planner Allysha Lorber told Dovey . “Sometimes there’s a sidewalk but often it’s bumpy or has poles sticking out of it or is overgrown with vegetation. There aren’t a lot of crosswalks, and pedestrians are everywhere.”

It’s difficult to collect data from scenes of traffic violence. “The determination of fault happens for civil liability — whether the drivers’ insurance company is paying,” Heather Strassberger, a professor and former city planner in Baltimore told Dovey. “That doesn’t allow for the officer to determine that both users are doing the best they can on an imperfect road and that the road wasn’t designed very well. It doesn’t cover the whole picture.” Dovey also points out: “The determination comes partly from the motorist’s word against the pedestrian’s and — in the case of fatal accidents — the walker is dead.”