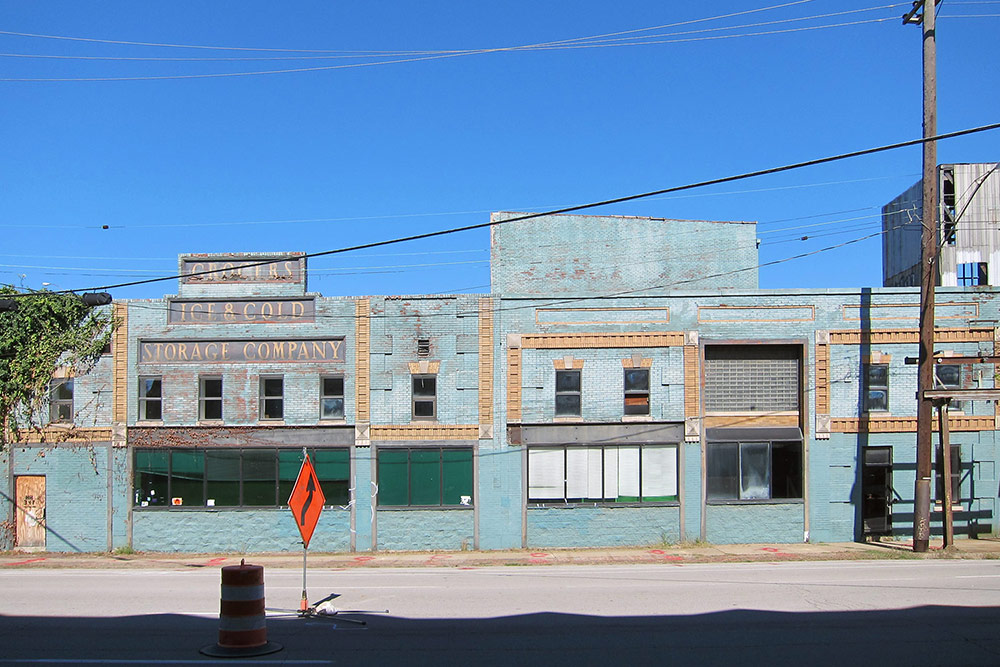 In early January, we saw workers patching up a brick wall on the back of the Grocers’ Ice & Cold Storage on the corner of East Main Street and Hancock Street in Butchertown. The building had been purchased by the Kentucky Transportation Cabinet to make room for the enormous expansion of Interstate 65 leading into Spaghetti Junction as part of the Ohio River Bridges Project.

That maintenance meant that what was left of the buildings was spared from the wrecking ball, but the structure’s future was still uncertain. This week, we got a little more information as the KYTC put the structure on the market.

The structure at 609 East Main Street is a shadow of its former self. Built in 1906, the building was expanded and modified in 1920 and 1952, according to state documents. Its top-most stories were lopped off in 1991 after a fire tore through the building. The structure is built of brick and limestone, now mostly painted green. Accent bricks delineating a series of yellow rectangles gave the structure a distinctly modern look.

The building’s western neighbor, a three-story corner commercial building, was torn in the ’70s—not that it would have lasted past the highway expansion had it remained intact. The KYTC demolished a chunk of the building along Hancock and Washington streets, but the Main Street Side appears unchanged, save for a few vines slowly consuming the structure.

What’s left of the building’s Main Street facade will be protected. Since the property went into state hands, a historic preservation easement was added to the property requiring future owners to keep the historic front. State documents show that the building is a contributing structure in the Butchertown Historic District and was listed on the National Register of Historic Places in 1976.

Today, the former cold storage warehouse is an odd mass covering 44,600 square feet on several levels. Before KYTC purchased the building, it served as the office and warehouse for Creation Gardens. Then, the structure reportedly had a leaky roof that made business difficult. KYTC paid $3.6 million for the property in March 2010, according to property records.

“With some hard work and good old-fashioned elbow grease, this historic building could shine again,” reads a brochure advertising the building’s sale.

The structure is located directly west of the now-under-construction Main & Clay Apartments, where 260 residences will fill a seven-story building. Across the street is the Goodwood Brewery and another residential building. On the other side of the interstate is Slugger Field and the under-construction Angel’s Envy Bourbon Distillery. Nulu’s main drag along East Market Street is a block away.

No asking price is included with the listing, and bids from interested buyers are due before 1:30p.m. on Tuesday, November 24. Open houses are scheduled for Monday, November 2 and Monday, November 9 from 10:00 a.m. through 2:00p.m. Find more information on the KYTC website.

In the meantime, what would you like to see at the property? It’s proximity to the highway makes it a poor fit for residential use, but it could make for some interesting office space or a really cool brewery or distillery. Share your thoughts in the comments below.