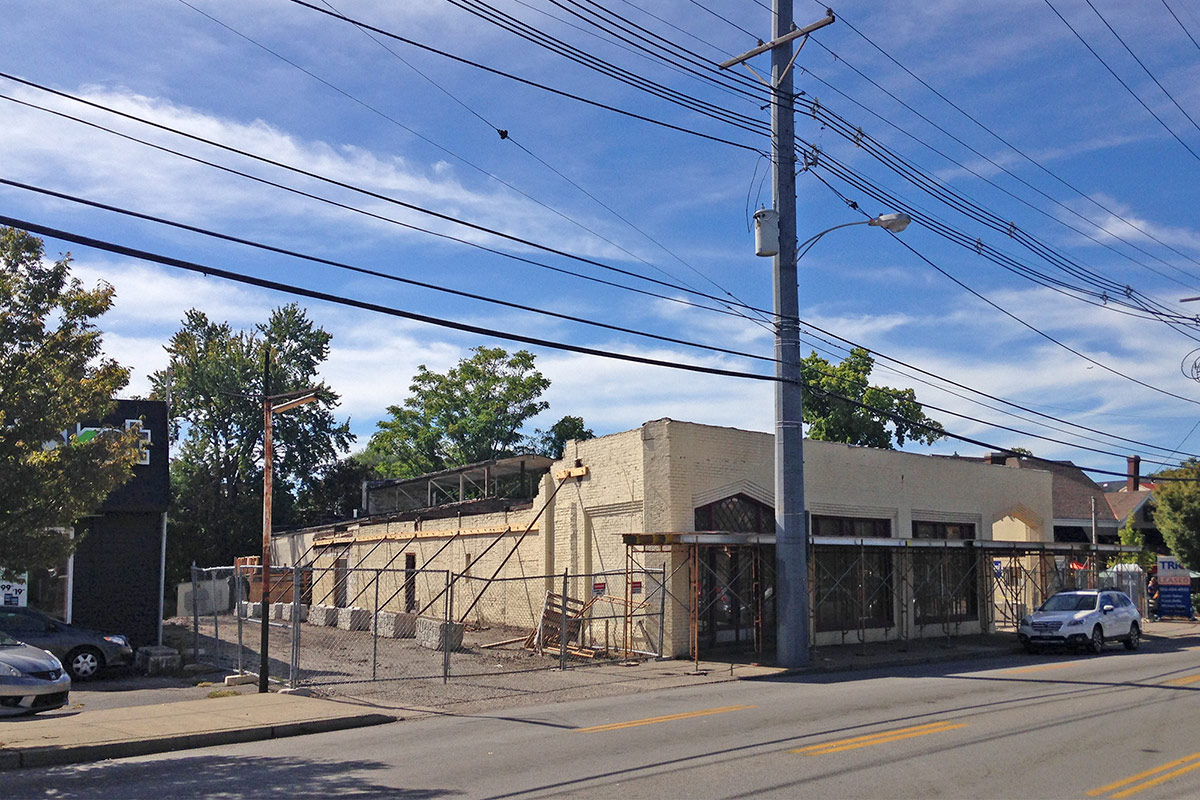 In the early 20th century, a simple one-story brick building at 1064 Bardstown Road was filled with Studebaker cars. You’re probably more familiar with the building as the long-time home of Spindletop Draperies. If you walk by today, the site is a construction zone, with the buildings mid-section torn away to make way for a new building.

After nearly 40 years in the Highlands, Spindletop moved its 25 employees down the hill to the border of Nulu and Phoenix Hill. The drapery retailer now occupies the former home of the Bunton Seed Company at 939 East Jefferson Street. Spindletop co-owner Tyler Payne cited the growing design district taking shape in Nulu as impetus for the move, according to the Courier-Journal. “There’s lots of other design shops on East Market,” he told the newspaper. “We thought we’d fit in real nice down there.”

The nearly 90-year-old Bunton Seed closed in March 2013, according to Business First, when its president, Winfrey Bunton III, retired. Spindletop co-owner Pat Payne purchased the 13,000-square-foot building for $850,000 and invested another $500,000 in its renovation, according to the business newspaper.

Nashville-based real estate investment fund Priam Ventures snapped up the Bardstown Road site for $1.65 million last year, according to Insider Louisville. The one-story building contained 9,000 square feet on a half-acre lot. That report noted that the structure was built in phases, with the brick facade facing the street dating to the 1890s. An steel-frame addition, which was demolished, was built in the 1920s, and another addition with a barrel-arch roof was built in the 1940s.

It’s more likely the front facade was built sometime after 1916—or altered during 1920s expansion. According to an October 1916 edition of The Week in Industry, F.P. Harter’s dealership at that address was one of seven selling cars from the Ford Motor Company. According to development documents, the structure served as an Oldsmobile and Viking dealership in the 1930s. In the ’60s, the address operated as Cornett International Motors.

Original plans for a $3 million adaptive reuse of the building included building a three story structure in the middle of the site, keeping the single-story front untouched. The two additional floors would have housed around 3,000 square feet.

Insider Louisville again reported in June 2015 that the project was being scaled back. The three-story building was scaled back to two stories, resulting in a reduction of about eight feet of height. The one-story addition will have access to a roof deck on the original structure. The renovation is now estimated at $2 million, with additional fit-up by the tenant.

Work on the Spindletop conversion began in mid-August and is now well under way. According to an inspection report dated October 19, a portion of a wall collapsed at the site, halting construction. “Supervisor notified of possible emergency demo,” the report noted. “Need engineer before construction resumes.” The inspector in charge of the project could not be reached for clarification.

Nashville-based Pfeffer Torode Architecture designed the building. Louisville’s Leonard Engineering is serving as the structural engineers. The building, while shortened from three to two stories, appears to have benefited from rigorous design revision, and the design submitted to the city appears well-detailed.

“The adaptive reuse project transforms an historic Studebaker dealership and garage,” the architect’s website reads. “The project honors the original masonry structure and preserves many original features, while complimenting [sic] the historic portion with a streamlined, modern structure above.”

Brick on the front facade will be cleaned and repainted, and existing wood windows will be repaired and kept in place. The new structure will be clad in a zinc panel system with cement fiber board details. On the north side, a patio is planned with several large garage doors that open to the interior space. The street-facing side of the pop-up addition features large expanses of glass with a structural X-brace detail. The second floor opens up to a rooftop terrace overlooking Bardstown Road and its facade features expanses of Ipe wood siding inset within the zinc facade. More Ipe wood is included on the south side, where signage is planned.

On August 31, Insider Louisville’s Caitlin Bowling reported that the space would become HopCat, a beer bar and restaurant planned to open in 2016. The bar would occupy the entire structure’s 12,000 square feet. The original HopCat opened in Grand Rapids, Michigan in 2008 and has since expanded to cities including Detroit, Indianapolis, and Lexington.

“HopCat was envisioned, designed, stocked, and staffed with one mission in mind: To bring you great beer,” its website reads. The bar has been listed “as one of the Top 50 bars in the US by Draft Magazine” and “as the #3 Beer Bar in the world” by Beer Advocate Magazine, among many other accolades.

Their bars are known for their high number of taps—from 100 in East Lansing to 130 in Indy’s Broad Ripple—featuring craft beer. HopCat will also serve wine, have a full bar, and offer food.