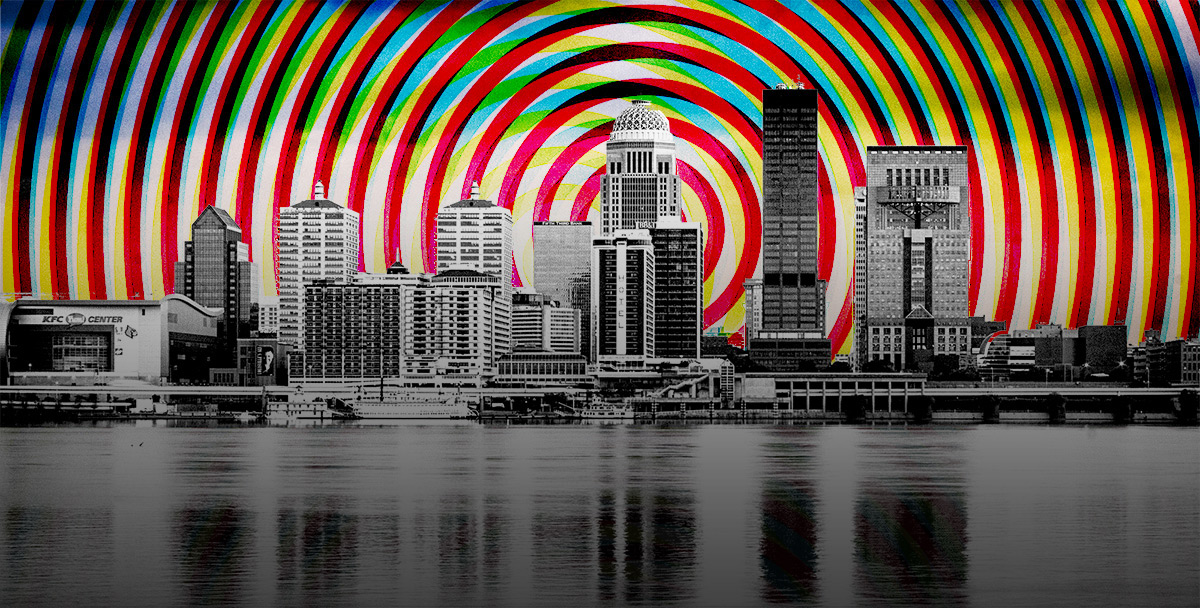 So often we talk about the built landscape of Louisville here on Broken Sidewalk, but there’s another invisible layer of the city’s infrastructure that’s buzzing all around us—wireless telecommunications. (What such signals might look like has been speculated upon here and here.) Modern urban infrastructure goes way beyond sewers, streets, and power lines. In our data-driven, connected world, access to the internet—a lot of internet—is becoming the norm rather than a luxury.

One of the most coveted such layers of infrastructure is Google Fiber, an ultra-fast internet and television service still only available in three cities. Today, Mayor Greg Fischer unveiled that Louisville is the latest city in the running for the program.

Just how fast is Fiber? According to the city:

Since Google Fiber was unveiled in 2012, nine cities have been approved, with three—Kansas City, Austin, and Provo, Utah—already up and running. Atlanta, Charlotte, Nashville, Raleigh-Durham, Salt Lake City, and San Antonio are in the process of rolling out their own networks. Louisville is in a group of “potential fiber cities” that includes a bevy of West Coast cities and Phoenix, Arizona.

Thursday afternoon, the mayor made the announcement that Louisville is working with Google on bringing Fiber to the city, which would be a major boon for the mayor’s efforts to make the city a national tech hub. He cited the technology’s benefits for the economy and spurring innovation.

Google Fiber isn’t here just yet, however. City officials are now “working with Google Fiber to explore building a new superfast broadband network in the city,” the press release stated. “We look forward to working side by side with Louisville in the coming months to explore if we can bring Google Fiber to the city,” Jill Szuchmacher, director of expansion for Google Fiber, said in a statement. But to be on the list of potential cities is a major advantage over dozens of others waiting on the sidelines.

For now, Metro Louisville and Google will look into the feasibility of building a gigabit fiber network in Louisville. According to the city:

Google will begin compiling a detailed study of local factors that might affect construction plans. Simultaneously, Fischer and city leaders will begin meetings with Google to discuss what it would take to plan and prepare the city for a fiber project of this scale.

While those details are ironed out, Metro Louisville is moving ahead with another high-tech telecommunications program in the Russell neighborhood. On Tuesday, the mayor revealed that an area around the planned West Louisville FoodPort is in the midst of a year-long pilot project to bring public wifi to city residents. The first phase, already up and running, includes three wifi hotspots in the neighborhood.

And while the city just made the program public, local residents have already been using the new service. “We’ve rolled out something small, but we’ve already served a couple hundred people in the last three weeks,” Ted Smith, Metro Louisville’s chief of Urban Innovation, told Broken Sidewalk. The three hotspot locations are:

Each hotspot can broadcast a signal for 200 feet around, which doesn’t seem like much on a city scale, but Smith explained that this is only the beginning. “Phase one is a relatively small footprint,” he said. “We knew the Google news was coming out. We got out with a smaller footprint than was maybe press-conference worthy.”

But even with a small rollout of three hotspots, Smith is excited about what this means for the city. “The second phase follows a mesh network type of architecture,” Smith continued. Such mesh networks are at the cutting edge right now, where a signal from a hotspot is boosted and relayed through high-tech “repeater-transmitters” to broaden its catchment area. In the next few weeks, the city will be expanding from the three hotspots to fill in the network along West Market Street between 25th and 29th streets.

There’s much more potential from this kind of wifi network than just access to email and Broken Sidewalk. Smith pointed to the country’s oldest mesh wifi network in Red Hook, New Jersey. According to a New York Times profile:

Unlike the Internet available at work or at home, which typically arrives through a wire and follows a carefully plotted path from Internet provider to user, a mesh network is improvised — and remarkably resilient.

Because the devices speak to one another, they are more than a series of “hot spots” with Internet access; the mesh remains a network whether or not it is connected to the Internet. And that independence is its main attraction.

Smith said the community supported initiative in New Jersey was the only telecommunications network active during Hurricane Sandy several years ago. Since the storm, the nonprofit Red Hook Initiative and others have grown it even more.

In Louisville, the first-year pilot was funded with an $11,000 grant from Bloomberg Philanthropies administered through Smith’s department, but after the money runs out next August, Smith hopes a similar community-run nonprofit can pick up the reigns. “I’m currently actively looking for anybody brave enough to step up and run a community network,” Smith said, adding that an ideal candidate would operate from Russell or surrounding neighborhoods. He said the main challenge is finding an operator, not funding the network, “I believe funding for the long haul is readily available.” When one is found, the city will turn over control within the next six months to a year.

It remains to be seen how the public uses the new service. “We don’t have a segmented goal structure. We have an overall use goal,” Smith said. “We do anticipate it will be a mixture of visitors [on the sidewalk] and businesses and some residents [at home]. I’m looking to get as much mileage out of the network as we can.”

Smith said the city is looking at a variety of technologies to grow a larger network, including wifi-enabled Bigbelly trash compacting stations like those placed around Downtown Louisville. He cited a pilot project in New York City using the technology. “I’m really looking for a modern, redundant meshed network when we’re all done here,” he said.

In the end, Smith said it’s about empowering the local community and providing new opportunities to grow the economy. He pointed to the hotspot at Dad’s Muffler as an example of the change technology is bringing to the neighborhood. The repair shop has never had internet or a website, Smith said, but now there’s a public wifi hotspot on their roof.

Smith added that student-run Beech Technologies, which grew out of the Beecher Terrace Homes and now headquartered at Code Louisville’s East Market Street offices, is building a website for the muffler shop in hopes of growing its business.