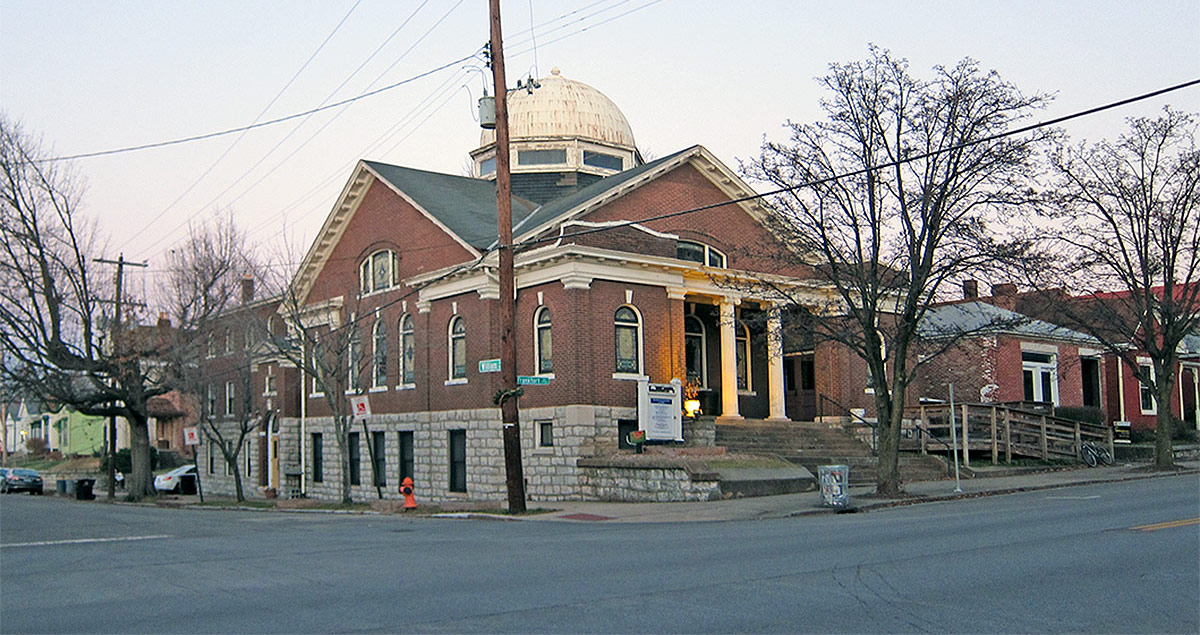 The James Lees Memorial Presbyterian Church at 1741 Frankfort Avenue was built in 1915 on a prominent corner parcel on the corner of Frankfort Avenue and William Street in the Clifton neighborhood. The church has been a neighborhood institution for well over a century, but disbanded earlier this year. Now, a plan for the structure’s reuse  has emerged and a public meeting is scheduled for Tuesday (details below).

Back on Reservoir Avenue

But the congregation traces its roots back 22 years earlier to a site around the corner on Mellwood Avenue, according to The History of James Lees Presbyterian Church, 1893–1938. Back then, Mellwood was known as Reservoir Avenue, and the church formed initially in the home of Mr. Hugh Stafford, 1217 Reservoir Avenue, later moving to a storefront down the street at 1320 Reservoir Avenue. This was at a time when not just street names were different—the entire built landscape was different as well, dominated by the hulking Mellwood Distillery at the foot of Frankfort.

The group quickly formed a Building Committee to plan a new structure for what was then the Reservoir Avenue Mission, and with the help of a Mrs. Susanna Preston Walker Lees of New York City, was able to build its first home, which opened on September 25, 1898 on the site of today’s Lees Memorial.

Mrs. Susan P. Lees was a benefactor to many institutions in and around Kentucky, mostly affiliated with the Presbyterian Church. Born in Frankfort, she later moved to Chicago and then New York, according to a 1902 obituary in the New York Times, after marrying into great wealth. She has also given substantial gifts to what was once called Lees College in Hazard, Kentucky; Lees-McRae College in Banner Elk, North Carolina; and Washington & Lee University in Lexington, Virginia—all in the Appalachian region.

Less than two months after opening their new structure in 1898—a wooden building with a corner steeple predating today’s church—the group was formally established at the James Lees Memorial Presbyterian Church under the leadership of Reverend Henry H. Sweets. By 1910, the church was growing and needed larger quarters. In 1913, the congregation numbered 392 and leaders voted to build a new church at a cost of $20,000. Today’s James Lees Memorial Presbyterian Church at the corner of Frankfort Avenue and William Avenue placed its cornerstone in 1914 and opened on September 27, 1915.

James Lees Memorial’s congregation dwindled in the 21st century. It held its last service in early December 2014 and the church was dissolved in January 2015, according to the Courier-Journal‘s Martha Elson. The church had been known for its social justice initiatives, and as Elson reported, “They have included offering an English as a second language program, provided clothing and other extra help to Hispanic immigrants and others in need, supporting United Crescent Hill Ministries and participating in a ‘Campaign for a Safe, Welcoming and Diverse Clifton’ that sought to prevent domestic violence and bullying.”

In recent years, a group called 1741: A Collaboratory for Social Innovation operated in the church. According to its Facebook page, the collaboratory was a “community of people and organizations who have come together to create a dynamic workplace and environment for social change.” Among the groups operating in the collaboratory were Athena’s Sisters, a group for military and veteran women, and the Looking for Lilith Theater Company.

Now, the building’s next chapter is unfolding with a proposed rezoning from residential to commercial to allow conversion into offices for Advance Ready Mix Concrete. According to the Clifton Community Council, a public meeting is scheduled for Tuesday, September 15th at 5:30p.m. at United Crescent Hill Ministries, 150 State Street. Details about the building’s reuse will be presented and comments and suggestions heard from the community. (If you go, send us a report to tips@brokensidewalk.com.)

According to the council, the property has been sold to the Abel family—Judy Abel, her son Bill Able, Jr., and daughter Camilla (Abel) Schroeder—which “lived in the Clifton neighborhood and were members of the James Lees Memorial Presbyterian Church.” The building would house the corporate headquarters of the concrete mixing company where Schroder serves as president. Offices would house 12 to 16 employees in the structure’s 7,600 square feet on upper floors (there’s an additional 5,000 square feet in the basement). Bill Abel Jr. is the president of Abel Construction, which would handle the renovations.

The company’s current offices are located at 161 North Shelby Street on the far north side of Butchertown with plants located throughout the Louisville area.

The building sits within the Clifton Preservation District and the Clifton National Register District, giving its architectural heritage additional protections and stipulating guidelines for changes.

[Editor’s Note: Special thanks to Jill Morgan for bringing the church to our attention last year and helping with researching its history.]