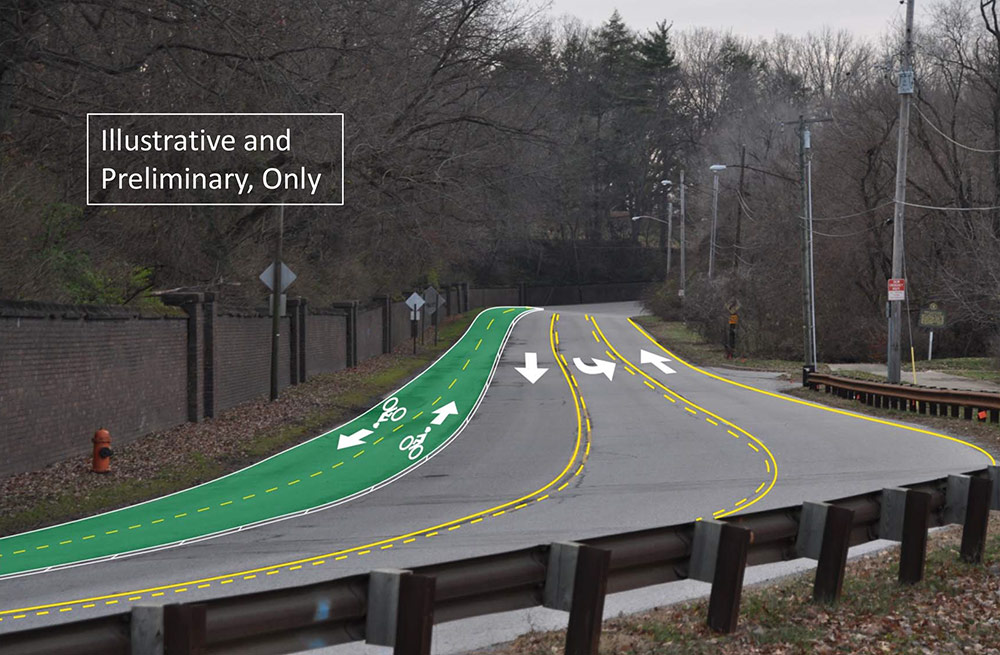 Lexington Road is due for a road diet that could bring Louisville’s first “cycletrack” between Baxter Avenue and Grinstead Drive. Plans under consideration now show two scenarios—one with a traditional bike lane on each side of the road surface and another with a buffered, two way cycletrack on one side. Both schemes reduce Lexington Road to two travel lanes with a center turning lane, an approach that has become standard fare in Louisville street redesigns lately.

Be sure to check out these ten new examples of cycletracks from across the country that People for Bikes just named the best of 2014.

And while cities from coast to coast already have these types of bike lanes and are reaping the benefits, Louisville is in talks to get its very first, on a stretch of road that makes a lot of sense for this type of infrastructure. But it’s not a sure thing and we’re going to need your help to get it done. (Jump over to Metro Louisville’s public comment form and drop them a note.)

According to Metro Louisville:

The Lexington Road Corridor Transportation Plan (LRCTP) is a planning study for the corridor from Baxter Avenue/Jefferson Street to Grinstead Drive, through Irish Hill neighborhood, the Breslin Park area, and along the north/back side of Cave Hill Cemetery, south of I-64. The purpose of the LRCTP is to assess the current safety and access issues experienced by residents and businesses. The study will consider the potential impact of a series of development proposals and initiatives that will require multi-modal considerations to protect the quality of life, mobility options, and economic development of the corridor.

Essentially, the project will convert the current four-lane roadway configuration into a two lane road with a center turning lane. The extra space left over will go toward the cycletrack on the south side of the street. Conflict zones—areas where motorists and cyclists cross paths—would be painted green for added safety and visibility. A few missing segments of sidewalks would be added as well. The end result is a better street for all users—cyclists get a safe path, pedestrians get better sidewalks, and motorists get safer traffic flow. Take a look below at each segment broken out in a more detailed plan.

This once forgotten stretch of Lexington Road has long been the domain of speeding cars, but with proposed apartments at Distillery Commons, some 300 apartments under construction across the street (more on that soon), and new $200 million plans to redo a triangular plot at the intersection of Lexington and Grinstead with two towers, the road is about to become a vital pedestrian and biking link connecting the near suburbs with the city’s core.

The other options under consideration are to take no action, which would just be a shame, and to build normal bike lanes on each side of the street, which would just keep Louisville in the status quo of bike infrastructure innovation. We fully support the cycletrack option as part of this project.

But first, you need to write in to Metro Louisville and tell them you support it, too. We can’t emphasize this enough: Make a public comment using this online form right now. And tell your friends to do the same.

The next public meeting is scheduled for January 20, 2015 at 5:30p.m. at the Girl Scouts of Kentuckiana, 2115 Lexington Road. Officials will present their final designs to the public and gather additional input. Try walking or cycling there to get some ideas on how to improve the road first hand. Or take a look at the existing conditions photos we took in December below.