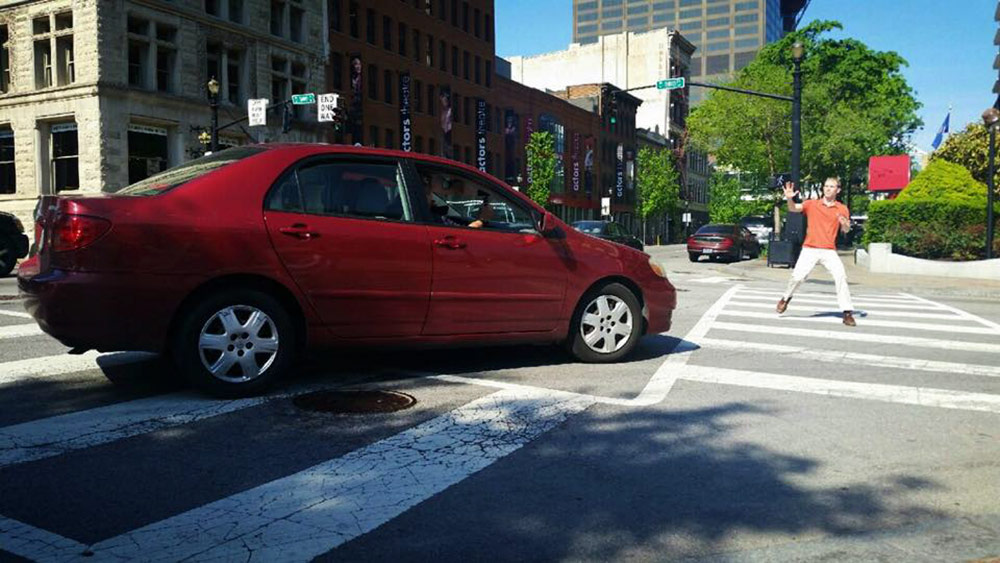 Navigating streets in 21st century America can be downright scary for everyone involved—pedestrians, cyclists, and motorists. And it’s too often deadly. We’ve all felt it before, that sense of dread crossing the street at one point or another. I cringe every time I see a lady break into a near sprint to cross the street on foot, even when the pedestrian light is shining. It’s difficult enough to get around the core city, a place historically set up for pedestrians, and near impossible in the far-flung suburbs connected by arterials designed for car speed and not much else.

City leaders today are looking to remedy the dangers of navigating our streets, including here in Louisville. Our city is in the midst of a three-year pedestrian safety campaign called “Look Alive Louisville,” that calls for education and enforcement to curb traffic violence and reduce incidence of pedestrian deaths.

“We want to add to the many things that Louisville is proud of, being recognized among the safest cities in the nation for pedestrians,” Louisville Mayor Greg Fischer said in a statement this spring. He was referring to the on average 16 pedestrian deaths on Louisville streets each year. Metro Louisville Public Works’ Bike Louisville and the Louisville Metro Police Department (LMPD) have joined forces to usher in a new era of safe streets.

But can Louisville’s campaign make lasting marks on street safety? Does the three-year Look Alive effort go far enough? Let’s dig into the forces that led to our current predicament, explore what’s happening on the streets of cities across the country and at home, and look in depth at how this latest campaign hopes to bring safer streets to Louisville.

We’ll be covering street safety, piece by piece, in a series rolling out all this week.

But first, meet Louie the Looker

In the face of a rising pedestrian injury and fatality rate, and an above-national-average incidence of pedestrian death, it was welcome news in April 2014 when Louisville landed a $307,000 grant from the National Highway Traffic Safety Administration (NHTSA) to help with education and enforcement to reduce pedestrian fatalities. New York City and Philadelphia were also awarded grants. That funding was augmented by a  $120,000 grant from the Kentucky Transportation Cabinet in July 2014 for a street safety education campaign.

Fischer also announced he had signed on to the year-long Mayors’ Challenge from the U.S. Department of Transportation. I covered that program earlier this year at The Architect’s Newspaper.

“Because of our crash rate being as high as it is, NHTSA put us into a group of cities called ‘pedestrian focus cities,’” Rolf Eisinger, bike and pedestrian program manager at Bike Louisville, told Broken Sidewalk. “Part of the reason why we were awarded funding is that we had a document similar to a pedestrian safety action plan.That helped us get on the map for getting these grants.”

That report, Understanding Pedestrian Crashes in Louisville, Kentucky, 2006–2010, takes a data-driven look at exactly what is happening on our streets. It breaks down crash data, looking at what reported actions contributed to crashes, where collisions occurred, and who was most likely to be hit.

Among its findings, the report said that the “majority of crashes occur on local streets while the majority of fatalities occur on state streets,” that “there is a clear concentration [of crashes] within the Central Business District (CBD) and along principal arterials with high volumes of motor vehicles,” and that “There is an even split between crashes occurring in intersections verse non‐intersections.”

“We’re trying to figure out, based on the data, what could we do to target some of those factors for crashes. What’s leading to people getting hit on our roadways?” Eisinger said.

(There’s a lot of great data in the document’s 35 pages, and you can read through it yourself here. We’ll dig into more of it in another segment.)

Look Alive Louisville even has its own an anthropomorphic fleur-de-lis pedestrian dubbed “Louie the Looker” after one of Mayor Greg Fischer’s famed social media contests. Advertising for the campaign features the walking fleur-de-lis and cautions drivers to yield to pedestrians.

The funds associated with the Look Alive Louisville campaign have a few strings attached. “The grant has specific criteria,” Eisinger said. “It’s only for education and enforcement. I can’t use these funds to rebuild or put in new sidewalks.” Focusing on the two E’s, he said the city is taking a three-pronged approach:

While the first two educational components have largely flown under the radar of local media, the enforcement campaign is causing some controversy, specifically as it cracks down on pedestrians themselves. We’ll take a closer look at what it hopes to achieve and why it’s sparking debate this week.

This pedestrian safety campaign is great news for Louisville, especially since walking is becoming more popular than ever. The city is promoting active lifestyles to combat the city’s notoriously unhealthy reputation. Hundreds of new residents are returning to the city’s core and taking up a new walkable way of living in the city.

And it’s needed more than ever.