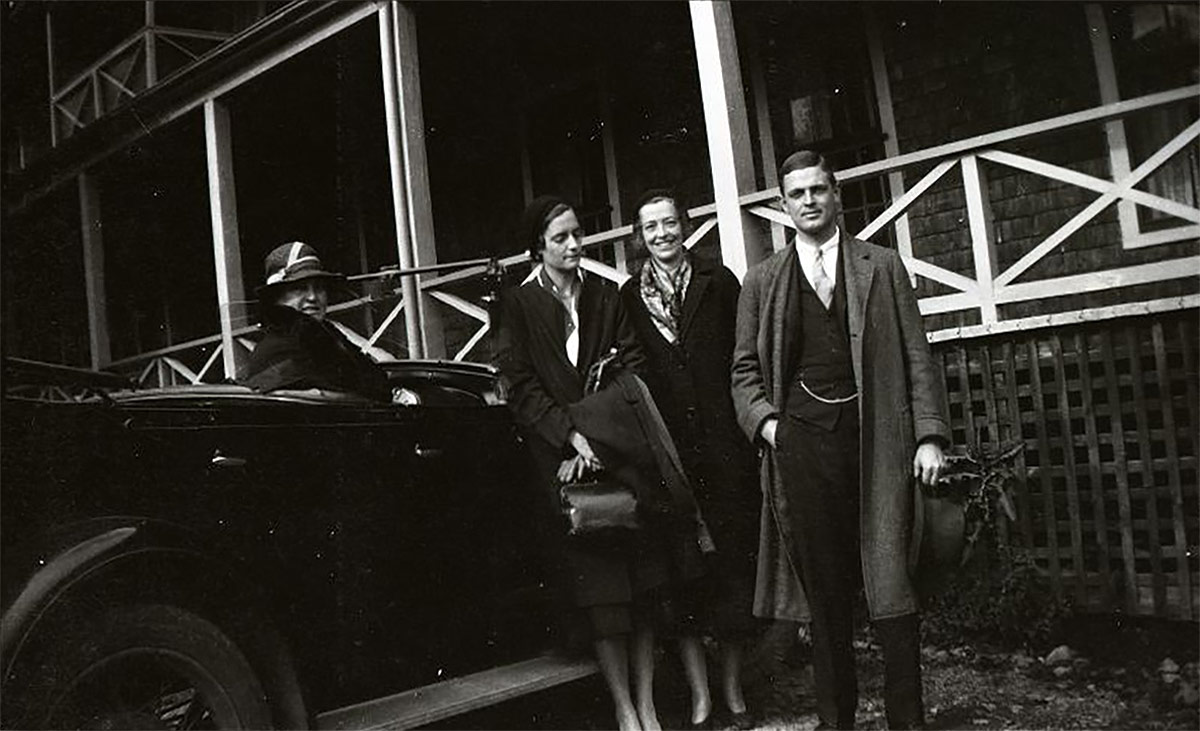 Born in Springfield, Illinois in 1902, Louise Leland was the daughter of Jerome and Gertrude Akin Leland. Jerome was a descendant of the Lelands connected with some of the country’s earliest examples of fine hotels (examples include: Metropolitan Hotel and Sturtevant House, New York City; Grand Union Hotel, Saratoga Springs; Occidental Hotel, San Francisco and Leland Hotel, Springfield). He was himself employed in both farming and real estate. Gertrude was the daughter of ex-Attorney General Akin. The couple was divorced by 1909; Jerome stayed in Springfield, while Gertrude moved north to Chicago with their children, Edward and Louise. Gertrude worked as a social worker and she later traveled abroad in March of 1918 to both France and England in order to aid in the war effort, specifically YMCA’s Canteen Service.

Louise was educated at Chicago Latin School for Girls, as well as Cottage School in Riverside, Illinois and Kemper Hall in Kenosha, Wisconsin. In 1919 she enrolled at Smith College in Northampton, Massachusetts. While at Smith she experienced the death of both her mother and her brother (more on her brother’s death can be found here). Despite these heartbreaks, Louise maintained decent grades and an active schedule while at Smith. She was involved in numerous activities, perhaps most regularly with the All-Smith Baseball Team, of which she captained all four years.

After Smith, Louise attended Cambridge School of Architecture & Landscape Architecture (today’s Harvard Graduate School of Design). She graduated in 1933 and one year later sat for the board exams required of all would-be architects. It is worth noting that Louise was the only Kentucky candidate to sit for the 1934 exams and the first (and only) woman to become registered in Kentucky from 1938 (the date of her successful test completion) until 1975.

So what brought Louise to Kentucky? The same things that bring many of us (or at least me!) here—love and work. While at Cambridge Louise met Anne Bruce Haldeman and the two moved to Kentucky in order to live and work together. You can read more about their work in a post I wrote earlier this year.

The Filson is excited to have numerous documents that detail the life and work of both Anne Bruce and Louise. A few I want to example today include Louise’s thesis project from Cambridge, a project titled “A House on a Downhill Lot,” drawn in June of 1933.

With these drawings is a letter and plat map (both undated, unfortunately) from her father, Jerome. It appears that Louise’s thesis, which depicts a Tudor-styled home, was designed and drawn specifically for a parcel of land within her family’s Leland Knolls Addition (a neighborhood that still exists today). This information is revealed through Jerome’s letter to Louise:

…I am sending another old plat that you can work over to your hearts content. […]  If you want to figure something out take the North-West Corner where I have penciled in road starting in West of bridge in Maple St. and coming out later on the road west of the farm.  All streets should be called roads and houses should face in to protect lots already platted on the hill of which I am enclosing plat.

It is unknown whether or not this house was ever built but it does appear that “the farm” Jerome mentions is the same farm on which he spent much of his childhood. After Jerome shares with Louise information about the land, he goes on to offer his apologies for missing a tea hosted at her school. He says “Leaving for Chicago tonight for inspection at the Presbyterian Hospital but will be home again Thursday night. Am feeling fine. […] I hope that you are well, happy and not working too hard.” Jerome died in 1937, likely about five years after his letter.

Louise Leland was the first—and only—woman to become registered in Kentucky from 1938 until 1975.

Also within The Filson’s collections are the drawings, photographs, and slides for the home of Anne Bruce and Louise. The couple called their home “Puye.” Their residence, located in Glenview, Kentucky still stands today. One particular drawing shows a “proposed kitchen” that matches almost perfectly to a photograph of their built and furnished kitchen. Anne Bruce and Louise collaborated on many projects, including a beach cottage called “Sand Piper,” which features a kitchen design quite similar to their own. These early sketches combined with finished drawings and photographs offer wonderful insight into the design and creative processes of architecture.

Drawings and slides document the projects mentioned above, as well as many others, and exist for researchers here at The Filson. Though most slides are project-related, one fantastic slide captures both Anne Bruce and Louise, likely in the late 1920s, posed on the yacht Medora along with Captain Seward Prosser at Woods Hole (top image). Only a handful of other slides capture either Louise or Anne Bruce and they are usually in profile, engaged in work and rarely the focal point of the image.

Unfortunately, just like images of Louise, personal papers and correspondence are limited and nearly non-existent here at The Filson. Yet thanks to online resources such as ancestry.com and the archivists at Smith, Harvard, and the American Institute of Architects (AIA), I am still cobbling together pieces of Louise.

Stay tuned in 2016 for more updates on Louise, as well as information about an edit-a-thon in which she—and other female architects—will find their rightful place within Wikipedia. More on edit-a-thons on this topic can be read here and here.

[Editor’s Note: If you have more information on Louise, her family or Anne Bruce, please don’t hesitate to get in touch with Johna at jpicco@filsonhistorical.org or 502.635.5083.This article was cross-posted from the Filson Historical Society Blog. Top image courtesy the Filson.]