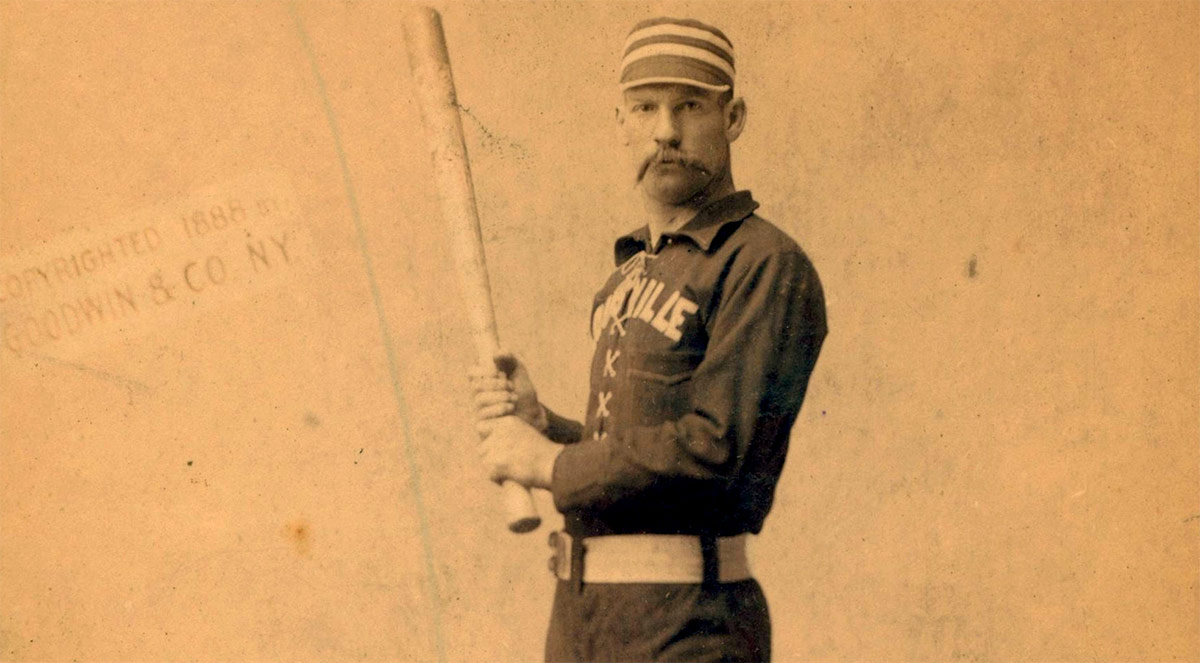 [Editor’s Note: Last week we covered the history of Hillerich & Bradsby’s original Smoketown headquarters, now a surface level parking lot and soon to be something much better. In that report, we quoted the company’s official history of how the Louisville Slugger was born, and it’s quite a story. Local architect, historian, and regular Broken Sidewalk contributor Steve Wiser shared this article he wrote for a recent Louisville Historical League newsletter that sheds some light on how Louisville’s famous baseball bat might have actually come into existence.]

Colonel Sanders definitely started Kentucky Fried Chicken; George Garvin Brown definitely began bottling bourbon in bottles; and David Jones and Wendell Cherry definitely founded Humana. There is no question how these legendary local businesses originated. Not so with the Louisville Slugger baseball bat. As noted on the Louisville Slugger Museum & Factory’s website, “There is debate over the origins of the company’s first bat… according to legend.”  What does this mean, “according to legend”?

In 1884, as the legend goes, John Andrew ‘Bud’ Hillerich approached professional baseball player Louis Rogers ‘Pete’ Browning after a game in which Browning broke his favorite bat, and said he could make Browning a bat that wouldn’t break. Browning got three hits with Bud’s handmade bat in the next game, and the Louisville Slugger legend was born. Or was it?

Bud Hillerich was the son of Johann Friederich Hillerich (or, as Americanized: John Fred Hillerich, or just ‘JF’ for short). JF owned a woodworking company that manufactured bed posts, roller skids, tenpins, and butter churns. While his son Bud was a baseball fan, JF was not. Thus, it is easy to understand how Bud is credited with creating the bat “according to legend.”

However, while conducting research on another topic, I came across JF’s obituary in the Louisville Times, dated January 17, 1924. The elder Hillerich’s death notice differs from the company’s legend as to the origin.

In the obituary, it is stated that it was Pete Browning who first came to Hillerich’s woodworking company one day and specifically asked for JF to make some bats, which he did. A few weeks later, Browning returned, and said, “that bat is a slugger.” and ordered more of them. And, per the obituary, Louisville Slugger was born.

Which story is correct? Bud’s version of him asking Browning to make the bat or his father’s in which Browning asked JF to make the bat? Would an obituary, written by the Hillerich family, contact inaccurate information? Or, would a popular legend not be based on fact?

Further internet research turned up another fascinating article on this topic, which was written by James Applegate in the St. Clair County (Illinois) Historical Society newsletter of September 2005. Applegate is the grand-nephew of Frank Bradsby, whose name is now associated with the bat company Hillerich & Bradsby. Bradsby was born in Lebanon, Illinois, which is in St. Clair County.

Applegate’s description is very similar to JF’s obituary. Per Applegate’s article, Browning was walking down the street and “seeing Hillerich’s woodworking shop, went in, and requested [the] building of a bat.” Applegate’s version does note that JF was not a baseball enthusiast and only through his son’s Bud’s prodding did he make the bat for Browning.

While there may be discrepancy in whether Bud went to Browning first or Browning went to JF first, if it wasn’t for Bud’s insistence, Louisville Slugger would not be hitting home runs today.

Of note: Bud’s obituary was also checked, but, it did not mention the origins of Louisville Slugger as had his father’s. Researching history can be challenging in determining the accurate facts. What isn’t disputed are JF’s and Bud’s woodworking skills that have made Louisville Slugger an iconic local business for over 131 years.