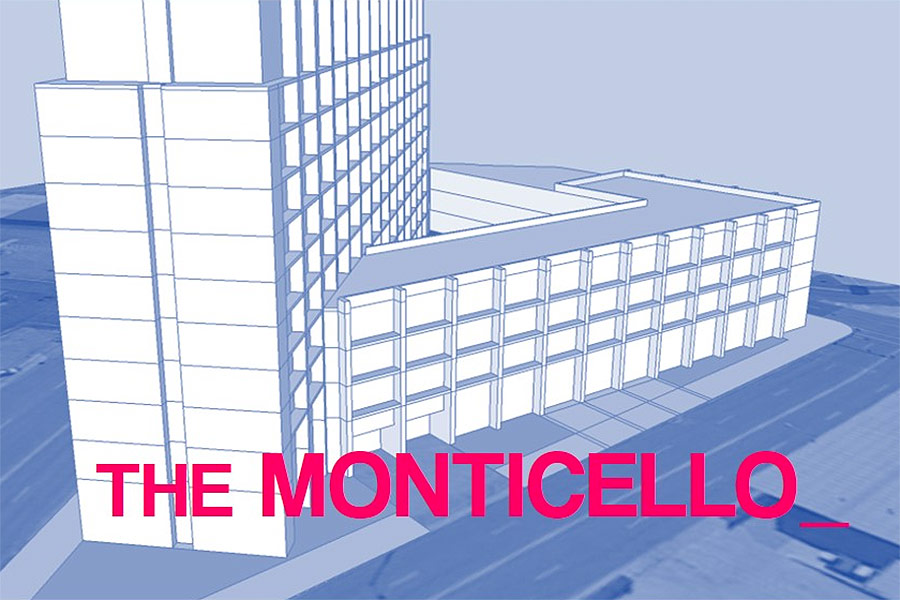 [Editor’s Note: Urban planner Nick Seivers has re-imagined an oddly shaped and underutilized block into a monumental design that could knit together neighborhoods. He calls the proposal the Monticello. View more of Nick’s proposals on his blog, Urban Composition.]

On the triangular block where Baxter Avenue, Lexington Road, Jefferson Street, Liberty Street, and Chestnut Street come together, I propose a contemporary mixed use tower to define the intersection between Downtown, Nulu, Phoenix Hill, and the eastern neighborhoods leading to the Highlands.

This is one of those quickly recognizable lots around town. I’m sure that I am not the only one who thinks to himself: “I wish that they would do something with that lot.” Here’s one suggestion.

I suggest this contemporary, elegant, angular, international form for this site. This is a form that could include anything from a discount retailer and multi-modal transit hub to performance venues, coffee houses, sushi restaurants, and art galleries on the first and second levels, with residential units above. New storefronts on Baxter Avenue activate the block between Nulu and the Highlands and take advantage of the high visibility and traffic volumes at this location.

The interior space (purple) between the 11-story (approximately 150 foot tall) tower on Baxter Avenue and the V-shaped four-story section on the Chestnut and Liberty street frontages, caps a parking structure providing an outdoor space for residents and special events. The parking structure and main entry to the residences is off of the relatively quiet Chestnut Street. The Liberty Street frontage is shorter than the other two elevations and visibility may not be attractive for some high-intensity type uses. I imagine that the right occupant here may be a gym or a catering company.

The walls of the Monticello facing the Highlands would be adorned with a large brightly painted mural (pink) greeting motorists and others from the eastern neighborhoods as they pass under the elevated railroad on their way Downtown, the Medical Center, or Nulu. This building not only occupies this lot at the right-of-way lines, it activates it and redefines the neighborhoods it sits between.

Street trees and outdoor dining are not shown in these illustrations. Undefined areas are shown as a green. The small cube that contains equipment for one of the local utility companies remains unchanged in this concept. The focus here is on adapting the odd shape of the lot into comfortable and rich urban experience and juxtaposing height and expanses of glass to an area with small metal warehouses, century-old brick homes and corner stores, and complex street intersections.

The name Monticello is a reference to Thomas Jefferson whose influence locally beyond Jefferson Street and Jefferson County is described more proficiently by historians. Jefferson interpreted Classical architecture at his home, Monticello, in Virginia. Historical Jefferson may not recognize the architectural inspiration for this Urban Composition or be keen to its location within an urbanized area, but I feel that if Jefferson were alive and as traveled today as he was in his time, I think that he would appreciate the International Style so prevalent in our nation’s capital and around the globe.

A place called Gap of the Ridge outside of Monticello, Kentucky (pronounced locally as Monte-cell-o) is where my father was from. I don’t know that C. Allen Seivers was a big fan of the architectural styles in fashion from when he was invited to travel the globe by the U.S. Army until he was about the age I am now, but he was generally encouraging of my crazy ideas. So in my clumsy way, this is my dedication to my father.