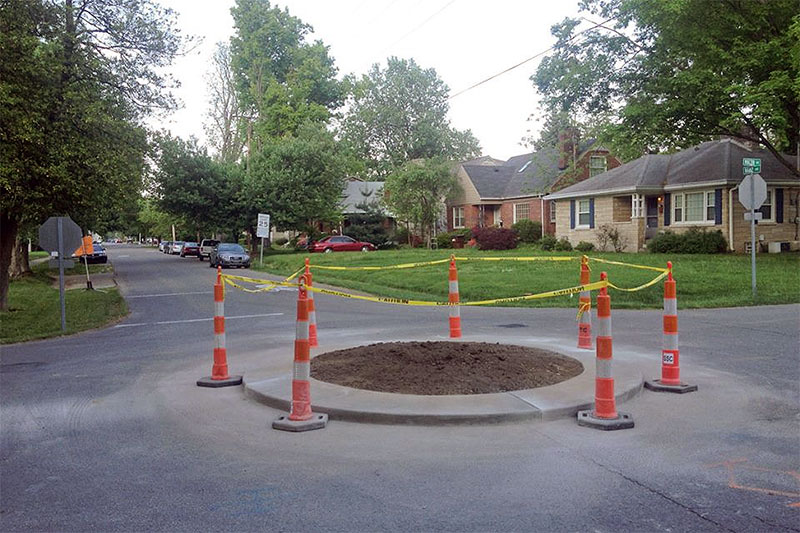 St. Matthews is the testing ground for a new traffic calming device—a neighborhood roundabout. Two tiny traffic circles have been cut out of Nanz Avenue, at Macon Avenue and Iola Road, and landscaping will soon be installed. The technique isn’t new, but it has been shown to be effective; cities around the country from Portland, Ore., Seattle, and St. Louis, have been using this method for years. The idea is that as cars approach an intersection, motorists will be forced to slow down and pay more attention to navigate around the barrier, making the street safer for everyone.

“Traffic circles, widely used in many communities but new to Louisville, have been shown to be effective devices for controlling neighborhood traffic and improving the safety of residential streets,” District 9 Metro Councilperson Bill Hollander wrote on his blog. “The traffic circles on Nanz are also designed to attract bicycle traffic away from Willis Avenue, creating a “Neighborway” on Nanz for bicycle traffic. The project also includes sidewalk improvements.”

As we’ve previously covered on Broken Sidewalk, Neighborways is Bike Louisville’s version of a bike boulevard system, a network of “low-volume streets that have been optimized for bicycle travel through pavement markings, signage, traffic calming and intersection crossing treatments,” according to Bike Louisville.

The so-called “Nanz Neighborway” will connect the albeit-less-than-idea bike lane on Westport Road with a shared-use path at Seneca Park. Expect to see sharrows installed on the orange path to the left.

The cost of the two traffic circles and sidewalk improvements totaled $22,000, including $15,500 in District 9 Community Infrastructure Funds. The City of St. Matthews will maintain the landscaping in the two circles and Metro Louisville will invest in new signage and markings in the future. Eventually, stop signs at the intersection will be replaced with yield signs.

[Top image: A roundabout under construction at the intersection of Nanz and Macon avenues. Courtesy John Paul.]