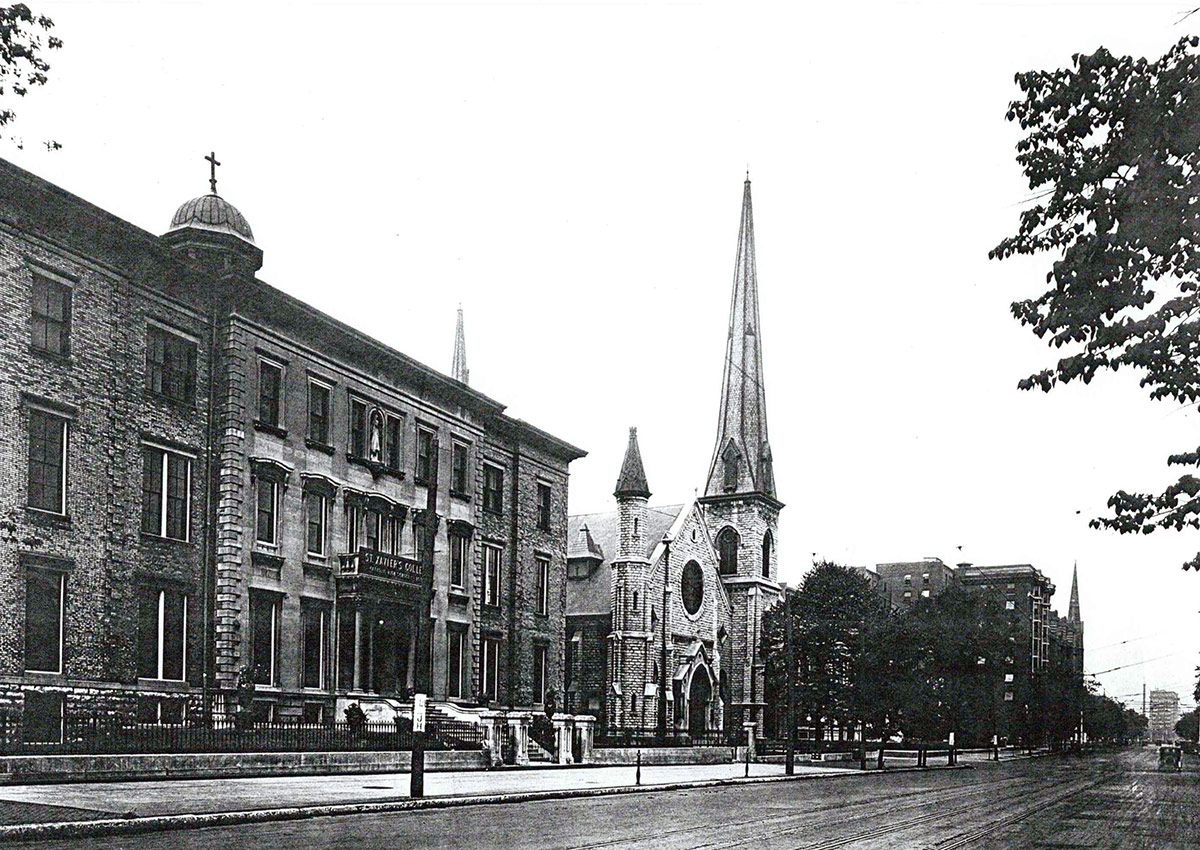 [Editor’s Note: This article was originally written in September 24, 2000 and revised in November 2015 specially for this Broken Sidewalk publication. Steve Wiser is a graduate of St. Xavier High School.]

In two Louisville-area parks sit small remnants of our community’s past that most thought had been lost forever.

Nestled among the trees at a side entrance into Cherokee Park, two stone gateposts look like they’ve been there forever. At the Alta nature trail head (Cherokee Road and Alta Avenue intersection) in Cherokee Park, those posts have a much longer history that predates the Olmsted masterpiece by decades.

Both of these garden follies are from stand the original gate posts columns from the old St. Xavier High School once located on Broadway between First and Second streets. These four columns have a long and distinguished heritage.

The old St. Xavier High School was originally the Newcomb mansion. Built in 1859 at 118 West Broadway, this residence was designed by the legendary Louisville architect Henry Whitestone (1819–1893). Whitestone was known for his Italianate Renaissance designs. Several of his buildings still survive today, including the old L&N Railroad building (131 West Main Street, now the Whiskey Row Lofts) and the Tompkins-Buchanan House (851 South Fourth Street, which is incorporated within another building at Spalding University.) Whitestone also designed the Landward building (formerly known as the Stuart Robinson residence at Fourth and Magnolia) and the Peterson-Dumesnil House at 301 South Peterson Avenue is attributed to him as well.

The mansion’s original owner was Horatio Newcomb (1809–1874). Mr. Newcomb headed Newcomb, Buchanan & Company, a whiskey distillery, and served as president of the L&N Railroad, succeeding James Guthrie. He also was an organizer of the former Louisville Board of Trade (whose building was also designed by Whitestone).

Between 1887 and 1891, the Louisville Female Seminary occupied the mansion prior to the Xaverian Brothers obtaining it in 1891. (St. Xavier was previously located where the Louisville Palace Theater now resides.)

The Brothers altered the mansion by removing the classical stone facade and moving it toward Broadway, expanding the floor plan outwards. Wing additions were also built in brick and a third floor added to match the old house. But, the stone gate pillars remained where Whitestone placed them.

St. Xavier High School relocated to its present campus at 1609 Poplar Level Road in 1961. The old building was demolished and the present Louisville Hotel (formerly a Holiday Inn) was constructed.

Some of the building debris found its way to the City Public Works facility on Logan Street at Breckinridge Street (itself demolished in 2014). Here, William Hefferman, a forester with Metro Parks, salvaged the pillars for use in the Louisville park system.

In addition to the gateposts, two large decorative vases that also stood in front of the Newcomb mansion / old St. X were also saved. They found a new home with Robert & Mary Adelberg, who donated them back to St X in 2003. The vases now sit on the campus, at the east entrance to the Media Center building, opposite the main entrance.  They have been beautifully restored.

Now, these elegant vases and Whitestone-designed stone gateposts serve as landmark sentinels. If these vases and pillars could tell tales of all the Louisvillians who have passed by, they would speak of the social elite who visited Horatio Newcomb and the students of St. Xavier High School.

Several small bits of Louisville history, once forgotten, are still standing with pride.