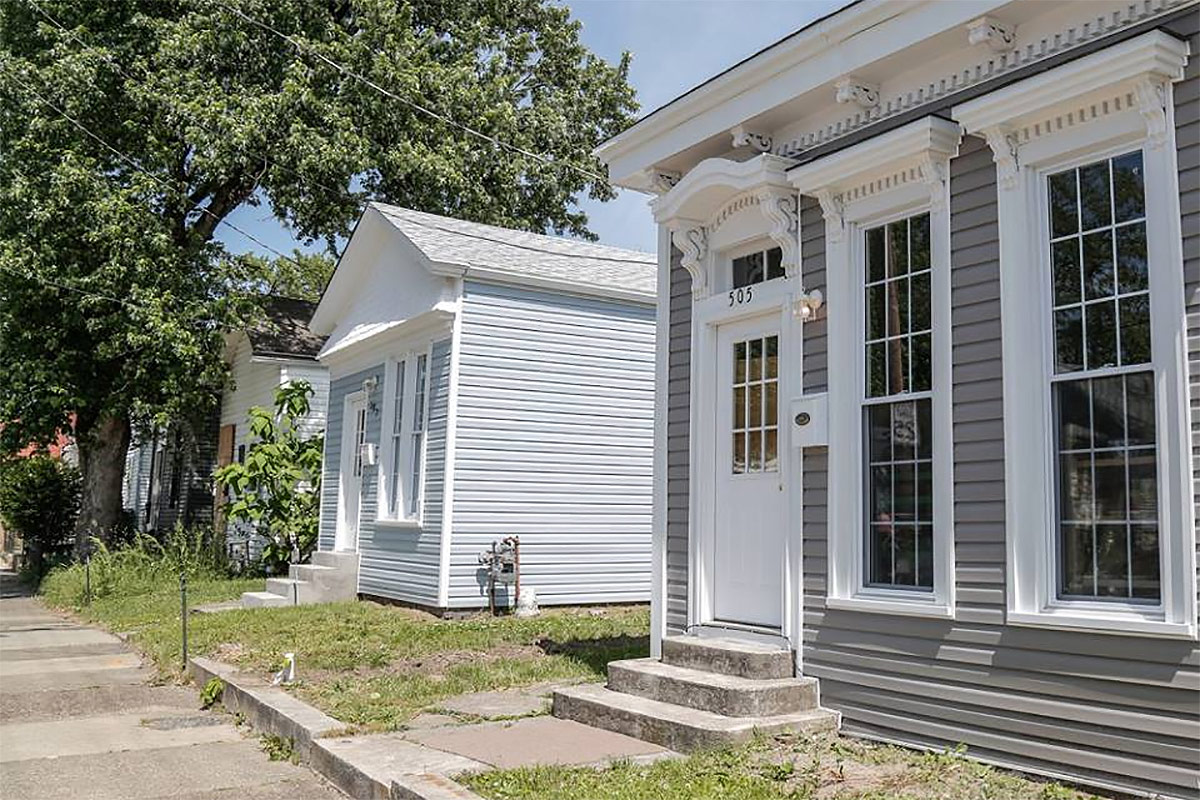 Louisville’s Portland neighborhood is going to the dogs—and that’s a good thing, according to Gill Holland, one part of the Artist Row Portland (ARP), a for-profit company helping to restore the neighborhood’s housing stock.

When the ARP renovates a former crack den into the nicest shotgun house on the block, it gives its tenants a discount for having a dog. The group believes the move will help transform the neighborhood of 10,000 people into a community. In a four-legged twist on Jane Jacob’s concept of “eyes on the street,” Holland believes paws on the pavement can achieve similar results as dog owners trudge alongside their canine companions through all kinds of weather at all times of the year. Encouraging dog ownership ends up a distinct strategy in creating community.

And that strategy is catching on across the country. “Walking the dog is a multi-daily event for most dog owners; it often serves as the beginning and end to our day,” wrote urban planner Andrew Zitofsky at the NRDC Switchboard blog. “For some, walking the dog is seen as a chore, for others it’s an opportunity to…explore their neighborhood. A dog walk might include a stop at the local park to sniff and run with the other neighborhood dogs, or a quick errand at a dog-friendly local shop.”

And the logical continuation of Holland’s idea of dog-walkers-as-community-builders is to make a town square—a dog park. As urban observer Richard Layman observed a number of years ago:

I am not a dog person myself, but I am deeply appreciative of well-managed dog parks because in many urban neighborhoods, dog owners are some of the only regularly walking people in a community–many neighborhoods outside of the inner core of Washington are dominated by automobiles and there is relatively little positive pedestrian activity on often empty sidewalks.

Dog walkers contribute positive activity not just to streets and sidewalks but to parks. It’s very easy for a park to devolve into a dangerous place. One technique for people committed to disorder to keep people (especially families and children generally) out of parks is to break a lot of bottles–broken glass keeps a park free of children, making it easier to conduct illicit business and activities.

Dog walkers help rebuild neighborhood groups committed to providing support and focus to neighborhood parks–parks that often are willfully or passively neglected by municipal governments overwhelmed by a variety of responsibilities, and lacking the resources to be able to provide regular maintenance and assistance and supervision.

There’s no dog park planned in Portland—yet. We asked Holland if he sees such a public amenity in the neighborhood’s future, and he responded with a definite “maybe.” “We hadn’t thought of a dog park,” Holland told Broken Sidewalk. He pointed out that Portland already has several regular parks such as Laporte Park and Boone Square. “We are always considering any and every.” (So hey, City Collaborative! How about a tactical urbanism dog park?)

But before the dogs arrive, people need places to live. The Artist Row Project is an outgrowth of Holland’s larger Portland Investment Initiative (PII) to remake one of the oldest corners of the city new again. It’s a partnership between PII and New Directions Housing Corporation (NDHC), which has decades of experience doing just such community building.

ARP launched two years ago with an initial budget of $11,000 from Holland and a goal of creating an arts district between 15th and 26th streets north of Main Street from the bones of run-down shotgun houses. The group announced this June that it had grown significantly to a budget of $600,000. And there’s plenty of housing stock to deal with.

According to a January 2014 report by the Network Center for Community Change (NC3), nearly ten percent of the city’s vacant or abandoned property—over 400 structures—is found in Portland.

Last week, Serchuk reported that ARP landed another $250,000 in private funding, bumping its coffers up to $790,000—all from private sources. The group uses those funds to buy the worst houses on the block in an effort to increase the fortunes of its neighbors. “We’ll take the worst one that needs the most work and hope other people take the one that’s not so bad,” Holland told Serchuk.

“We are practicing urban acupuncture,” Holland continued, referring to a practice of making a large impact as efficiently as possible. The concept was popularised in Louisville by architect Kulapat Yantrasast of wHY, who is also part of the PII team. Yantrasast also used “architectural acupuncture” to describe his interventions at the Speed Art Museum.

ARP owns ten homes in that 11-block span—including two former crack dens—and its new influx of funding will allow the group to take on four more. One of those is already in the works, Serchuk reported: a dilapidated shotgun house at 1847 Bank Street that ARP is buying from Habitat for Humanity for $5,500. The average house ARP purchases costs around $10,000. The median value of a single-family house in the neighborhood is $27,600, according to the NC3 report.

But just because ARP picks up these humble abodes on the cheap doesn’t mean it’s raking in the money. The for-profit group is an impact investment firm, so it looks at more than just the bottom line in developing the neighborhood. They hope to show others that these renovations can be done for profit, even in this case of these extreme rehabs.

ARP invests around $65,000 per structure to get it in occupiable condition. That level of investment makes some money, but the level of impact on the neighborhood is even greater than that profit.

Once they’re fixed up, the homes are rented for $650 per month, or, as Serchuk noted, $620 if the tenants have that much sought-after dog.

In a neighborhood of nearly 4,000 single-family houses, ten or 15 or a hundred might seem like a drop in the bucket. But by transforming the worst houses—that acupuncture Holland described—the entire neighborhood can be transformed. Creating a tight-knit artist row is hoped to spur waves of regeneration across the slowly awakening neighborhood.

[Correction: The original version of this article misstated the name of ARP and its organizational structure. The official name is Artist Row Portland, structured as a for-profit and launched in 2013. The article has been updated.]