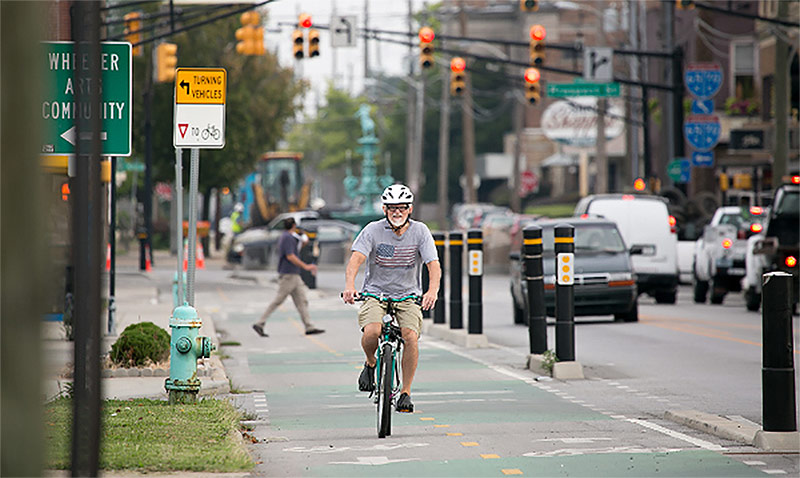 [Editor’s Note: Louisville recently announced plans for its first protected bike lane on Lexington Road, a project that we’re excited to see move forward. Louisville is playing a bit of a game of catch-up with other cities in terms of new bike infrastructure, but we’re slowly trudging forward. Here, People for Bikes’ Michael Andersen rounds up new protected bike lane announcements across the country. Let’s speed up building safe streets for bikes, Louisville!]

Spring is three weeks away, and that means it’s time for one of American cities’ newest rituals: announcing the year’s protected bike lane construction plans.

Every few days over the last month, another U.S. city has released plans or announced progress in building protected lanes. Even more excitingly, many are in downtown and commercial areas, which tend to have the highest latent demand for biking. Let’s take a scan from east to west of the projects that popped onto our radar in February alone, to be built in 2015 or 2016:

Boston is “heading toward” a firm plan for protected lanes on the crucial Commonwealth Avenue artery between Boston University Bridge and Brighton, Deputy Transportation Commissioner Jim Gillooly said Feb. 9. In a Feb. 8 column, Boston Globe columnist Derrick Jackson endorsed the concept on the strength of a trip to Seattle, where he rode a Pronto! Bike Share bicycle down the 2nd Avenue bike lane.

“I did something here I am scared to death to do in Boston,” Jackson wrote. “I bicycled on a weekday in the city’s most bustling business district.”

New York City seems likely to upgrade Columbus Avenue to have more continuous bike protection past the David H. Koch theater, after a Feb. 10 thumbs-up from the local community board.

Columbus, Ohio said Feb. 2 that a 1.4-mile bidirectional protected lane on Summit near the Ohio State University is “just the beginning” of plans for biking improvements, thanks to advocacy group Yay Bikes and a receptive city staff.

Detroit is installing southeast Michigan’s first protected lanes this year on a “very short segment” of East Jefferson. Advocacy group Detroit Greenways says it’s “precedent setting and could serve as a model for all of Detroit’s major spoke roads.”

Indianapolis said Feb. 25 that it’s adding protected lanes to New York and Michigan streets this summer, modeled after its 2011 project on Shelby Street.

Minneapolis announced Feb. 26 that it’s planning to add one-way protected bike lanes on 32 blocks of E. 26th and 28th streets. The projects will repurpose general travel lanes or remove peak-hour parking from the streets. This is a particularly important step for the city because the routes run parallel to the celebrated Midtown Greenway off-street path, meaning the city is working to add comfortable bike routes that connect to its important commercial destinations instead of just running nearby them.

Denver started to formally tackle its proposal for protected bike lanes on Broadway, the crucial cross-cutting street that runs north and south through downtown, the Denver Post reported Feb. 25. “Anything that increases traffic and access to the area is helpful for us economically,” Sweet Action Ice Cream owner Chia Basinger told the newspaper, explaining his support for the proposal.

And Seattle announced in a Feb. 26 open house that protected bike lanes or a dedicated bus lane are both options on Rainier Avenue, one of the main commercial corridors of the city’s southern neighborhoods. Who knows — maybe that Boston Globe columnist will be able to check out Rainier Valley on his next trip west.