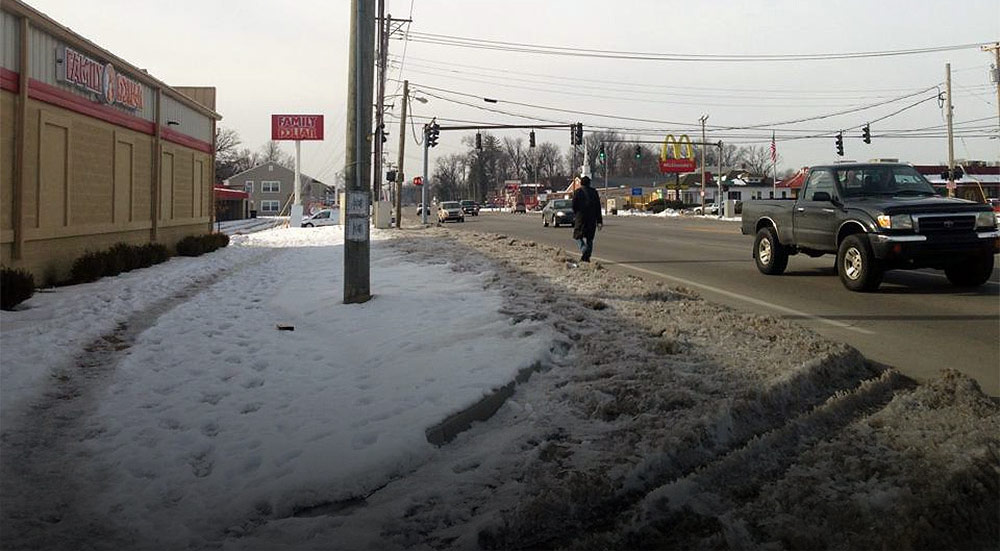 It’s a problem in just about every city that gets snow—sidewalks become treacherous unshoveled messes in the winter. In many cities—including Louisville—the responsibility of clearing the sidewalk falls on the property owner or tenant in the building fronting the street. And in Louisville, that responsibility is sometimes upheld and oftentimes neglected. Even today, as more winter weather bears down on the region, countless sidewalks remain unshoveled hazards for pedestrians.

If you don’t shovel your sidewalk, you’ll get slapped with a fine ranging from $25 to $100—or more likely you won’t. Louisville doesn’t actively enforce sidewalk shoveling, rather opting to inspect sidewalks and potentially issue fines only when a complaint has been filed. But it appears that even when a complaint has been filed, Metro Louisville has only issued letters of warning, according to a Courier-Journal report on a recent Metro Council hearing.

Take a look at these snow-covered sidewalks around Louisville, the story continues below:

According to the newspaper, Vanessa Burns, director of public works, told the council, “We need to figure out a way to get people to be more responsible.” We’d suggest enforcing the existing ordinance and issuing fines to people who do not follow the law—lots of them. Compare, for instance, what would happen if we issued parking tickets in the same way: There would be rampant parking abuse. It’s partly due to the threat of a parking ticket and its associated fines that keep street parking in check.

And it’s not okay that Louisville pedestrians are treated as second class citizens during winter weather. With all the effort expended to clear streets and highways across town—no small undertaking—people who don’t rely on cars to get around need equal protection—and right now the system is failing.

Ordinances like Louisville’s are common in other cities. According to Bloomberg Business:

Most cities have the authority to levy fines for not shoveling your sidewalk after a snowstorm. In New York, the fines can be $100 or more. Boston charges at least $50 for each day a sidewalk remains covered by snow. Fines in Philadelphia run from $50 to $300, while Washington just enacted a law(PDF) fining residences $25 and businesses $150 for an unshoveled walk.

There seems to be a great deal of confusion about who is actually responsible for clearing sidewalks. For instance, Rebecca Matheny, executive director at the Louisville Downtown Partnership, sent out a letter this morning to downtown businesses reminding them to keep their sidewalks clear:

As in the past, the Louisville Downtown Partnership will have our personnel clearing the crosswalk areas of intersections within the Downtown Management District. The Public Works Department of Metro Government will be responsible for keeping streets clear and passable by plowing excess snow into the parking lanes. Per Metro ordinance, private property owners will be responsible to keep the sidewalks in front of their businesses clear and safe.

Beyond the sidewalks, it’s important to note that if there’s a TARC stop in front of your building, it’s your responsibility to keep that clear as well. Jon Reiter, communications manager at TARC, told Broken Sidewalk in an email, “the responsibility of shoveling and ice removal around [TARC] stops falls to the property owner, similarly to how it operates with sidewalks.” At the Metro Council hearing, Councilman Tom Owen noted the danger of snow and ice piled up at TARC stops—he rides the bus himself. He suggested the council take up the issue in the next budget.

But the need to create a safer experience for pedestrians and transit users is imminent with up to a foot of snow expected to fall in the Louisville area. Mayor Greg Fischer today issued a plea to citizens to do their part, urging people to clear a wide swath of sidewalk so citizens using wheelchairs and walkers can pass. “We also need citizens to help us remove snow from around the nearly 5,000 TARC bus stops,” Fischer said in a statement. “During the last snow, many TARC stops became a hazard because they were icy and frozen.” He added that various Metro agencies, TARC, and inmates from Metro Corrections have formed the “TARC Dig Out Team” to target high-traffic bus stops.

With this snow, we’re calling on Metro Louisville to actively enforce the sidewalk snow removal ordinance in key locations across the city, including Downtown Louisville and top commercial corridors like Bardstown Road or Frankfort Avenue. This is first a matter of basic safety, second a matter of business as it’s important to keep the local economy up and running even in the wake of heavy snowfall, and third a matter of common decency.

The only way to get everyone to shovel his or her sidewalk is to enforce the ordinance that was created for this very purpose. A $25 to $100 fine is the tough-love teaching tool that has become necessary to ensure that sidewalks are actually cleared. And perhaps those fines can be saved to an account that funds the TARC Dig Out Team in future years—or even develop a higher-minded strategy for keeping sidewalks clear.