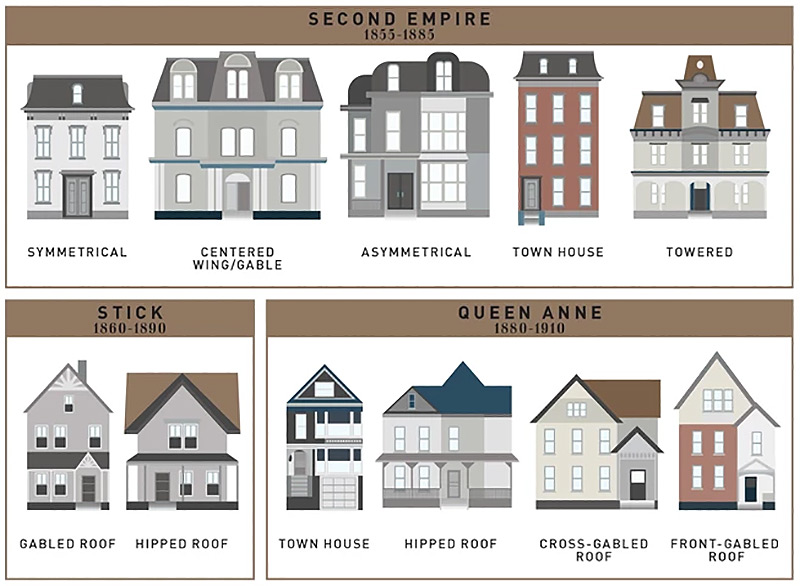 Louisville is a city of houses. More than any other type of building, houses dominate the built landscape of the city. We’re fortunate to have a wide-ranging variety of house styles across the city, from the ubiquitous shotgun house to the ornate Victorian mansion to the Arts & Crafts bungalow, there’s plenty of variation. This chart by designers at Pop Chart Lab chronicles all those housing types and their variants in one neat diagram, showing how America’s housing stock evolved through the years. According to the designers:

From 17th century Postmedieval English abodes to 19th century Tudors all the way through the “McMansions” of the 1990s, this detailed diagram of hand-illustrated domiciles brings together 121 American houses in all, sorted into seven major categories and 40 subdivisions.

It’s fascinating to see the style, shape, and size of the houses evolve through the years, most poignantly as the chart moved into the post–World War II years of sprawling ranch houses and McMansions. As seen locally in places like Norton Commons, the older influences are returning in New Traditional architecture.

The Washington Post‘s Emily Badger shared a few other observations on the WonkBlog:

All that space is a sign of our times — of the relative wealth to afford it, thegovernment policies that incentivize it, the tastes we now have for third bathrooms and fourth bedrooms (even though the size of the typical American household has actually been shrinking).

In fact, in many ways — most of them more subtle — the American single-family home has changed with time in ways that say much about us and how we live. Vertical town houses built in the 1800s gave way a century later to horizontal homes, 3,000 square feet on a single floor. Compact ways of living that made sense when we got around on foot faded with time in favor of the spacious homes made possible by ubiquitous cars. And the popularity of cars changed the very design of our homes, too, as we created places to park them indoors.

Do you have a particular favorite house style on the chart? How many of these styles have you seen around Louisville? Share your thoughts or observations in the comments below.

You can view a high-res version of the poster here or purchase your own here.