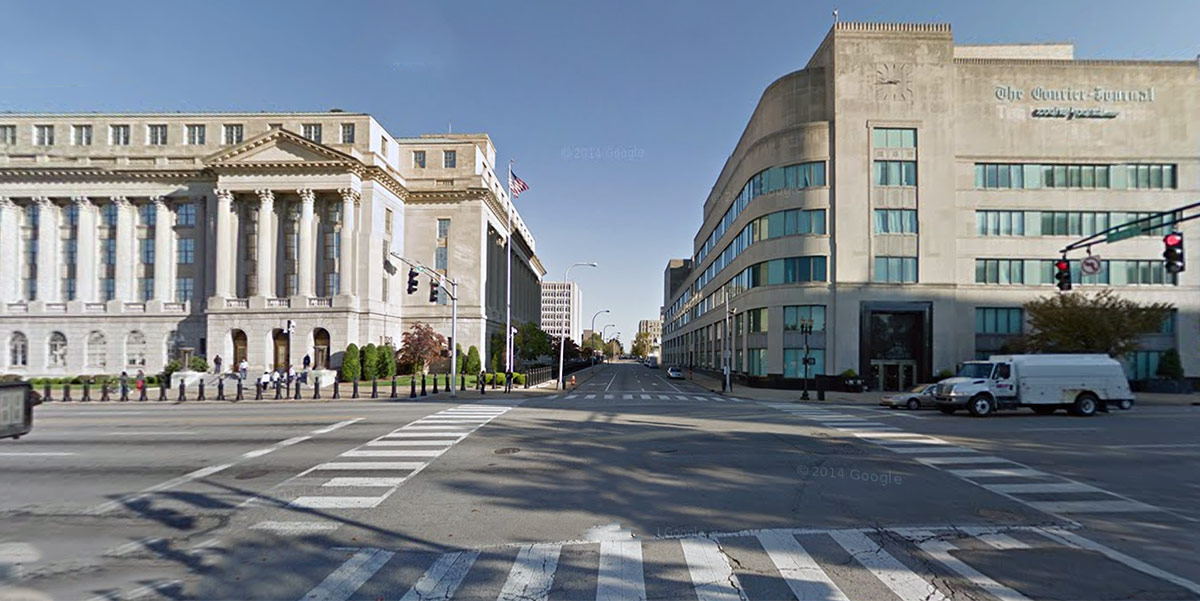 Bike Louisville‘s Rolf Eisinger is rolling out the city’s newest bike lane, a 1.4-mile stretch along Sixth Street between River Road in Downtown and Zane Street in Old Louisville. Except for two blocks at the route’s north and south ends, Sixth is a one-way street moving south.

“It’s a great connection from the middle of downtown to a lot of other good bike lanes. It connects to Muhammad Ali going west and to Kentucky Street going east,” Chris Glasser, president of Bicycling for Louisville (B4L) told Broken Sidewalk. The city opened a pair of bike lanes on Chestnut Street and Muhammad Ali Boulevard earlier this year.

According to Bike Louisville:

The reconfigured cross-section improves safety for cyclists along the route and reduces the average vehicle speed within acceptable ranges of the posted speed limit. The excess pavement from the removed lane will be used to provide an additional buffer for cyclists by separating the bicycles from the vehicle travel lanes. This section of bike lane will improve connectivity by providing a direct link for cyclists between the River Walk multi-use trail and buffered bike lane on Kentucky St and shared lane that extends on 6th St after Zane St.

These changes are expected to create a safer Sixth Street, a welcome move as the city continues with its Look Alive Louisville street safety campaign. Between January 2012 and July 2015, Bike Louisville reports that there were 144 collisions on this stretch of Sixth Street resulting in 50 injuries.

“This is going to be a really important piece of bike infrastructure,” Glasser said. “It’s one of those projects that we think will really move the needle on bikeability in Louisville.” Growing the city’s bike network with infrastructure like this is a critical part of the city maintaining its new Silver bike-friendly rating from the Bike League.

The plan varies block by block as road conditions change. Most of the changes involve shrinking driving lanes to safer widths, from ten to 11-feet wide. South of Broadway, one lane of the street would make way for a buffered bike lane. Here’s the lineup beginning at River Road and moving south:

Besides the addition of bike lanes, the proposed changes would also bring traffic calming benefits. For instance, between York and Breckinridge streets, Bike Louisville’s traffic survey shows a right-lane average speed of over 40 miles per hour in a neighborhood setting with a 25 mph limit. Calming the traffic here would bring safety benefits to all road users.

Glasser is pretty excited about the project, but is watching closely for any “bikelash” from motorists who might oppose the project. “We’re using roughly the same treatment from Broadway to Kentucky that we used for Breckinridge and Kentucky Streets—which is to say, we’re cutting a driving lane and replacing it with a wide bike lane,” Glasser explained. “I worry that there’ll be some questions and a minor uproar from within Metro Council.”

Bike Louisville will study changes in collisions, speeds, bike counts, and automobile traffic counts before and after the infrastructure changes. “The traffic counts on Sixth are about one to two thousand cars per day less than what’s on Kentucky and Breckinridge, so the traffic should still flow pretty steadily, even at rush hour,” Glasser added.

Two public meetings are scheduled to present the plans and gather feedback.

Funding for the $50,000 project comes from Mayor Greg Fischer’s Urban Bike Network budget for 2016. Design and engineering on the route was completed by Metro Louisville Department of Public Works and Gresham, Smith & Partners. Construction is expected to begin the week of September 28.