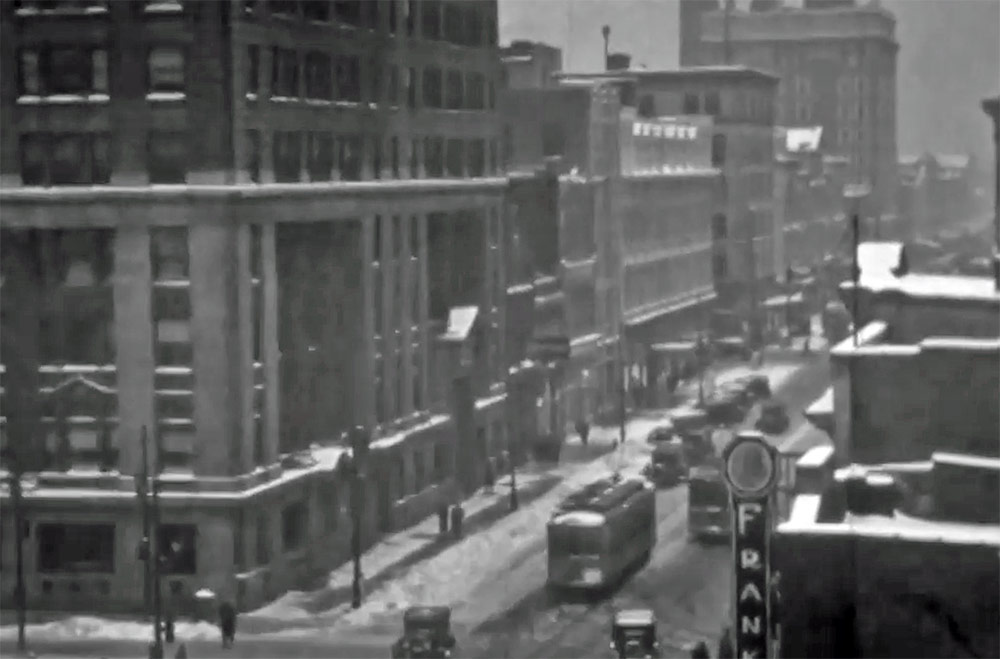 While Louisville’s recent spate of Winter weather is as bad as many can remember, be glad we’re not Boston. Or Portland, Maine. But winter weather is a regular part of living in Louisville. Take, for instance, this video shared by the Filson  Historical Society, of a winter storm in 1933.

The film shows footage taken from around the old courthouse, now Metro Hall, in Downtown Louisville. The aerial views were most likely taken from the long-demolished Realty Building that once stood as a Chicago-style skyscraper overlooking the courthouse steps. According to the Filson:

This material was filmed by Judge Arthur E. Hopkins during the winter of 1933. Hopkins was a Louisville attorney and judge who had a passion for film and photography. Portions of his film collection, which resides at the Filson Historical Society, have been preserved through grants from the National Film Preservation Foundation, and through generous donations by the public.

The clip shows some amazing scenes, such as crews actively clearing snow from the courthouse steps and the sidewalks along Jefferson street. A number of streetcars are also visible gliding smoothly on steel tracks through the snow.

Speaking of clearing sidewalks, here’s a reminder from Metro Louisville Public Works that it’s your responsibility to clear snow from the sidewalks in front of your house, building, or business:

We’ve had lots of inquiries about who is responsible for clearing snow from the city’s sidewalks. Snow covered sidewalks have led many people to choose walking in roadways over trudging through the white stuff on the sidewalk. The answer is that property owners and tenants must perform this function.

Below is the Louisville Metro Ordinance that spells out the responsibility of property owners for clearing sidewalks.

The ordinance goes on to state that “Any responsible party failing to comply…shall be subject to the following fines: not less than $25, nor more than $100.” We also urge that snow removed from the sidewalk be placed on private property such as lawns, and not in the street where it would slow or reverse progress of plowing crews.