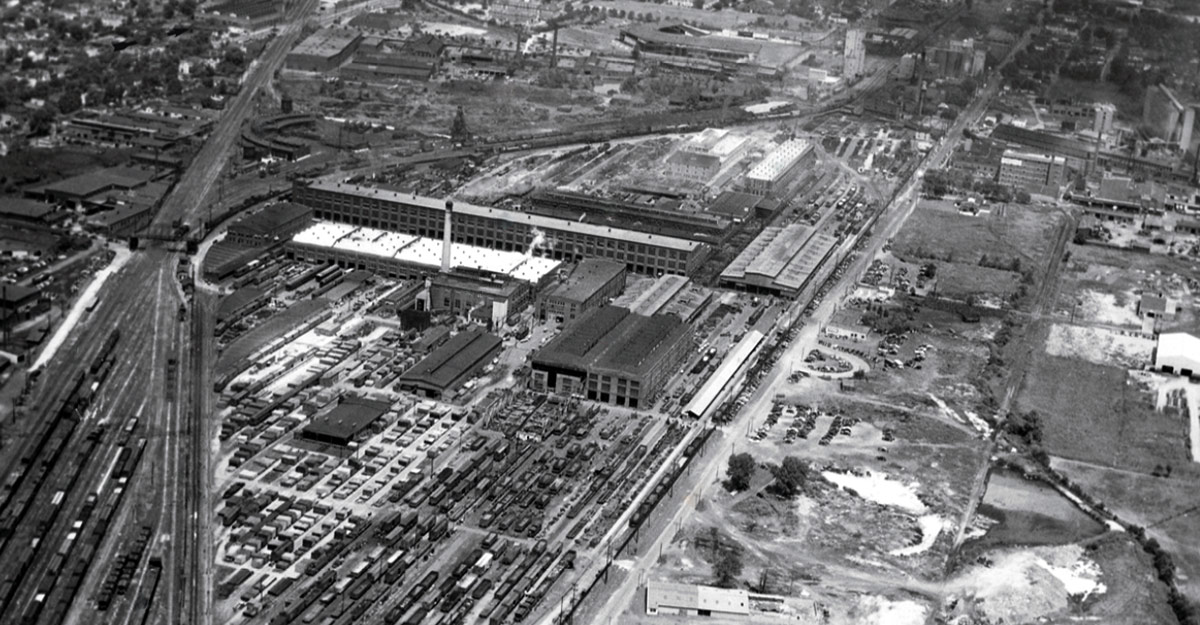 On Sunday, October 25, the Louisville Historical League (LHL) will explore the history of the South Floyd Street corridor near the University of Louisville‘s Belknap Campus. The 1.5 mile walking tour will begin at 2:00p.m. in parking lot A near Papa John’s Cardinal Stadium, and will be led by LHL board member Mike Zanone.

The area has undergone some major transformation over the past 20 years. U of L has opened new football, baseball, & soccer stadiums; Central Avenue has been extended from South Third Street to Crittenden Drive; and the university recently opened the Brook Street connector road through the former KY Wagon Works property, where a research & technology park adjacent to the Speed Scientific School campus is planned.

For most of the 20th century, the area was characterized by heavy industry, including the Louisville & Nashville (L&N) South Louisville railroad yards and several food processing plants. The land was originally part of the Samuel Churchill plantation in the 19th century and later part of a dairy farm owned by the Merhoff family.

The southern edge of the university’s Belknap Campus has had many other land uses as well before the school acquired the property there in 1923. A book by the late Louisville historian Sam Thomas described a city cemetery that was briefly chartered in the area, then replaced by one of the city’s early parks, before becoming a work farm for Jefferson County’s juvenile delinquents. During the Civil War, an African American regiment was also encamped in the area, along with other military facilities such as hospitals and defensive fortifications to protect the city from a Confederate invasion.

The next century would also see a military presence in the area as well. In 1917, part of the Merhoff property between Crittenden Drive & Floyd Street was leased by the U.S. Army for a cavalry training station that was part of Camp Zachary Taylor during World War I. During WWII, a set of military barracks was built to house Navy officer recruits as part of the V-12 program at the University of Louisville. These buildings would provide housing again in the 1960s, too.

The 20th century not only brought the arrival of heavy industry and higher education to this district, it brought sports & entertainment venues as well, long before the current collection of stadiums that have given the area its current identity. Parkway Field opened in 1923 and was the city’s home for professional baseball for the next 33 years, including both the city’s minor league Louisville Colonels and many of the Negro League baseball teams that represented the city during that period. And today as many as 170,000 race fans converge on the area on their way to Churchill Downs every Derby Day, which has been drawing huge crowds to South Louisville since 1875.

The area’s unique topography and infrastructure will be examined during the walk, including how that has shaped this area’s development.

The district has seen its share of disasters, too; many Louisvillians will remember the infamous sewer explosions near the old Ralston Plant that shook the city one morning in February 1981. Floyd Street has also been visited by several floods, such as in 1937 and 2009, and by man-made water events from several water main breaks that retraced the course of Dry Run, a historic tributary of Beargrass Creek that flowed through the area a few centuries earlier. More recently, a small tornado hit the area near the football stadium in 2011 after touching down at Churchill Downs.

The walking tour will begin at 2:00p.m. on Sunday, October 25 near the pedestrian tunnel that runs under Central Avenue. Parking is available in South Lot A of Papa John’s Cardinal Stadium, at the southwest corner of Floyd Street and Central Avenue. The parking lot is accessed by taking Floyd Street south from Central Avenue and turning right at the first entrance off of Floyd. This event is free and open to the public. For more information contact Mike Zanone via email or call 502-637-3591.