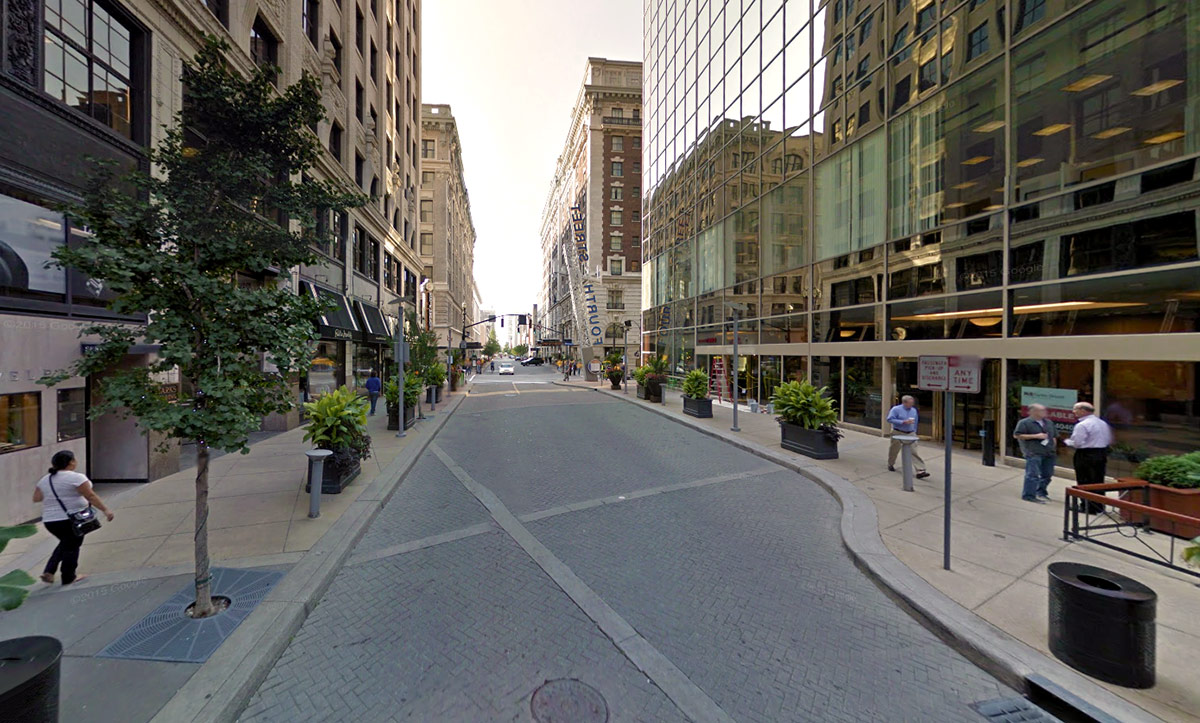 It is not unreasonable to say that urban Louisville is currently going through one of the most profound periods of change in its modern history—at least since the devastating urban renewal period of the 1960s, ’70s, and ’80s. A downtown that was quiet and largely dormant for most of my short life has, within the past 5–10 years, come alive with new energy and activity.

As difficult as it was to move away from Louisville last year, my visits home have proven to be an interesting experience from an Urban Planning perspective. In addition to seeing family and old friends, I get to see how the city center has changed and progressed during this fascinating time. When I visited Louisville in August, I decided to focus my explorations on one street in particular: South Fourth Street in Downtown.

Fourth Street is simultaneously Louisville’s most storied and most tortured street. Most locals are familiar with its past life as the center of the city’s social, commercial, and civic life. Since the end of the riverboat days, all of the major hotels, theaters, and department stores were located on Fourth. As late as the 1960s, most Louisvillians ended up on Fourth Street at one point or another during their typical daily routine.

Alas, that version of Fourth Street is long gone. Like so many downtown commercial districts, the rise of the suburbs quickly destroyed the street’s position as the city’s primary shopping and entertainment district. To make matters worse, the street became the target of one “revitalization” scheme after another—redevelopment proposals that, while perhaps well intentioned, did far more to hasten the avenue’s decline than reverse it.

By the time I came around in the early 1990s, the street was almost completely dead. For most of my life, I knew it only as a quiet stretch of mostly empty buildings, with the beautiful Palace Theater and grand Brown and Seelbach Hotels being the only points of interest in the whole district. But what I saw during my recent visit has me believing that that is in the process of changing.

After spending some time in Nulu, I once again took the free electric circulator bus to Downtown. (If you hate figuring out or paying for parking in Downtown, the quiet, clean and quick circulator service is a great alternative.) Beginning my stroll south along Fourth Street from Main Street, nothing seemed all that different for the first few blocks, with the exception of the new Jim Beam Urban Stillhouse in 4th Street Live!. Other than that, the entertainment development was still the bland and decidedly uninteresting tourist trap that it has always been. However, that may not be the case in the near future: Back in July, the entertainment venue announced that it would fill vacant tenant spaces with more locally oriented restaurant/entertainment concepts, including a local farm-to-table restaurant and another focused on higher quality southern cuisine. It’s still 4th Street Live! and has plenty of persistent problems, but this shift in focus could signal a realization on management’s part of a key aspect of being successful in Louisville: in this town, we always prefer local.

It wasn’t until I got to Fourth and Muhammad Ali Boulevard that I started to see some genuine improvements. This is one of Downtown’s most impressive intersections, with almost all of the corners occupied by large and beautifully detailed historic buildings. The storied Seelbach Hotel is a Louisville institution that has been an anchor of South Fourth since it moved from Main Street in 1905.

The massive Starks Building is another downtown landmark, which will soon become the definition of “mixed use.” It was acquired last April by Hudson Holdings, a development company with an open preference for rehabbing historic buildings. Plans call for restoring the building and converting it to—takes deep breath—100 apartments, 200 hotel rooms, 3 restaurants, multiple bars, a health club, and a coffee shop. I look forward to see what such a dramatic transformation will have on this part of downtown.

But the most significant visual change so far at this intersection has to be the $85 million transformation of the former Stewart Dry Goods Department Store into a 304-room Embassy Suites Hotel (along with several restaurants and a CVS on the first floor). Stewart’s closed its doors long before my time; in fact, my only real memory of the building is as the vacant former Hilliard Lyons Center. With its dirty facade, empty storefronts, and moldy green canopies, the building was a sad reminder of the despondent state of downtown. But the building I saw in August could not be more different. From its bright and clean facade to its renovated and occupied retail and restaurant spaces, the building seemed to embody the renewed, vibrant  energy that is permeating (if slowly) through the whole South Fourth Street corridor.

Moving south past the intersection of Fourth and Ali, I strolled through the district’s retail district, or at least the beginnings of one. The coordinated effort to bring genuine retail options back to Fourth Street has brought some noticeable changes, the most significant being the street itself. The new streetscape project was progressing nicely, replacing another block of tired brick pavers and weedy trees with clean, simple concrete and granite sidewalks with spacious planters. Guthrie Street was newly renovated and reopened to vehicular traffic, erasing the last remnants of the failed River City Mall.

The retail spaces along South Fourth were largely unchanged from years past. The same wig shops and vacant storefronts that have been there for decades were still mixed with the new, locally oriented shops that moved in back in 2012, as a concerted effort to revive some semblance of the old shopping district. Unfortunately, I did see one new vacancy, but it’s my understanding that the other newcomers are doing quite well in their new locations.

Encouragingly, they will soon have new neighbors. The magnificent Speed Building will soon be home to Birch + Rust Goods Co. and Market, a shop selling “leather goods, candles, soaps, beard oil, apparel, antiques, vintage, and more.” Everything will be locally made. The new business will initially occupy the ground level retail space at 313 Guthrie Street, but the owners have plans to expand into neighboring 311 and 309, and will fill those spaces with a furniture store, coffee shop, and even a barber shop. Of course any article about progress being made on South Fourth would be incomplete without mentioning the impact Bill Weyland and his CITY Properties Group have had on the corridor. His newly built hotel—with its amazing 8UP Elevated Drinkery & Kitchen—and renovated Guthrie Coke Building (now apartments over retail) and Wright-Taylor Building (now a major music venue) are having a visible impact on the intersection of Fourth and Chestnut Street. For most of my life, those two sites were occupied by an empty gravel lot and dormant historic buildings (respectively), but with Weyland’s investment, they are great anchors for the district. They bring new residents, hotel guests, and entertainment seekers to a street that has desperately needed them for decades.

The Speed Building and many other historic structures are still mostly underutilized and in need of significant renovations. Additionally, the suburban-style expansion of Kindred Healthcare’s headquarter campus shows that Metro Louisville is still prone to making the same mistakes that have plagued South Fourth during the decades since its mid-century decline.

Sadly, the glory days of Fourth Street are gone for good. It’s unlikely the street will again attain the same status of urban Louisville’s cultural and economic center. But the signs of change I witnessed pointed to the beginnings of a transition, from a strip of vacant and worn out buildings to a healthy, active street with a decent mix of living, eating, shopping, and entertainment options.

South Fourth certainly has all the pieces of a great urban street: narrow roadbed, quality historic architecture, solid anchors. We as a city just have to figure out the best way to fit them together. The challenges facing Fourth Street are many, and a true revitalization will take lots of time and hard work. But with the rapidly accelerating pace of change in downtown, the days of Fourth Street being little more than a vacant reminder of the past may finally be numbered.