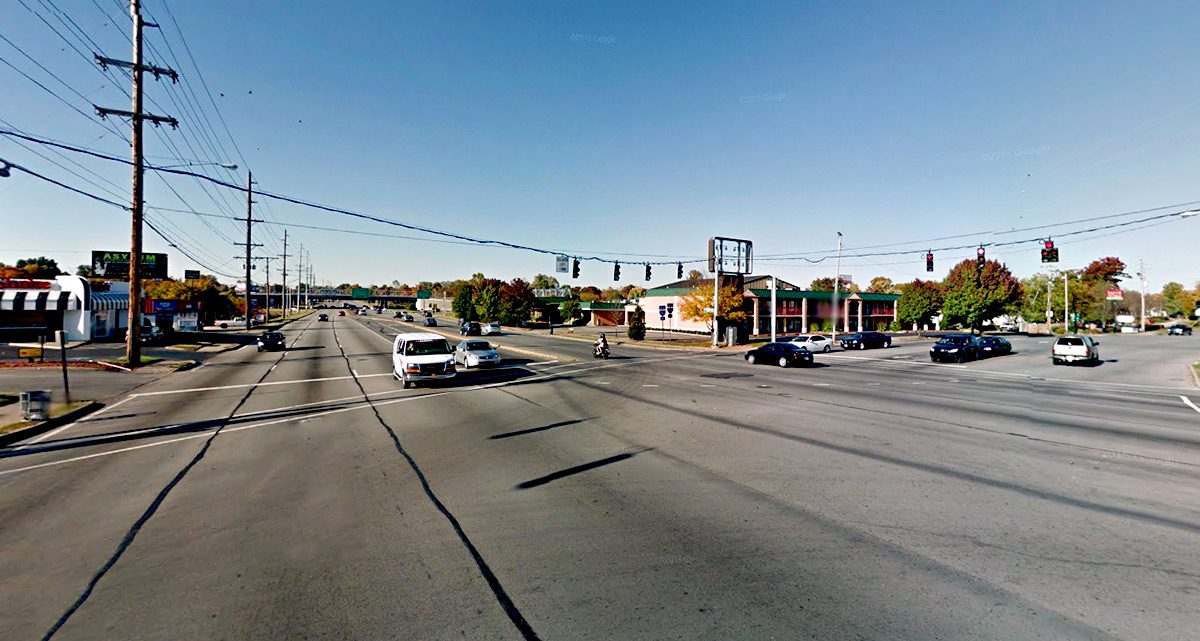 The intersection of Bardstown Road and Goldsmith Lane is terrifying. Crossing Bardstown Road is no small feat; pedestrians must face down 122 feet of pavement—eight lanes of traffic. Across town at Second Street and Broadway, pedestrians have to maneuver 75 feet to make it across seven lanes.

Pedestrians in Louisville deal with these obstacles every day—we’re the 17th most dangerous city for pedestrians according to the annual Dangerous by Design report—and while these intersections are among the most dangerous in the city, their design isn’t novel. The Louisville Metro Police Department (LMPD) is targeting these sites for their rather frightful-sounding “Pedestrian Decoy Sting Operations”, but looking at these intersections, it’s clear that this approach can only scratch the surface—these places are simply not designed for pedestrians.

While the city embarks on its education and citation campaign to reduce pedestrian fatalities, cities across the country are redesigning roadways to accommodate increasing numbers of pedestrians, public transit users, and cyclists. Louisville should take an interest in how our contemporaries are tackling these problems.

The primary feature of many Louisville intersections is their sheer size. Good transportation planners always prefer the safety of short crosswalks. Crosswalks stretching over 100 feet, like the one on Bardstown Road, are especially treacherous, particularly for children, the disabled, and older folks who might require extra time to cross. Sting operations won’t shrink the road, but pedestrian refuge islands will. These are just what they sound like: protected islands in the middle of lots of cars.

On Bardstown, the south side of the intersection has an island but no pedestrian refuge and the north side is just pavement. The National Association of City Transportation Officials (NACTO) recommends an island that’s at least six-feet wide, but preferably 8–10 feet whenever a pedestrian must cross more than three lanes of traffic. The island should also include bollards to protect pedestrians from turning vehicles.

Eric Mongelli, a transportation engineer has some rules of thumb for these big intersections. “If you have to cross 60 feet or more of pavement, you may want to put in refuge islands or other treatments that can break up that crossing. And as far as the style of [crosswalk] marking goes, on busier intersections with multilane roadways, uncontrolled crossings or a lot of pedestrian activity, we recommend high visibility [crosswalk] markings, like on the Beatles’ Abbey Road cover.” Bardstown and Goldsmith have no such markings, their crosswalks barely visible as two faint lines of paint.

This intersection would also benefit from curb extensions, or neckdowns. Moving the curb further into the roadway shortens the intersection, improves visibility for the pedestrian and the driver, and reduces speeds—particularly for turning vehicles—because they narrow the lanes. A study in Oregon found that because of improved visibility, vehicles yield more quickly to pedestrians crossing at a curb extension.

Our other target intersection, Broadway at Second Street, features a whopping seven lanes (and no pedestrian island). But this intersection can also be made safer through design. The extra seventh lane, on the south side of Broadway, is a bus and parking lane. Planners have developed a solution for this exact scenario that benefits pedestrians crossing the street and waiting for the bus: bus bulbs.

Bus bulbs are a kind of curb extension that subsumes the entire lane at the crosswalk and runs the length of the bus stop. They shorten the distance of the crosswalk and prevent the bus from swerving into parking lanes, which creates re-entry problems during rush hour. They also leave space for street furniture, so riders can wait comfortably for the bus.

A third intersection being targeted by LMPD is Fourth Street at Market Street. This informal affair features six-ish lanes on the west side of the intersection, and four-ish on the other. There are no curb extensions, and despite the wide street width, no pedestrian refuge island. None of the four crosswalks have visibility markings. Herein lies Louisville’s fundamental problem as it relates to pedestrians: the infrastructure is inadequate.

Thankfully, fixing this stuff isn’t terribly expensive. Pedestrian refuge islands, depending on site conditions and landscaping, cost between $4,000 and $30,000. Bus bulbs, depending on drainage, utility relocation, and bus stop amenities, cost between $15,000 and $55,000. And depending on the design and materials, curb extensions can cost up to $30,000, but can be done well on the cheap.

Louisville is right to address the problem of pedestrian safety and the Look Alive Louisville campaign will help. But real improvements to the streets themselves must be made if Louisville wants to become a place where pedestrians feel comfortable and safe.