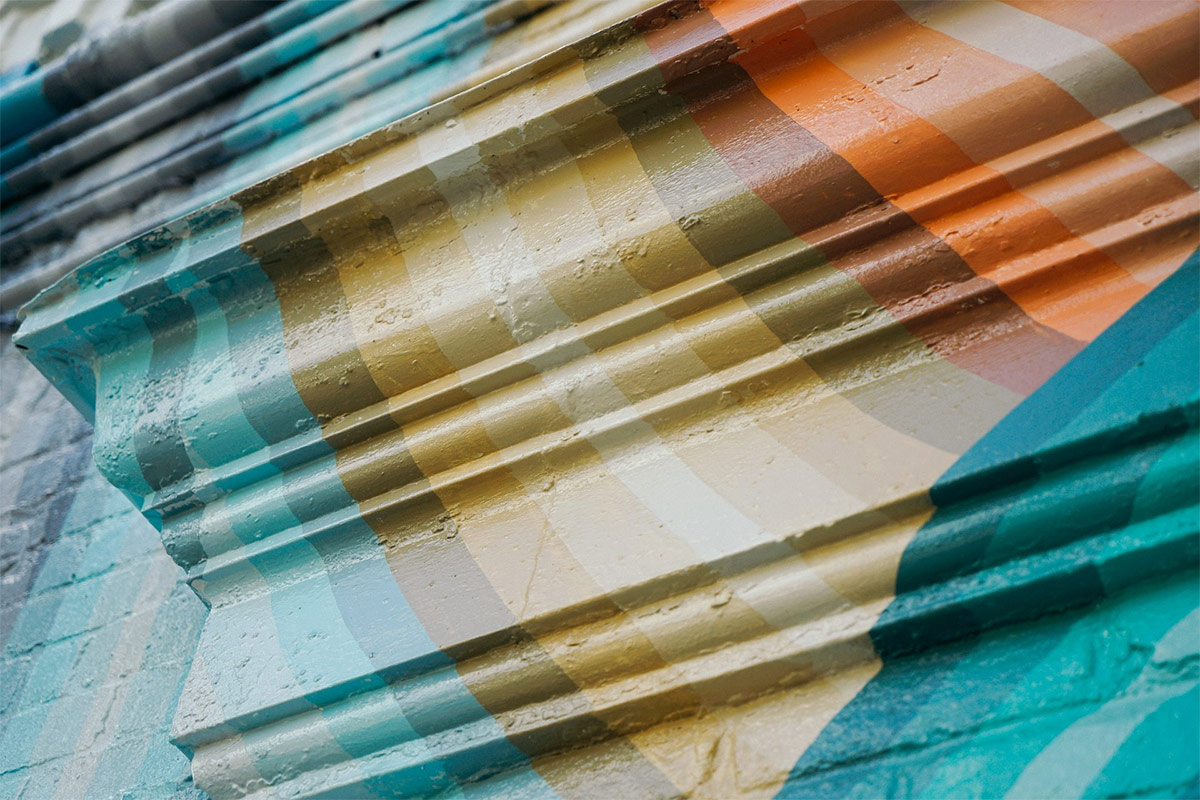 There is no shortage of public art in Shelby Park. Over the past few years, murals have been steadily popping up all over the neighborhood, on properties that have been vacant, abandoned, or otherwise unused.

Public art, however, is more than just a pretty painting; it’s the process of creating a place with an identity and an aesthetic that encourages social interaction, not just passive observation.

The most recent addition to Shelby Park’s art collection—called Sunshine & Shadow—was officially celebrates last week at 741 East Oak Street, where the soon-to-open Scarlet’s Bakery is located. Access Ventures, an investment group based out of Shelby Park, purchased and remodeled the building, but the company was looking for ways to activate the building’s Shelby Street facade.

“We wanted to fund and resource him for what’s appropriate and treat him like one of our own,” Terry told Broken Sidewalk at the recent block party. “From there, we started taking pictures of buildings we had here in the Shelby Park neighborhood and we sent them to Gibbs and asked, ‘Hey, which one of these buildings vibes with you, based off your design?’ So we landed on this building, Gibbs was able to do a small mock-up in his studio, and we moved forward with that.”

Gibbs noted that during the months-long process of painting the mural, he began having conversations with residents walking by, some of whom would offer a helping hand or say thanks for how the art brightened up the neighborhood.

“One person pulled their car over and start clapping,” Gibbs said. “This area has become a kind of destination now, with all the art projects going on. I really didn’t have an idea of how this mural would change the neighborhood, but I really saw the impact the longer I was out there working on it.”

Before being rescued and rehabbed, the building once housed a neighborhood pharmacy – the name of which can still be seen on the East Oak side. It later served as an apartment and consignment store. Now, it’s a bakery.

In many cases, public art has been used as the initial catalyst for placemaking. When a few motivated citizens take the initial plunge to improve their neighborhoods, it can make a splash large enough to attract the attention of (ideally, local) investors.

When it opens for business, Scarlet’s Bakery will function as a social enterprise of Scarlet Hope – a nonprofit that provides jobs to women leaving the adult entertainment industry – and promises modern twists on classic bakery fare: cookies, muffins, cupcakes, and coffee from Argo Sons Coffee, located right across the street.

Though there is no storefront shop attached to the Argo Sons facility (hopefully someday), it stands as the only coffee roaster in the neighborhood. However, on the left side of the building is a community asset that’s likely to draw even more positive attention to the area: a training lab where up-and-coming baristas can learn cupping and pouring techniques.

But is all this new commerce a direct result of public art? Maybe. There are many components that need to come together in order to improve public spaces, but visual art generally increases the visibility of an area, which can increase safety (see: eyes on the street). Most noticeable, however, is the slight uptick in walkability—especially on the intersection of Shelby and Oak Streets.

“With this building being on the corner—a corner with two one-way streets intersecting—the traffic tends to be a little fast,” said Chip Rogalinski, president of the Shelby Park Neighborhood Association. “What I’ve been noticing is that people are driving slower when they pass by this building just to take a look at the art, so already it’s making an impact on the way we interact with this space.”

Scarlet’s Bakery is slated for a soft opening on December 16, and a grand opening celebration on January 16.