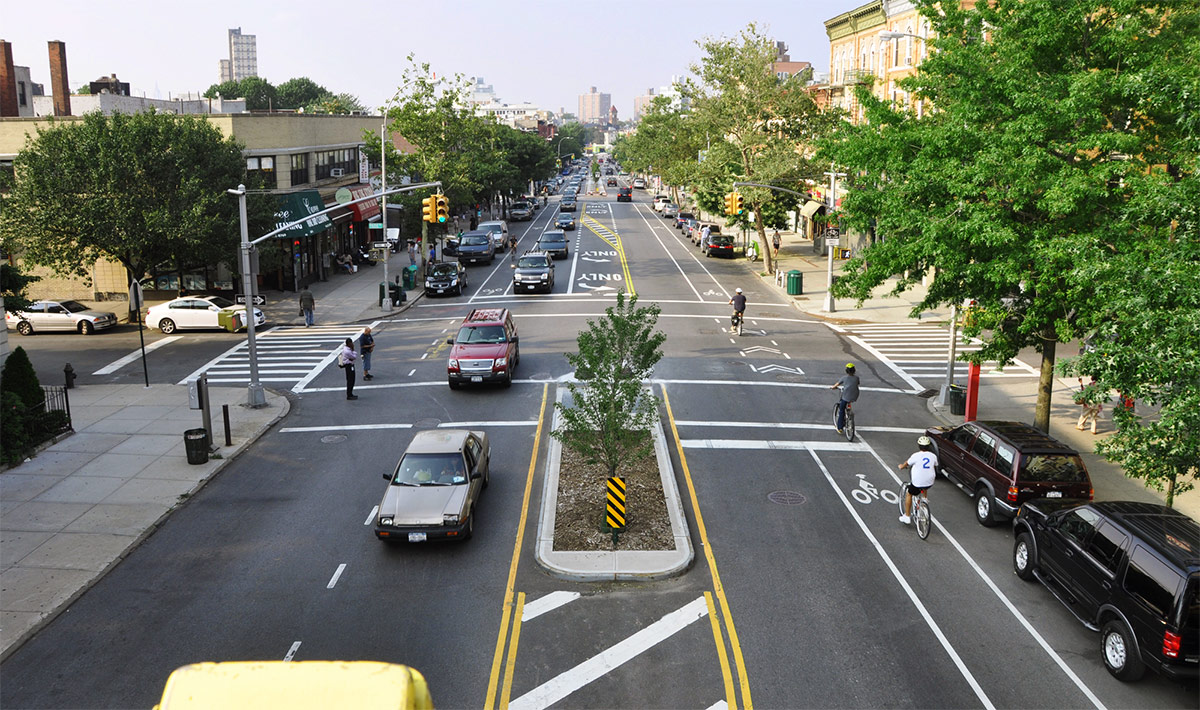 Louisville is in the midst of a pedestrian safety campaign called Look Alive Louisville. And for good reason. The city’s pedestrian death rate is above the national average—last year alone, 18 pedestrians died on Louisville streets and another 483 were struck by motorists. The numbers speak for themselves.

But unsafe streets don’t just affect pedestrians—they’re dangerous for all of us whether we’re in a car, on a bicycle, or walking. A new report has found the number-one contributor to unsafe streets around the world is suburban sprawl—and the reliance on driving it requires—and it offers some recommendations on how to combat the deadly streetscapes that needlessly kill thousands every year. This summer, the World Resources Institute (WRI) published its study, Cities Safer By Design, which explores how transportation design affects traffic safety. The policy research and analysis organization based in Washington, D.C. looked to major cities across the world to figure out what is and what is not working in creating safety in our streets.

It’s not a pretty picture. Louisville ranks worse than sprawling Atlanta in traffic fatality rate. Nearly twice as many are killed in Louisville per 100,000 residents than in Chicago, three times more than New York City, and quadruple the number as in Washington, D.C.

Internationally, Louisville’s safety numbers fall in line with cities like Montevideo, Uruguay; Accra, Ghana; and Kolkata or Delhi, India. We’re significantly more dangerous than places like Jakarta, Indonesia; Beijing or Shanghai, China; and Mumbai, India. World leaders in traffic safety—places like Stockholm, Sweden; Tokyo, Japan; and Berlin, Germany—experience a mere fraction of the death and injury on their streets as we do at home. Safer streets are possible.

But we already know that Louisville’s streets lag in safety. How can we improve them? Most agree than they need to be redesigned. As part of our ongoing series on street safety, we’ve already looked at infrastructure changes at Look Alive’s target intersections and explored different types of road diets.

The Cities Safer By Design report suggests a number of design measures that can help Louisville achieve its safer street goals, beginning with redesigning out arterials, where most of the city’s deadly collisions already take place. Just take a look at the map below, and you’ll be able to make out most of Louisville’s major arterials by the trail of injured that have fallen along their lengths.

At the top of the WRI’s list of ways to increase safety on our streets is to shift from sprawling patterns of development—that rely on the car and generate more car trips—to a more compact pattern that considers walkability, cycling, and transit as a meaningful alternative to automobile use.

The report details a number of ways to combat unsafe streets through design, including these five guiding principles: block size, connectivity, vehicle lane width, access to destinations, and population density.

The report recommends block sizes between 250 and 500 feet. Louisville’s standard Downtown block measures in at the high end of that spectrum, with various blocks ranging from 250 to 750 feet. There’s no rhyme or reason to block sizes in the suburbs.

When streets like suburban arterials are scaled to the automobile, the report recommends breaking up the long expanses with midblock crossings and passthroughs on 400–500 foot intervals, with signals, raised crossings, or speed humps.

Another alternative is to add new streets to reduce block lengths. WRI notes that T-shaped intersections are safer for pedestrians than four-arm (+ shaped) junctions.

Connectivity refers to the directness of links and the density of connections in a street network. A highly connected network has many short links, numerous intersections, and minimal dead ends. As connectivity increases, travel distances decrease and route options increase, allowing more direct travel between destinations and creating more accessibility (Victoria Transport Policy Institute 2012). It affects the need to travel and the attractiveness of walking and cycling.

The report suggests creating links for pedestrians and cyclists where existing roads are disconnected. “A dense network of streets can disperse traffic rather than concentrate it on arterials,” the report noted. “So that traffic is more spread out and can be scaled accordingly.” The report adds that increasing connectivity with emphasis on pleasant pathways by foot can reduce the overall number of car trips.

Street width often means the roadbed width, which is the distance between curb edges on opposite sides of a street, or, where no curbs exist, from pavement edge to pavement edge. The width of space allowed for vehicle travel on streets greatly influences pedestrian crossing distance and the roadway width potentially available for other uses, such as bike lanes, parking lanes, or landscape curb extensions. This is separate from the width of the space between buildings or the total public right of way, including sidewalks and other areas not dedicated to vehicles.

The report calls for reducing vehicle travel lane width to increase safety and to prioritize pedestrians. This shortens the pedestrian crossing distance, slows traffic naturally, and decreases severity of crashes. The report adds that street trees and on-street parking can help visually reduce the width of a street and slow traffic.

Pedestrian destinations or points of interest are normally places that people find useful or interesting or where employment, retail, and leisure uses concentrate. High-quality networks should be provided particularly between key destinations such as residential areas, schools, shopping areas, bus stops, stations, and places of work.

The report suggests looking holistically at neighborhood design, including access to transit, parks, schools, shopping, etc., with an appropriate walking distance to each. It notes that designing with appropriate densities and a mix of uses to support these functions may be required. Having many walkable destinations improves sociability as people use public spaces and reduce the number of trips by automobile.

Population density refers to day and nighttime population per square kilometer or other unit area. Density is not directly related to safety, but can play a role in complementing other design factors. Locating more people within walking distance of services, public facilities, and transport can help reduce the need for driving.

The report notes that, compared to sprawling development, density reduces the amount of infrastructure required by the city, from roads to sewers to power lines. This, in turn, creates savings that can be used elsewhere in designing safer streets. Density also reduces the number of trips required by car.

“Density alone is not an indicator of traffic safety in cities,” the report explains, “but rather can be used with other community design elements in this guide to increase walking and cycling and reduce motorized travel. Dense communities should be coupled with safe street designs that protect pedestrians and cyclists.”

In 2012, the Centers for Disease Control and Prevention (CDC) also listed Louisville near the bottom of metros in the United States for traffic safety. Their report indicated Louisville’s metropolitan statistical area had a fatality rate of 11.8 per 100,000 residents. For people aged 15–24, that rate jumped to 14.8 per 100,000. Those numbers put the city well over the 50-city average fatality rate of 8.2 per 100,000 and above the national average of 11.1. The CDC study found that cities in the southeastern U.S. fared the worst for street safety.

Both the WRI and CDC reports show that Louisville must get serious about designing better arterial streets that serve all residents of the city. The current pattern of building superhighways has not reduced congestion and has only served to increase the danger on our streets for all users.