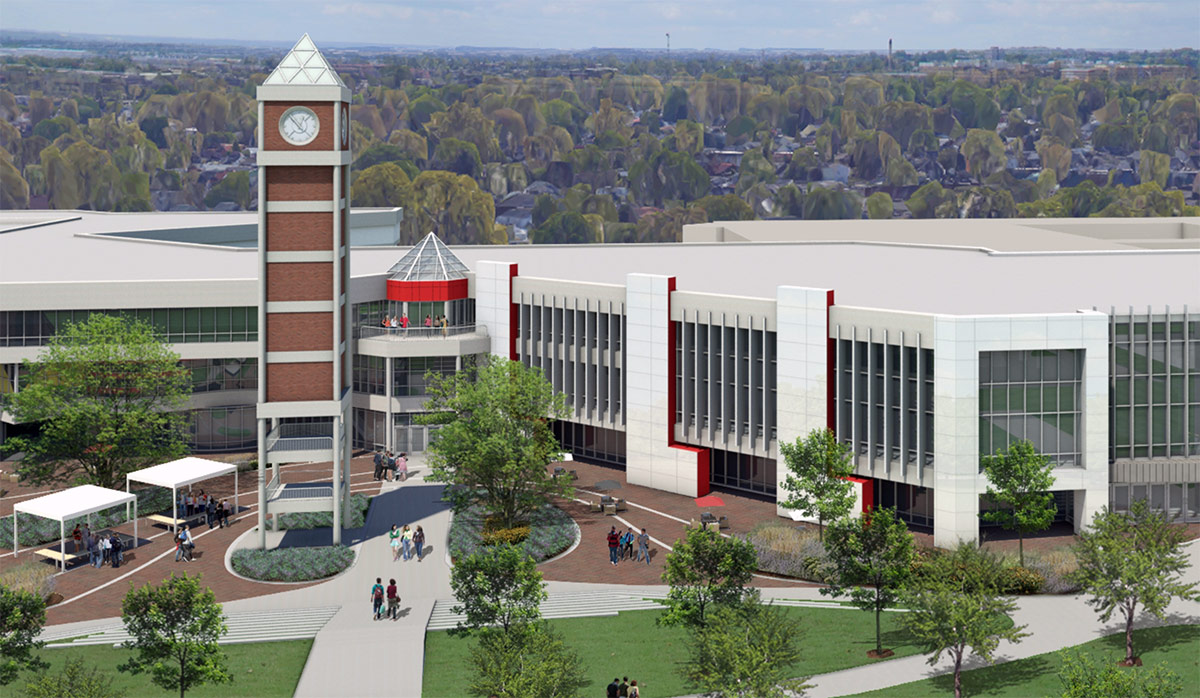 A hulking mass of late-Brutalist architecture at the University of Louisville’s Belknap Campus straddles a pair of railroad tracks and forms the heart of student life on campus. Marked by the university’s iconic clock tower, the Student Activities Center (SAC) has changed little since it opened in 1990, but newly approved plans will give the structure a welcome $40 million update.

On October 8, the U of L Board of Trustees approved the renovation that will add nearly 33,000 square feet to the 25-year-old structure and refresh its exterior.

The renovation project is being designed by St. Louis–based Hastings + Chivetta Architecture and Lexington’s Sherman Carter Barnhart Architects. Renderings released last week show a lightening up of the heavy structure with plentiful glass and new window treatments that include wavy glass and vertical fins.

Among the most visible changes will be the removal of an enormous ramp leading to a second-floor entry. Although an architecturally interesting gesture, today, that ramp forms a sort of tongue lolling out of the building that hinders pedestrian flow and cuts campus green space in two. A new plaza is depicted with shade shelters and a sinuous paving pattern. The softened plaza, showing scattered tables, chairs, and umbrellas, appears more like a lively urban space that fosters lingering rather than just passing through.

The building’s western facade is visually broken into two masses (above). On the north side, the building’s existing horizontal lines remain and the waves in the ground plane are reflected on undulating window glazing on the building itself. Enormous windows on the southern half of the building are shown with vertical fins that stress the height of the structure here, giving it a monumental scale despite having an identical height. Removing the ramp allows the plaza to be expanded to this side of the SAC.

While the building’s main campus-side entrance shows a distinctly modern design, renderings of the east facade show a traditional addition for a new campus bookstore including brick, trellises, and columns. The SAC’s outward-facing facades have historically turned their back to Floyd Street and Cardinal Boulevard with blank walls of brick and concrete, but the new bookstore attempts to open up this facade and create a storefront appearance for the building. More of this treatment would go a long way toward opening up the building to its surrounding neighborhood.

Finally, the southern side of the building is expanded south, replacing a small one-story structure. A new colorful stairway entrance is shown.

Inside, plans call for overhauling the campus bookstore, lobbies, lounges, and restaurants in addition to updating the building’s core infrastructure and removing interior escalators. (One day, we’d love to see this building house a light rail station connecting the university with the core city.)

Work on the Student Activity Center overhaul is expected to begin in the Spring of 2016 and be complete by January 2018. The university will pay for the project through private sources, faculty funds, and a $9.6 million bond funded by student activity fees, according to a press release.