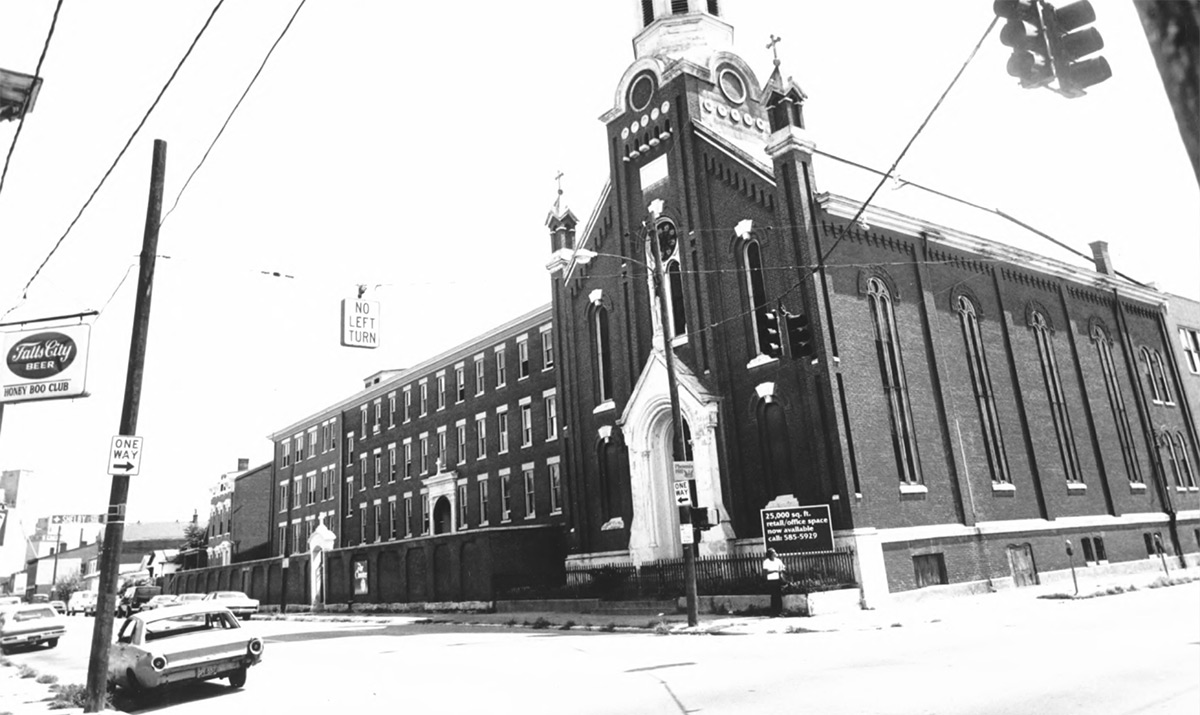 “It’s amazing how much people know about it,” Marty Goldin said of a long-abandoned church on the corner of Chestnut Street and Shelby Street in Phoenix Hill. He was referring to the former Ursuline Academy of the Immaculate Conception, which used the chapel and the adjacent property now known at the Cloister Apartments as its convent and school. You might know the building because of the Ursuline Sisters who built it 150 years ago. They later moved on to build Sacred Heart Academy on Lexington Road. This little church has a lot of built-in memory.

That heritage enticed Goldin, a Brooklyn-based developer who recently purchased the building and plans to restore it. “It will look the same but better,” Goldin told Broken Sidewalk, quipping that the best preservation projects require millions of dollars to keep things the same. He should know, as his offices are located in the historic Montauk Club building in Park Slope, Brooklyn overlooking Grand Army Plaza and Olmsted’s Prospect Park beyond. He is currently involved with renovations to the building to keep up its ornate appearance based upon Palazzo Ducale (aka Doge’s Palace) in Venice, Italy. You might have seen it on HBO’s Boardwalk Empire. He is also in the process of converting an old mill building in Connecticut into artisanal studio space called the Mad River Lofts.

Goldin and his business partner have been purchasing distressed properties across the country since the recession. The duo has properties in Lexington and Louisville. Last August, they purchased The Cloisters, and later Goldin stepped up to take the next-door church. He saw the potential in the building’s historic bones. “Louisville just doesn’t seem to respect historic buildings as much [as New York]”, he said. Goldin lives in a Landmark building in Park Slope and enjoys working with historic urban fabric.

Part of his interest in preservation stems from Brooklyn itself. “People love Nulu, but it’s like three blocks of Brooklyn,” he said. “They tore down all the old buildings.” Goldin knows those old buildings are what gives a place character. “When you see Garage Bar, people love those funky things like glow in the dark ping pong tables.” He sees the chapel and the Cloisters as an investment in stimulating the economic development of Phoenix Hill, not just as individual real estate investments.

Goldin called Mitchell Kersting of WorK Architecture + Design to help restore the building, which will undergo initial stabilization this fall. “We want it done before winter to prevent further damage,” Kersting said. Work will include sealing up a leaky roof, restoring the steeple, replacing the windows, and caring for the brick, all according to the Secretary of the Interior’s Standards for Rehabilitation of Historic Properties. Following those standards keeps historic tax credits on the table for the full renovation.

“It’s a shame it has been left in this level of disrepair,” Kersting said, noting that much of the original detail on the inside has been lost. The chapel was built in 1867–1868 and listed on the National Register of Historic Places in 1977. It was designed by Cincinnati architect John Bast in the Romanesque-Revival style typified by its rounded arches. A renovation in 1900 added electricity to the chapel.

According to research submitted with the National Register:

Constructed of dark red brick with limestone trim, it is in the Romanesque Revival style with typical round-arch forms and brick corbelling. The large scale entry of white-painted stone is topped by a cross and has recessed double doors of dark-stained wood. The central tower portion of the facade contains a double window with round-arched top surmounted by a stained glass rose window. Other windows contain stained glass, some original and some dating from a 1900 renovation of the Chapel. The tower is topped by an octagonal spire. The vari-colored diapering pattern of the roof is still visible.

Next to the chapel stood the original 1859 convent, which was demolished in 1899 to make way for construction of the Cloisters the following year.

On the inside, detailed (and quite graphic) murals by artist Johann Schmitt were painted between 1868 and 1872. A restaurant called Raposo’s that briefly operated in the building in the late 1970s is believed to have painted over portions of them.

Later, the church housed the Louisville School of Art and Temple Beth Shalom (which explains the Star of David painted on the steeple). A drop-ceiling was installed in the sanctuary, concealing its dramatic barrel-vaulted ceiling. In the late 1980s, the building was damaged by fire, and in 2008 the building suffered more damage during a major wind storm.

“It’s almost to a point of [complete] disrepair,” Kersting said. He said a portion of the altar remains and a 20-foot dome exists inside the steeple. The bones are still good. “There’s highly skilled timber construction here,” Kersting said, doting on the detailed joinery in the building’s framing.

Goldin plans on a modern office concept for the building. He said the idea floats between a co-working space and traditional office space and will be geared toward startups. “We want to take advantage of the church itself in the design,” Goldin said. “You’ll be able to go where you normally can’t—behind the altar, into the steeple.” Goldin said he is still determining the scope of the project and refining the concept.