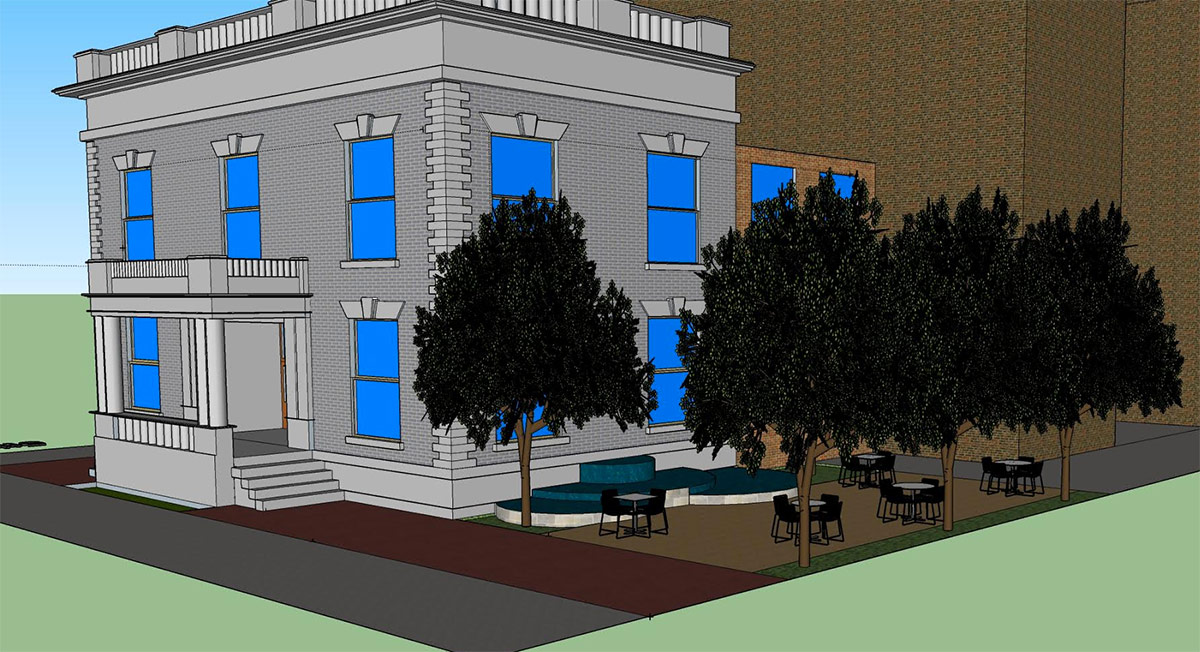 As I write these words, the historic Water Company Building is breathing its last under the weight of the wrecking ball. The landmark-yet-unlandmarked building, whose simple-yet-grand facade has graced South Third Street for well over 100 years, is meeting its end as the result of a controversial (which is putting it lightly) process that has pushed it aside in favor of the monumental Omni Hotel Complex.

But I am not going write about the trials and tribulations that led to the Water Company Building’s demise; that part of the story has already been covered extensively by authors far more talented than I. Instead, I am going to write about the future of the WaCo Building (a name I prefer, as it nicely sums up this entire situation), however dim it may seem at present.

As part of a compromise (as insulting as it may be to use the word to describe the end result) with those interested in seeing the historic structure preserved, Metro Louisville agreed to dismantle and store the stone portico, front facade, and 30 feet of the building’s sidewalls. So, while it will essentially cease to exist as an actual building, its grand shell will partially remain, ready to serve a new purpose.

Therefore, the battle to keep the memory of the Water Company Building has not entirely been lost; instead, it has changed form. Now, we must fight to ensure what remains, the portico and facade, is properly resurrected, instead of rotting away on some grassy back lot like so many other buildings that have been “stored.”

Once the building is dismantled, Metro Louisville will be accepting ideas for its reuse over the next 12–18 months. What follows is one such proposal.

There will undoubtedly be ideas for art pieces and sculpture gardens crafted from the WaCo Building’s remains—they should be promptly rejected. We should accept nothing less than the incorporation of the entire facade into a new building or development, so that it may at least appear to exist as it once did. Anything less would be insulting to the building’s memory.

Where should such a development go? Downtown Louisville, with its acres of surface parking, has many options to choose from. I have decided to rebuild the Water Company Building on one lot in particular: the small surface lot at the northeast corner of Fifth Street and Chestnut Street, adjacent to the popular cocktail bar, Meta.

I have chosen this location for several reasons. First, the 65-foot-wide facade fits within the 86-foot-wide parcel nicely, and would create a solid corner anchor in a part of downtown that is desperately lacking any kind of proper street wall.

The area around the intersection of Fifth and Chestnut is populated with a scattering of small historic buildings, which match well with the Water Company Building’s scale.

Placing the facade here would also enable the new development to build on the already substantial investments being made one block east, in the heart of the South Fourth Street Retail District.

According to LOJIC, the surface lot is actually split into two parcels. Added together, they create a lot that measures 86 feet by 128 feet. That size lot can easily accommodate the facade and 30 feet of sidewalls, with plenty of room left over for additional buildings and uses.

Additionally, the Downtown Form District has no required parking minimums (though, with the ocean of surface parking and massive 4th Street Live! parking garage just steps away, there is really no need for any). This means that the lot’s footprint can be fully built out, to maximize its urban quality and its economic productivity/profitability.

With these and other environmental factors in mind, I created these renderings demonstrating a conceptual site development. The Water Company Building facade becomes the centerpiece of a mixed-use infill development, replacing an empty parking lot with offices, restaurant/retail, and apartments.

The WaCo Building facade and sidewalls, the star of the show, prominently occupies the corner of the lot; it brings urban definition and architecture richness to an intersection that is sorely in need of both. The rebuilt facade could house a number of uses, from restaurant to retail to office space.

The Fifth Street side is anchored by a five-story apartment building, built in a simple Art-Deco style. This was done to match the general character of this block of Fifth Street—residential buildings of various sizes occupy the few lots that aren’t surface parking.

The remaining space between the WaCo building and apartment building is filled in by a small, traditionally designed commercial building. It could also contain a mix of uses, with retail on the ground floor and office or additional apartments above.

Finally, placing the rebuilt facade right on the corner leaves about 30 feet of space between it and the existing Meta building. There is a chance it might have to be left as open pavement to provide access to the rear of the new buildings for emergency vehicles. But in a more ideal world, the space is perfectly suited to become an intimate pocket park, with trees, outdoor seating (both for the general public and any adjacent bars or restaurants), and a small water feature. This pocket park could also function as a rain garden, treating stormwater runoff from the new buildings and nearby surface lots.

This proposal is advantageous for many reasons, in addition to bringing the WaCo Building back from the grave. It starts rebuilding a clear urban streetwall on a street where it has been seriously eroded; it brings new residents and activities to a pretty dead part of downtown; it introduces new examples of Louisville historic vernacular architecture. Overall, it represents a more unique, more holistic, and more locally oriented way to build infill development projects in Louisville.

Of course, this isn’t the only possible way to reuse the Water Company facade. As I mentioned previously, Downtown Louisville is riddled with vacant parcels that need filling. But it is advantageous to have something concrete to focus the discussion on this important topic, so that we may identify any challenges.

To be fair, there are several significant challenges to making a proposal like this a reality. The fact that the parcels are privately owned represents a significant hurdle. The owner would have to be talked out of a money-producing asset in order for construction to be even a remote possibility. But the biggest hurdle is, of course, money.

Building the proposed structure would be a very expensive undertaking. The empty lots by themselves have an assessed value of $466,780. Additionally, it has been stated several times by multiple sources that incorporating a historic facade into a new building is more expensive than an average development project. As a result, it’s fairly certain that any effort to bring back the WaCo Building would be a civically minded labor of love, rather than a purely profit-driven venture.

But a civically minded labor of love is absolutely a possibility. It is an act that the City of Louisville and its people are most certainly capable of, though it rarely involves a building. As an example, one only has to look to Main Street, to Whiskey Row. On the cusp of becoming just like the Water Company Building, the block of 150-year-old warehouses were spared by a coalition of preservation-minded interests that continue to fight to see them brought back to life, come hell or high water (literally). A similar alliance will have to be formed to see the Water Company Building returned to the streets of Louisville.

Of course, there will be those who say, “What’s the point?” “Why even try, given all that has happened?” We simply cannot allow those kinds of statements to dominate the conversation. The recent discovery of the fate of another “stored” building, the Board of Trade, is a frightening illustration of what happens if we do nothing.

With the right people and the right resources, it can continue to be a part of Louisville’s Downtown built landscape. All of the pieces are there. We just have to figure out how to make them fit.