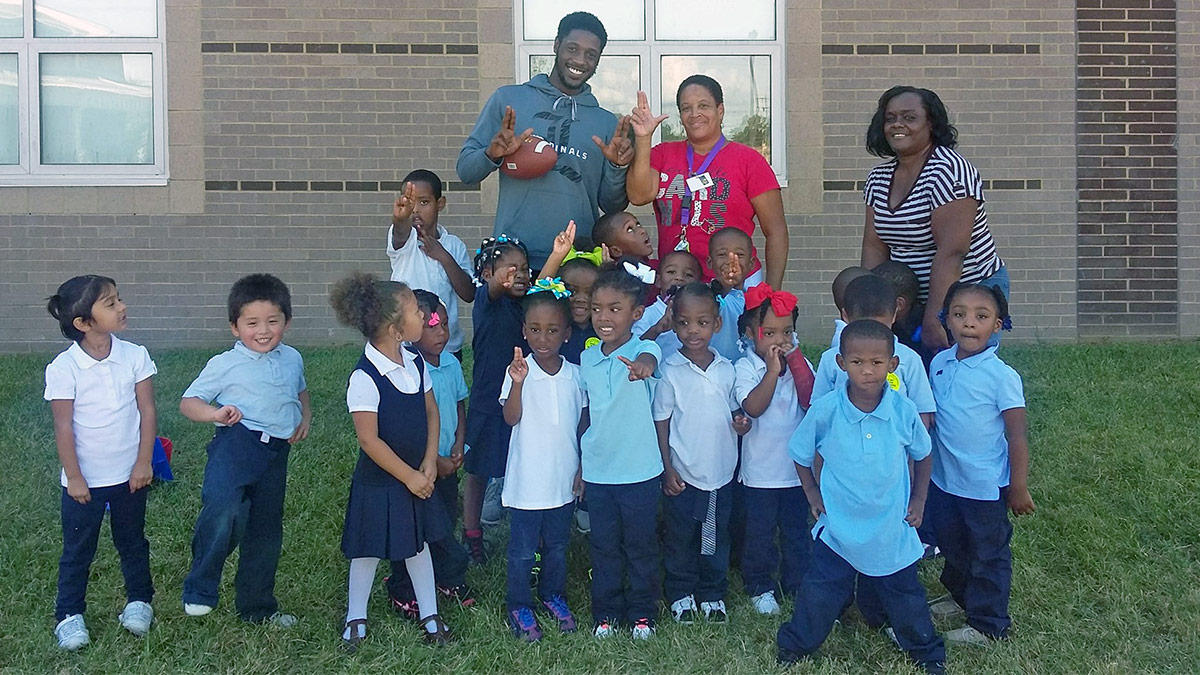 Pamela Sutton is a Early Childhood instructional assistant in the Head Start program at Louisville’s McFerran Elementary School. Every day she either walks or pedals her bike from her home in Shively to school in the Algonquin neighborhood, a habit she picked up six years ago. Sutton leads her school’s walking club, the One Mile Walkers Club, and tries to relay the health benefits of active lifestyles to her students, whether it’s walking to school or for errands or just for fun.

Earlier this year, Sutton connected with a national walking group, America Walks, which hosts the National Walking Summit, a gathering of walking leaders from across the country. She is one of 25 Fellows of the nonprofit’s Walking College, “a structured, distance-education program of self-study, mentored instruction, and team problem-solving” covering everything from building a walking movement to understanding the built environment.

On October 28–30, Sutton will be representing Louisville in the National Walking Summit in Washington, D.C. (You can support her trip here.) We spoke with her to learn about her work promoting walking, how she sees Louisville improving, and what the Walking College means for her and the city.

Broken Sidewalk: How did you get involved with the Walking College?

Pamela Sutton: What brought the Walking College to my attention is what I was doing here at school in my classroom—I started a program to help fight against childhood obesity. Every day the kids walk with a pedometer, counting their steps, learning how to read larger numbers, and incorporating more physical fitness out in the field. Instead of just having them run around and play, we create specific activities and rewards for participating.

I’ve been doing this about six years through the Mayor’s Healthy Hometown program in the Health Department. They’ve helped me out a lot. I get a lot of people in from the community to walk with the kids, talk with them about walking, how it will affect them when they’re older. It’s been pretty great.

I heard about the Walking College on Facebook, but I just didn’t think that I could even do that because I thought I had to be a corporation or belong to a walking group. Jackie Harris at the Health Department told me to go ahead and try it. That’s how I got into that.

I’ve learned a lot from it, which is what I wanted. I wanted to bring everything that I learned back to school and hopefully back into the community.

So walking for you is really a health issue? Yes, in 2009 I was diagnosed with borderline diabetes. I needed to find a way to make sure that never happened. So my husband and I, we just started eating healthy—cutting out unhealthy food—and walking. Walking has helped us both out a lot. We’ve cut off 40 or 50 pounds each in that six years. We do any kind of charitable walk, we hike, and then we started biking.

I do this for health issues—to keep myself healthy and fit. I had a van. I sold my van so I either walk or bike to work every day. I’ve been doing that for the past six years.

I enjoy what I’m doing. I really enjoy working with kids in the childhood obesity movement program. Hopefully what I’m doing will go through the school system so others can jump on board and bring in what they think will benefit their classrooms and their families. Because it works.

Once you start you stick with it. It’s not a chore, it’s a fun activity. The kids, they love it. They don’t get as much recess as I did when I was growing up—they go from home to daycare to school to daycare to home, and they don’t get out there and do anything. I’m trying to get them to get out there and do something. Get outside and enjoy this fresh air. We go out and talk about everything and learn from it—we talk about nature, about colors.

What are you learning through the Walking College?

I volunteer a lot, such as the Mayor’s Hike, Bike, & Paddle—I do that twice a year—so what’s mostly attracted my attention is we’ve been able to be a part of a community. As far as community, we have a voice. I’m part of the community and if I feel like something needs to be taken care of then I have a voice and can be heard. I am able to voice my opinions.

It’s also allowed me to see how policies are made. How they decide on which area might need biking paths or walking paths, or which area needs more added to it. Things like that. Who makes the decisions.

This month, you’ll be implementing an independent study project, right? Yes. My plan is on October 23 to do a parent–child community involvement cleanup program where we walk around the school—inside and outside—and walk around the area. October is Walktober, just like September is Childhood Obesity Month. We’re trying to get people to be more active.

I’m doing this with Operation Brightside. I do believe the health team from GE will be volunteering with us, too. Along with that I’m trying to get the Health Department to come out and do a health fair. But my main focus is on walking. The kids will learn about eating, walking, and getting out. Walking in the fall helps them get prepared to do walks in the upcoming spring.

Are you going to the National Walking Summit this year?

Yes. I’m leaving for D.C. on the 27th. I’m doing it and I’m pretty excited about it. I always wanted to do it. I’m excited that I can go and find new things to bring back and share. To find out what other cities are doing, because they’re doing so much to be active. How has walking and biking changed in Louisville since you’ve been walking every day? Are more people out walking with you?

Oh, gosh yes. This is the 22nd year for the Hike, Bike, & Paddle. I’ve been doing it for the past 8 or 9 years and it’s grown a lot. Even when it rains we still have a crowd. I see people out not just at the Hike, Bike, & Paddle, but just on their own. They’re out at the parks. People come up with their own groups and do fitness as groups. The Big Four Bridge has really brought a lot of people Downtown and introduced them to walking. That was a big success.

With the Mayor’s Office, just getting the information out on being a healthy city. I keep information up in the hallway at school. When people find out about something they usually want to keep up. You can’t force it on people, but if you put the information out there they’ll come up to you and want to learn more.

What challenges in Louisville would you like to see addressed?

In certain areas, like where I live at in Shively, there aren’t many sidewalks. It’s a lot of grassy areas where there’s not enough space to walk between the grass and the street. It’s like you’re just squeezed in, walkers and bikers.

Once you get south of Broadway, it’s just not really as safe—debris wise, potholes. It’s like that in the West End, there’s not much. Like at Algonquin and Shawnee Park, you want to walk the river from Broadway on downtown, but you can’t because it’s blocked off. And it’s been blocked off for so long. The city needs to work in all areas as quickly as possible instead of trying to open up something new. You’ve got to fix what’s there first.