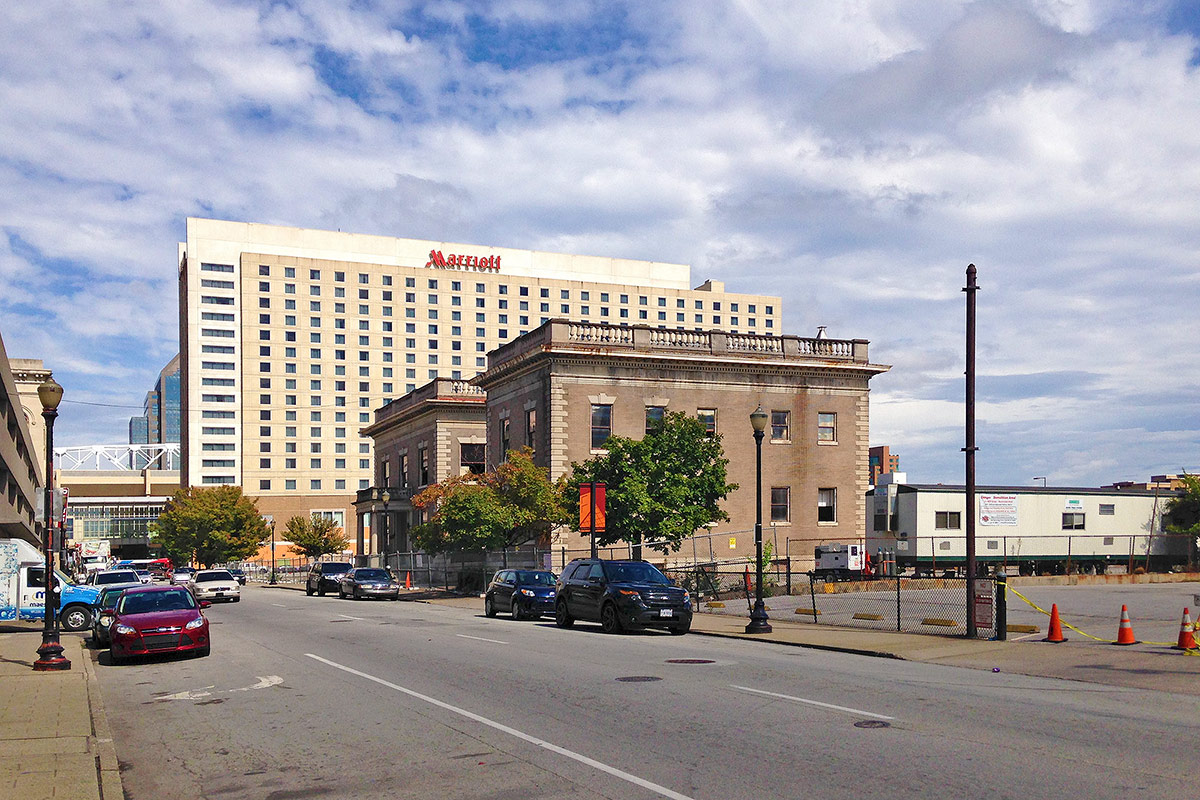 After three hours of public input and deliberation, the commission ultimately voted six against and three in favor of the landmarks designation. Opinions of committee members ran the gamut of opinions from those in favor of landmarking to those who felt the petition drive was an abuse of the committee’s power to those who favored the economic impact of the development over preservation. The Courier-Journal‘s Martha Elson has a nice wrap-up of several committee members’ reactions during the meeting.

Architect Scott Kremer, a former landmarks committee member, spoke during public comment, according to Elson, and noted that declaring the building a landmark might not even be enough to save it. He cited the case of the Bauer’s Building on Brownsboro Road that was landmarked and still demolished for a new development.

Kremer vocally opposed approval of the Omni this summer and demolition of the Water Company Buildings for a parking garage as part of his role on the Downtown Development Review Overlay (DDRO) committee. Mayor Greg Fischer removed him from his post on the landmarks commission last month. City officials cited efforts to improve the diversity of the committee as an impetus.

Given the late point in the process and the politicization of the entire Omni project, it was unlikely that the buildings would be declared local landmarks from the outset. Damage to the city-owned buildings due to years of neglect had taken their toll with rapid deterioration stemming from a leaking roof taking place this year. Sources told Broken Sidewalk this summer that asbestos removal crews had badly damaged the interior including the structure mosaic floors and mahogany paneling. On a recent site visit in early October, windows in the buildings were observed to be left completely open or broken, allowing additional water inside the structure. Martina Kunnecke, NPP’s president, told Elson that “we expected this outcome.”

Multiple sources told Broken Sidewalk this summer that the city’s lack of maintenance of the buildings would have made a restoration project difficult or impossible by jeopardizing historic tax credits available to help fund a renovation or move for the building to a different site.

A charrette was convened in June to study moving all or part of the building to a nearby site. Several proposals were submitted to Mayor Fischer, who had promised $1 million in city funding for such a move, but he ultimately denied all the citizen-led proposals as unfeasible.

Demolition permits were filed in August, but work was not allowed to proceed until September 6 because of the building’s age and historic quality. NPP’s petition was filed two days before that deadline.

Demolition work had already begun on two, three-story buildings dating to 1916 at the Water Company site. Those buildings were deemed as non-contributing by a third-party study years ago. The two street-facing buildings, the 1910 main building and a 1914 addition, were the subject of NPP’s petition.

Previously, two other historic structures were demolished under an emergency demolition permit, which bypasses the city’s preservation laws. Many had criticized that move as a political one rather than a concern for public safety.

The city now plans to salvage prominent architectural elements from the front facade and partial sidewalls of the building and place them in storage. As we reported last month, the city has a poor track record for recovering building facades or components that have gone into storage, many of which have been sitting in parking lots for decades.

The denial of the landmarks permit means demolition work can proceed at the site. The city must deliver a cleared site to Omni by January 1 or the development deal could be thrown into jeopardy, but with this last hurdle cleared, the city appears likely to meet that deadline.