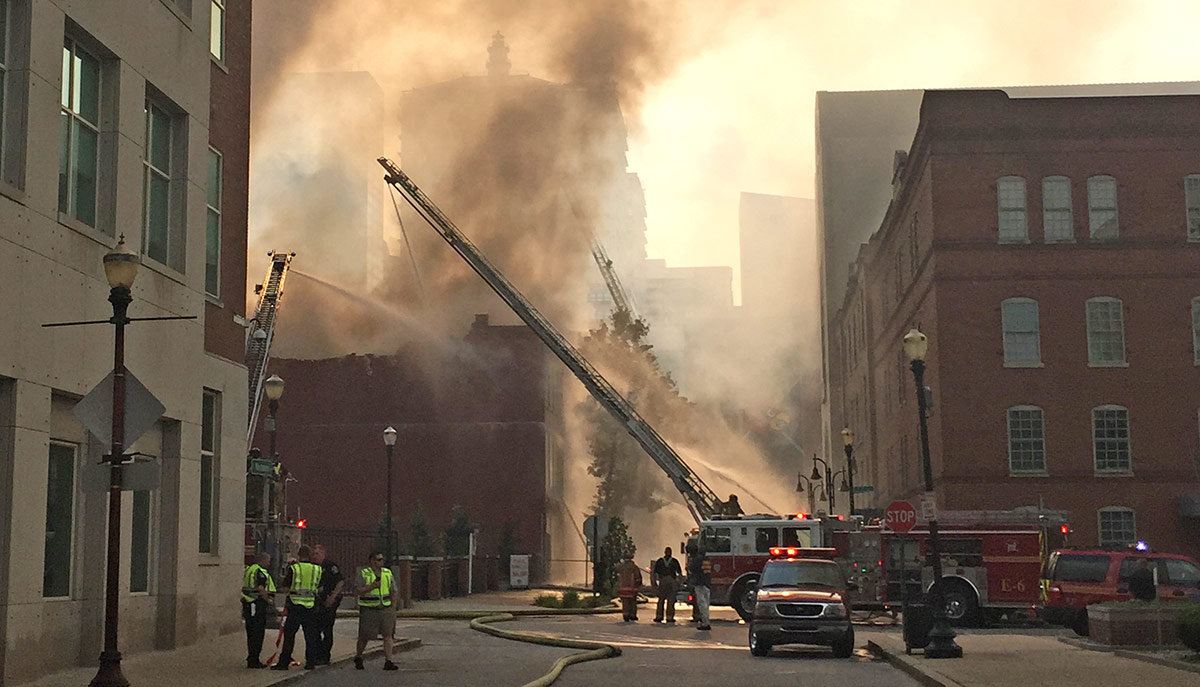 The city of Louisville collectively held its breath Monday afternoon and into the night as more than 80 firefighters battled to extinguish a major three-alarm fire on Whiskey Row. Despite a partial collapse of one of the building’s party walls into a parking lot, the West Main Street structures made it through the blaze—and thankfully no one was injured in the process.

These buildings, dating as far back as the Civil War era, have been part of a long preservation battle, with multiple demolition threats mounted over the years. A development team consisting of Craig Greenberg, Valle Jones, and Brown-Forman Corporation stepped in to save them at great expense, marking a high-profile preservation victory for the city. Before this week’s fire, the group had already stabilized several structures and shored up facades where the structural integrity was lost.

Development plans include a major bourbon distillery for Brown Forman’s Old Forester brand in two of the buildings at 117–119 West Main Street and a mix of restaurants, retail, and offices in three more structures at 111–115 West Main Street. Construction had just begun on the project—crews were on site the day before the fire, according to several news reports—and the distillery was scheduled to get underway this summer.

“[Monday’s] fire at 111 Main Street on Whiskey Row was an unfortunate setback for the revitalization of West Main Street, but it will not stop our group’s efforts to preserve and restore this historic block,” development partner Craig Greenberg said in a statement on Tuesday. “We are very appreciative of the overwhelming support from the community—it demonstrates Louisville’s strong interest in our history and our historic buildings.”

Greenberg said structural engineers are currently inspecting the buildings to figure out how to proceed. The Louisville Fire Department is also investigating the cause of the fire and Greenberg said his group will issue an update later this week when more information is available.

In a letter to employees published by WDRB, Brown-Forman said plans for the distillery and visitors center are still going to happen:

As far as we know this morning, our Old Forester Distillery buildings suffered little damage. However, we will need to get structural engineers to inspect them before we can be assured of their exact condition. At this point, however, our plans remain unchanged and we will continue with preliminary work and hold a ground-breaking ceremony later this summer and begin construction on the project. The timing of that event could change based on the condition of both our buildings and the three other buildings involved in the fire, but as of now we do not know of any reasons to change our plans to develop the Old Forester Distillery on Whiskey Row.

“The preservation of our historic structures in our community and elsewhere is vitally important to us, as they reflect the unique character and history of a place,” the Brown-Forman letter continued. So Brown-Forman and Main Street Revitalization join with preservationists everywhere in lamenting the serious damage done to the three historic buildings on Louisville’s Whiskey Row.”

We’re thankful that the Louisville Division of Fire was able to expertly extinguish the fire and that developers and city leaders remain committed to rebuilding this significant corner of Louisville’s Main Street. Whiskey Row has played a significant role in the early development of the city, and despite numerous setbacks and decay in decades past, the block will help shape the future Louisville in just as significant a manner for decades to come.

For more information on the history of the Whiskey Row deal and the fire, read Stephen George’s thorough article at Insider Louisville or listen to commentary and history from former Courier-Journal editorial page editor Keith Runyon at WFPL.