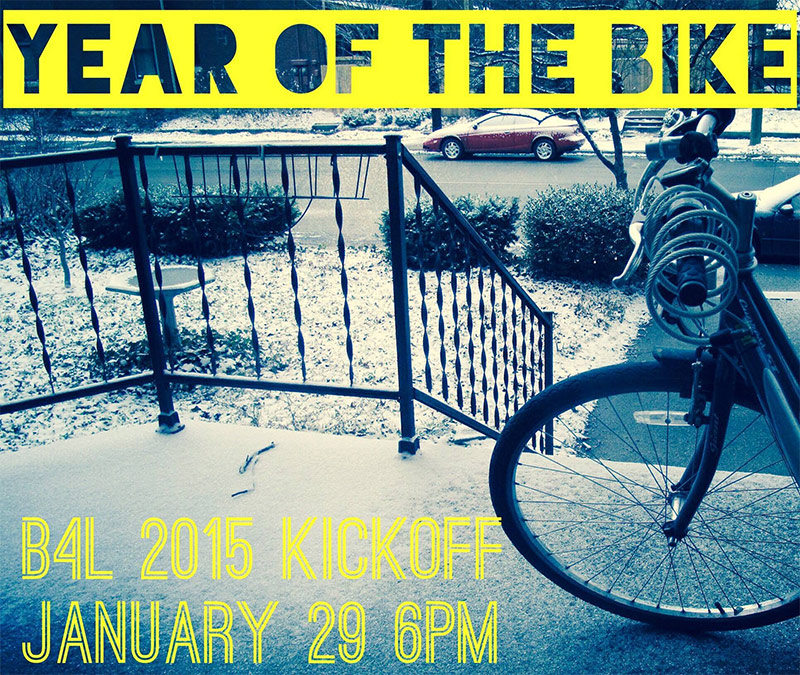 Louisville made a lot of progress toward making the city more bikeable in 2014. A lot of that success is due to the hard work of the city’s top advocacy group, Bicycling for Louisville (B4L). According to the group, last year, Louisville added 40 miles of bikeways and 22 miles of neighborways received sharrows with another 60 miles proposed.

That’s progress, but there’s a lot left to be done. And even bigger projects will be decided this year. For instance, a road diet on Lexington Road could bring the city’s first cycletrack (more on that soon), a bike share system could come online (tell the city where you want bike stations here), and miles more bike lanes are in the works. 2015 is shaping up to be the #YearOfTheBike.

In just a couple weeks, B4L will be kicking off 2015 with a #YearOfTheBike fête on Thursday, January 29 at the St. John Nulu Theater (629 East Market Street), and you’re invited. Rub shoulders with Mayor Greg Fischer and let the city’s cycling agency, Bike Louisville, know about your ideas and priorities for 2015. Here’s the official event roster from B4L:

We’ll have presentations from city engineers on upcoming bike projects! …beer! …music! …a speech from the Mayor! …a raffle for a free bike! …as well as bike shops, bike groups, neighborhood groups, parks groups, and city officials in attendance talking about what they’re doing to make 2015 the #YearOfTheBike!

Last year, 51 new members signed up to support biking in Louisville by joining B4L. Let’s double that number this year and show the city we’re really ready for the #YearOfTheBike. The event takes place Thursday, January 29 at 6:00p.m, so mark your calendars now. More info about the event on its Facebook page.