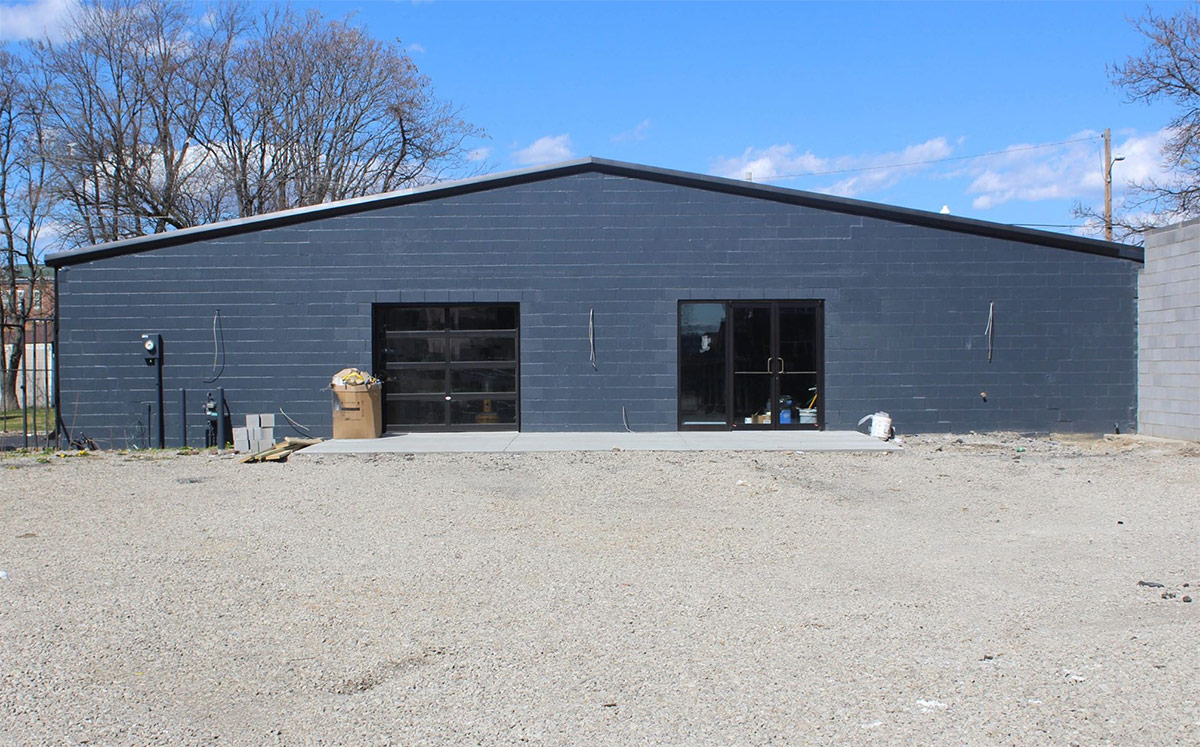 If you walk along West Main Street, you might not have ever noticed a humble concrete block warehouse set way back off the street behind a chain-link and barbed-wire fence. Located between 16th and 17th streets, the space was used for little more than storage. But in just a couple weeks, it will be hard not to see how that warehouse is making an impact in tearing down the Ninth Street Divide.

“I moved back from Chicago to Louisville, and I realized how segregated our city still it,” Kara Nichols told Broken Sidewalk. “It was hard for me to be in that environment. It just felt so uncomfortable to me.”

Nichols is transforming the structure at 1619 West Main Street into a hybrid gallery and social activism space called 1619 Flux: Art + Activism, and a grand opening is scheduled for April 15, where an expected 500–800 people will fill the gallery and its front courtyard.

The grand opening takes place on April 15 from 6:00–10:00p.m. The event is free and open to the public, and Nichols said she hopes to see people from all walks of life. Food from multiple vendors will be available.

Among the events, a exhibit of work by renowned glass artist Stephen Rolfe Powell will be displayed alongside artists whose work has never been in a gallery. A six-person “integrated jazz band” will be on hand and Theater502 will also give a performance.

After attending a meeting looking for ways to bridge the Ninth Street Divide, Nichols wanted to create a long-term space for discussion around the issue beyond just a single event. “I was trying to find sustainable ways people could integrate and come together in the city,” she said.

“It’s not just a gallery,” Nichols said. “We see it as a space for social activism.” She said events could range from curated shows to spoken-word poetry to a variety of events in the courtyard and other non-traditional art. “I don’t want it to get pigeon-holed as an art gallery, because we’re not just an art gallery,” she added. “There’s a very strong activism piece to it.”

Nichols sees the space as pairing people together from different backgrounds—socio-economic, racial, or geographic. She often takes walks around the Russell neighborhood, talking with people along the way about art and activism. First and foremost, she said 1619 Flux will take a neighborhood-centric approach. “We’re trying to make it primarily for the people in the neighborhood, and see what the neighborhood needs,” she said.

Nichols is working with artistic director Jesse Levesque on the project. Levesque is producing the very first BKind Festival, celebrating Louisville’s status as a compassionate city. Taking place in April, the festival will feature events at Waterfront Park, the Muhammad Ali Center, and 1619 Flux, among others.

As part of the BKind Festival, Nichols said a light display by artists Tiffany Carbonneau and Susanna Crum will be projected against a wall in 1619 Flux’s courtyard.

Nichols has already made a number of connections in the community, including hosting events at nearby Joe’s Palm Room, a nightclub dating to the ’50s at 18th and Jefferson, and Sweet Peaches restaurant at 18th and Muhammad Ali Boulevard. She is also working with Lance Newman, aka MrSpreadLove, who performs spoken work poetry. Newman also works with Roots & Wings through the nonprofit IDEAS.

Nichols said another partnership with the Fund for the Arts and the city’s Commission on Public Art will help mentor and fund public art just for West Louisville. Each year, a different artist will be selected and his or her piece funded and displayed.

“Everybody is focused on Portland, so I was very adamant on focusing on another part of West Louisville, like Russell,” Nichols said. After looking around for a suitable space, she eventually landed at 1619 West Main—the border between Portland and Russell—will help from Gant Hill & Associates. The property was previously owned by Bryan Holden, a metalwork sculptor who maintains a live-work studio space next door in a historic fire station.

“It’s on the border of Russell and Portland, so I think that’s a good place to start,” she said.

“We had this gigantic warehouse that was pretty bland architecturally,” Kersting said of the steel and concrete block structure. “It was just being used for storage.” Because of its utilitarian past life, new electrical, HVAC, and plumbing systems had to be added.

The warehouse space was kept open and flexible, Kersting said, with offices, conference rooms, and a kitchen around the perimeter, and a stage for performances. “We let the building do what it needed to do,” Kersting said. New openings were cut into the concrete block facade to allow more natural light into the space and the front facade has been painted black, giving it a clean appearance. Concrete floors have also been polished.

On the inside, Kersting offset new walls at a slight angle to contrast with the rigid structural grid of columns. That diagonal theme is carried out into the courtyard, blending interior and exterior.

“We turned what was an unnoticeable storage building set off the street into something that engages with the community,” Kersting added. He said the most noticeable change will be the removal of the chain link and barbed wire. “Psychologically, it was telling the community to stay out,” he said. New custom planters fabricated by Jeremy Semones of Core Design will line the sidewalk, demarking the property line.

The front gravel courtyard is large enough to handle all the site’s parking needs while also leaving room for event space and a large fire pit, also designed by Core Design. Grass will be added in certain areas and the space will take on a sort of patio feel. “It’s an opportunity for the community to gather,” Kersting said. “The courtyard will be the hearth of the building.”

As Nichols pointed out, 1619 Flux pushes the boundaries of what’s happening in Portland closer to the core of Russell. But the site is well positioned to build on the arts momentum happening all around. The space backs up to the University of Louisville’s planned home for its Masters of Fine Arts program on Rowan Street, also designed by WorK.