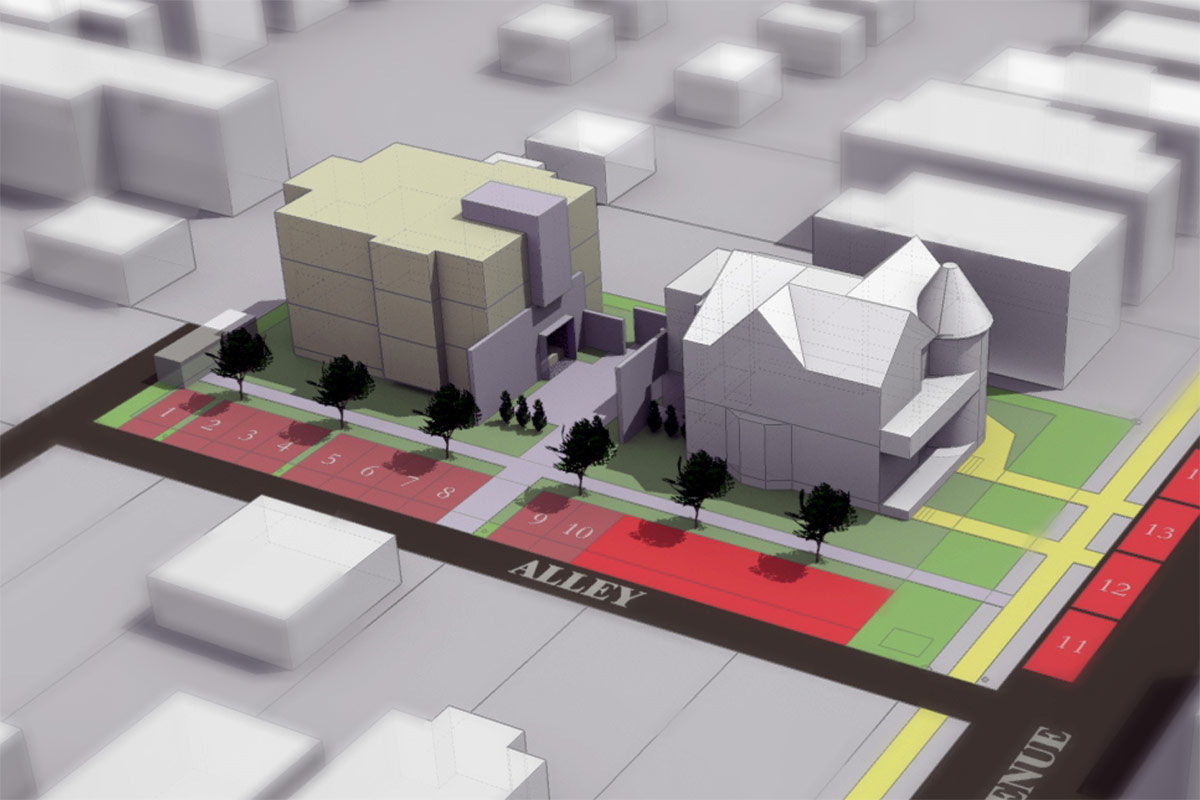 Sometimes you’ve got to get creative when developing in the Highlands. That’s the idea behind a proposal for five new apartments in a three story structure just off Murray Avenue and Bardstown Road in the Bonnycastle neighborhood.

Aaron Tasman of Tasman Properties Group is acting as the developer of the project on behalf of property owner William A. Reisert IV, of Reisert Insurance. Tasman’s company has developed a number of properties around Louisville, most notably the Butchertown Pointe complex on Washington Street.

“I’m acting as developer,” Tasman told Broken Sidewalk in a recent phone interview. “The people that own it—their grandfather bought it—have been there forever. This guy wants me to build a structure that his grandkids will own. You can’t cut corners if you’re looking for a long term ownership.”

It’s at Butchertown Pointe, 1205 East Washington Street (Suite 112), on Thursday, July 21 at 6:00p.m., that Tasman will host a neighborhood meeting about the 2019 Murray Avenue project.

Today, 2019 Murray Avenue stands tall with a prominent tower as the first house on the north side of the street. Tasman said the historic Victorian was recently renovated to include sprinklers and generally bring it up to code.

Around back is an unkempt and generally unused yard facing the intersection of two alleys, one accessing businesses along Bardstown and the other houses and apartment buildings.

Tasman is seeking a rezoning of the site’s current R5A status to the higher density R7 to accommodate the new three-story, 6,800-square-foot building on the .4-acre site. That would mean that the current four units in the three-story house could be upped to a total of ten under the new designation, even though the proposal is for only five new units.

Plans for the rezoning have already been submitted to Metro Louisville Planning & Design for review (Case Number 15Zone1032), but an official design for the building has not yet been drawn up. A year ago, before Tasman signed on to the project, Louisville-based Pickett Passafiume Architects put together some massing and circulation diagrams to show how a development might look on the Murray Avenue site. They’re not intended to show a final design, nor much of any design at all, but they do show site interactions.

Nick Passafiume, the architect who studied the site massing, said the new building would be of similar size to the old house. “The desire was to add four rental units and a penthouse suite on the top floor,” Passafiume told Broken Sidewalk. “To mirror the house’s massing and increase the density. That lot is quite a bit larger than the surrounding properties. We were trying to create something that would improve the existing building.”

A new entry courtyard accessed from the alley would provide access to the new building and formalize a back porch setting for the house. Ten tenant parking spaces are shown with a few more indicated for use by shops along Bardstown Road, also along the alley. A new sidewalk lined with trees would run between the alley and parking and the house along a side yard. The new apartment units, two per floor, would range from 850 to 950 square feet, with a larger penthouse above.

“One of the things we’re trying to do is provide pedestrian access to the area along the alley,” Passafiume said. “Murray is pretty tight and dense, but the alley has frontally—it’s a unique site.” Significant in this proposal is that the building owner plans to occupy a new penthouse unit atop the new structure.

“One of the family members wants to live there and take the penthouse,” Tasman said, hinting at some of the design features that could come into play. “We’re talking about a live green roof. A lot of green features will be built into it. It can’t just be a vanilla box.”

“When I do a project I don’t cut corners,” Tasman added. “It blends in with historical or urban elements. It’s high quality.” That doesn’t necessarily mean the building will take on a traditional look. “You’re not going to rebuild a 100-year-old Victorian house,” he said. “Our ultimate goal is to blend in the two.”

Tasman said once he meets with neighbors, he’ll contract with architects to come up with a design based on their input. The massing might look similar to these diagrams, but a refined design will take a much different shape. “We’re looking for positive feedback,” Tasman said of the July 21 neighborhood meeting. “We want to hear the neighborhood’s responses.”

“All I ask is for people to come with open minds and ideas,” Tasman added. “We really want to make a positive impact on the neighborhood so that his great grandkids would be proud to own it or live there.” In Louisville, alleyways have long been a tool for increasing density without overwhelming a neighborhood with development. Carriage houses or granny flats are common in the Highlands and throughout the urban neighborhoods of Louisville.

“I really believe that this alleyway is like a sort of street,” Tasman said. “In bigger cities, you’d see buildings and even commercial off alleys.”

Because of 2019 Murray Avenue’s particular site at the intersection of two alleys behind Bardstown Road, it lends itself to a denser type of development than you would expect farther into the neighborhood. And Tasman says owners plan to use finishes consistent with a building facing a main street.

“We’re going from a multi-family to a more dense multi-family,” Tasman said. “It’s still not going to be as dense as a lot of comparable in the neighborhood.” According to an analysis by architects, a number of multi-family properties in the vicinity already fall under the R7 zoning classification, as indicated by the diagram above.

“To try to build long-term value, it has to fit in,” Tasman added. “If they try to put a square peg in a round hole it’s not going to fit and they’re going to hurt themselves in the long run.”