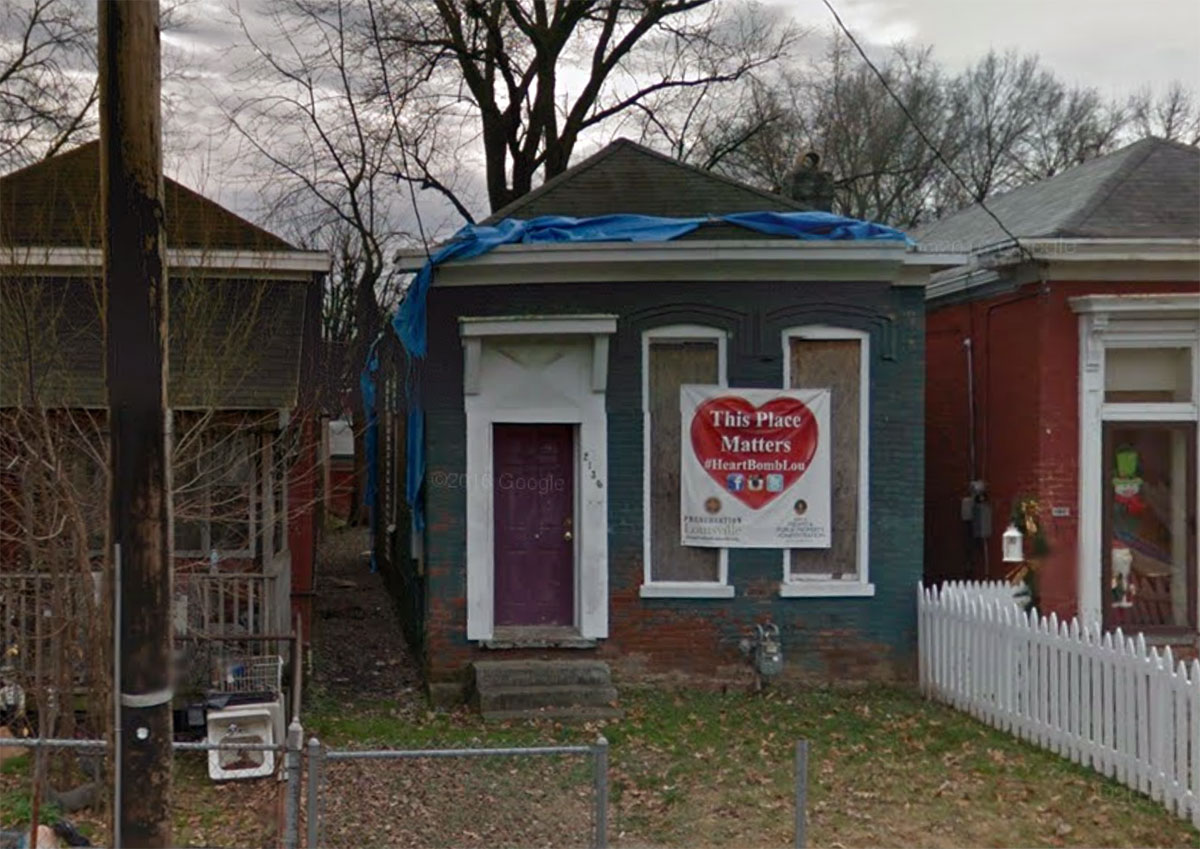 While going through a batch of proposed demolitions recently, I had to give one house a second look. Hadn’t I seen that one before? The house is a small brick shotgun at 2136 Lytle Street in Portland.

And it turns out I had seen it over a year before when Marianne Zickuhr, the former executive director at Preservation Louisville hosted a “heart bombing” campaign (don’t worry, no explosives here). According to Design*Sponge, the concept emerged out of Buffalo, New York, several years ago:

“[A]n energetic group of forward-thinking preservationists decided to…send Valentines to some of the city’s most endangered buildings in desperate need of love. The idea is called “heart bombing,” and it’s awesome.

An appropriation of the street-art term “bombing,” this version is the brainchild of Jason Wilson and Bernice Radle, two of the founding members of Buffalo’s Young Preservationists. Conceptually, the idea is quite simple: Choose a number of endangered buildings from the city’s demolition list and cover them, sometimes rather haphazardly, with an explosion of paper hearts and love letters.

During Valentine’s Day 2015, this little abandoned house on Lytle Street began feeling the love. Later that year in June, the nonprofit wrote on its Facebook wall: “Preservation Louisville’s first SOS [Save Our Shotguns] shotgun house is under contract and being prepped for rehab!” There’s a certain sense of relief hearing news like that.

A brief note on Lytle Street: the prominent Portland thoroughfare was named for the Lytle family, of which, according to the Portland Museum, “General William Lytle founded the Town of Portland in 1811.” The original settlement is long gone, sitting along the river near the foot of present day 34th street. Due to flood damage in 1937 and 1945, the area was largely leveled during construction of a levee system. But Lytle’s name lives on in the neighborhood street lined with shotgun houses.

But over a year later, 2136 Lytle Street had an Intent to Demolish sign posted, which left me scratching my head. What went wrong with restoration efforts?

It turns out that time required to get through red tape and the elements both played a role. A partial wall collapse eventually broke off the partnership by overwhelming the scale of the project for Preservation Louisville. But as we’ll see, there’s still some hope yet for 2136 Lytle Street.

“We were asked to do mitigation to counter historic fabric lost in the California neighborhood,” Jeana Dunlap, Director at Metro Louisville’s Vacant & Public Property Administration, told Broken Sidewalk. “Whenever we do a mitigation, the SHPO [State Historic Preservation Officer] reviews some of our demolition candidates when they’re related to historic Section 106 requirements.”

Six houses, including 2136 Lytle, were included in a Request for Proposals (RFP) for reuse seeking interest from private entities to bid on properties starting at $2,500. This led to interest from Preservation Louisville.

“We don’t get access to a lot of brick shotguns,” Dunlap said. “Those are the ones I really like to focus on because they’re a lot more salvageable—they’re more than a wooden house on a dirt foundation. We save as many as possible, but we need partners to do it.”

A partnership between the nonprofit Preservation Louisville, a for-profit entity comprised of PL board members called Shotgun Partners, and Metro Louisville formed to redevelop the shotgun house.

“We have a Landbank pricing policy,” Dunlap said. “If you embark on a Metro-sponsored activity, you get the property for a dollar.” So Preservation Louisville would have received the house for one dollar under the agreement that it contributed $30,000 to its renovation. “Shotgun Partners had a sizeable chunk, too,” Dunlap said.

“We made a commitment to the nonprofit with the expectation they would work with the for-profit,” Dunlap said. “The for-profit was to take title, and the nonprofit partner was to partially fund the renovation.” She noted that Shotgun Partners, headed by Kimberly Stephenson of Marian Development, “was going to do the vast majority of the construction work and oversight and manage the property once it was renovated.”

The Lytle Street shotgun represented Preservation Louisville’s most ambitious Save Our Shotguns project. Stephenson said previous Save Our Shotgun efforts had been partnerships with other groups like New Directions to renovate owner-occupied houses.

“The intent was to do restoration to allow the owner to stay in place,” she said. “This would have been the first property where Preservation Louisville would have owned and renovated the home. We were for sure looking for it to be utilized as an example of NPS / SHPO exemplary restoration efforts.”

“It looks like the total project cost was estimated $107,890,” Stephenson said. That number included both hard and soft costs, such as engineering and environmental costs, insurance, construction loan origination fees, and developers’ fees that were to be donated back into the project. The total renovation cost was around $80,000, she said. “None of those funds had been actually raised,” she added.

“Several individuals including ourselves were donating our time and work to the project,” Stephenson said. “Lots of folks did lots of work on that house. No one was making any money off that property.”

Stephenson said the group hadn’t figured out how to use the house once the renovation was complete. “We hadn’t even really gotten that far,” she said. “Perhaps sell it at an affordable rate to someone who lived in the neighborhood.” Dunlap recalled discussions of using the house as a rental property as well.

But along the way, the project hit some red tape.

“We never had a definitive timeline, but my expectation was that it would happen soon,” Dunlap recalled. “We never set a date or a deadline, we just began putting together the partnership.”

Zickuhr left the top post at Preservation Louisville late last year and no interim director has been put in place, taking some focus off of the shotgun house project. Dunlap recalled Zickuhr’s enthusiasm for the house and noted that the heart bombing campaign put it on their radar in the first place. Zickuhr did not return a call for comment.

As time dragged on, the shotgun house began to deteriorate further, and this past June, part of a side wall collapsed.

“This is one of those properties that I think at one time had one or two side entrances,” Dunlap said. “Over the years when they filled up those entrances they didn’t do such a good job. It was a pretty large chunk of wall section that fell out and was no longer there.” A photograph of the house before the collapse shows two doors, or perhaps a door and a window, boarded up and covered with siding at the collapse site.

“We had to go in and put some reinforcements in,” Dunlap said. “They were able to shore up the remaining portions of the wall and seal it up so people couldn’t just walk in and out of it.” That stabilization took the weight of the roof off the now fragile brick wall and a new stud wall sealed up the opening.

“We have building inspectors look at all the properties under our control,” Dunlap said. “To no surprise he thought this building was too far gone. I do know that when it comes to historic preservation, people can do some amazing things if they have the resources to do it.”

“We let Shotgun Partners know to see if they were still interested,” Dunlap said. “They were no longer interested after visiting the site.”

“Several people looked at it,” Stephenson said. “Our construction division and the president of Marian walked through the property. They felt the damage was too severe and it would make restoration cost prohibitive. Preservation Louisville is a very small organization.”

In the end, Stephenson said the collapse simply made the project too big of an undertaking. “It was seen that if we did it in its current state of disrepair we’d end up losing money,” Stephenson said.

“It’s in a perilous state,” Dunlap cautioned. “The longer it sits the weaker it gets.”

By mid-July, an Intent to Demolish notice was sent out for the house by Metro Louisville. According to the request, the city can issue a wrecking permit any time on or after August 11. But come next Thursday, bulldozers won’t be waiting on site.

For now, Dunlap said the city would hold off on demolishing the house while discussions over its future are ongoing. “We chose not to do asbestos [abatement yet] because it’s fairly invasive,” Dunlap said. She noted that it can take some time to award all the contracts involved with a demolition.

“We are talking to the VAPStat team about purchasing that house,” Stephanie Kertis, Managing Director at the Portland Investment Initiative (PII), told Broken Sidewalk. “Their asking price is $2,500, which is pretty standard for these houses that are slated for demolition. It’s right in the scope of the other nine houses we’ve done in the neighborhood.”

Kertis said the wall collapse wouldn’t stop them from taking on the project. “I and my construction team walk through houses all the time,” she said. “That sort of thing is scary to a lot of folks but it’s something we see all the time and it’s not a deterrent.”

Still, any proposal could take up to a month or more to move forward. “Gill would submit [an offer] and then we would review and make a recommendation to the Landbank Authority which meets once a month,” Dunlap said. “If we’re really on top of our game we can have everything in place so it can close shortly thereafter.”

But Holland and his team have been through the process before. “Our house at 1837 Bank is another we purchased from the Landbank Authority,” Kertis said. “I remember it taking it quite some time.”

“My primary goal is not to demolish historic properties,” Dunlap said. “There’s enough blight in this community that really does need to be cleared, the last thing I want to do is spend precious resources demolishing something historic.”

“We are leaving room for someone to take over this property who has the resources to do it justice,” Dunlap said. “In the event that doesn’t happen we plan to move forward with demolition.”