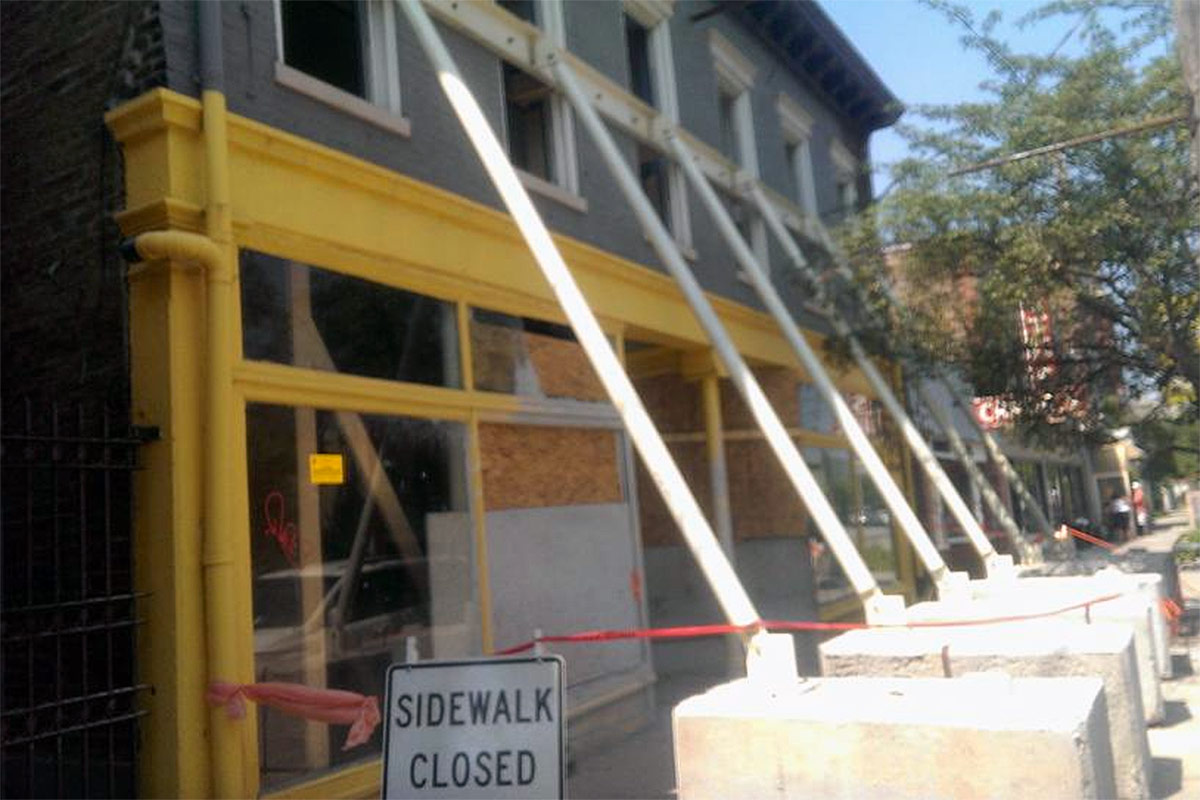 The rumors on this one have been swirling for about a month now, and we’ve received plenty of tips. Head over to East Market Street, and you’ll see what’s become somewhat of a common occurrence around Louisville in recent years: bracing propping up a historic building facade. Whiskey Row‘s got ’em, the old Fort Nelson Building had ’em, and now a two-story structure at 632 East Market Street in Nulu is sporting a set.

“We were trying to do some renovations, and while we were working the east wall started to move,” building owner Chad Givens told Broken Sidewalk in a phone call today. He met with the city and their engineers to come up with a plan forward. “Everyone decided the wall needed to come down.”

The problem likely arose when the first floor joists in the structure were removed, eliminating one level of bracing against a shifting wall. The interior, as seen in April, was a deep pit, exposing the structure’s stone foundation, brick walls, and generally the guts of the building.

With the new bracing supporting the delicate masonry facade, Givens has begun taking down the brick, beginning at the top of the second floor. An elaborate system of scaffolding is keeping the building standing. In the meantime, use caution when walking along the sidewalk.

“We’re going to take down the wall, and put up a new wall,” Givens said. “We’re using the old brick as much as we can.”

He said the new wall will be clad with the brick crews are taking down, so the 19th century structure retains its original materials and look, although several windows on the side of the structure will be removed as part of the new wall. The front facade is not expected to change.

Givens has no tenants lined up for the structure, and had previously posted a for lease sign in the building window. “We have no plans yet, he said. “We’re just trying to get it fixed up to lease. New electric, new plumbing. That’s still the plan.”

The structure previously held the catering operation for the Bristol Bar & Grille but had been vacant for some time. An August 2015 report from Insider Louisville notes that Givens and his business partner Robert Gauthier purchased the 8,100-square-foot building from PBI Bank for $500,000.