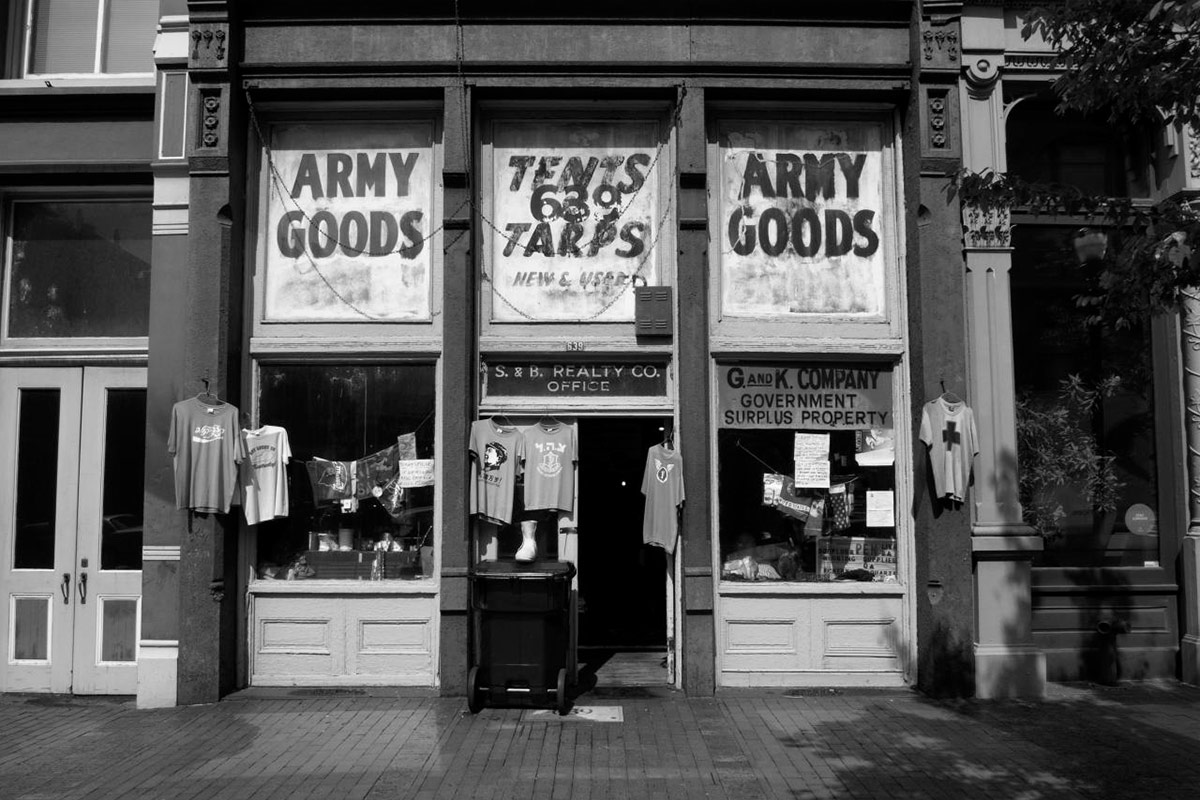 We knew it was only a matter of time. When Julian Goldberg, the proprietor of G&K Shoe Company, passed away last July, the future of his distinctive cast-iron building on West Main Street housing his long-time business remained uncertain.

The Downtown structure’s inheritors, the estate of Julian Goldberg, have now listed the building for sale with Commercial Kentucky with no asking price.

The structure covers 10,260 square feet on three floors, according to the listing. Like other buildings in the area, the structure features an additional street-facing level on Washington Street as the city’s topography drops off toward the Ohio River.

“The building was home to G&K Surplus for 78 years,” the listing by broker Sam English reads. “Essentially in original condition. This is an opportunity to create something new on vibrant Main Street.”

What’s most fascinating about this structure is that it’s a sort of time capsule on West Main Street. The building was built—or rebuilt rather—in 1892 after a devastating fire wrecked the street between Fifth and Seventh streets.

The structure that preceded the 1892 building was a four-story stone-clad building standing 54 feet tall. The three-story structure that was rebuilt with cast iron stands 46 feet tall. An atlas from 1905 shows the structure was operating as a wholesale grocery company. That means today’s 639 West Main is 124 years old.

The infamous fire of December 8–9, 1891 began in the Boone Paper Company building, proving to be one of the deadliest in Louisville’s history. The fire broke out early in the morning, and several people sleeping in the structures were able to escape. A falling wall killed four firefighters from the No. 1 Hook & Ladder Company. Four buildings were burned in the inferno.

With the Boone Paper fire still smoldering, another building exploded a block east around 8:00 that day. The gas explosion ignited the F.A. Menne & Company’s “wholesale candy and fancy grocery house” in the 500 block. Some 40 girls were at work wrapping candies when the fire broke out, and eight were burned alive.

“But once before has Louisville been stricken with such a disaster as that which befell the city yesterday,” the Courier-Journal wrote the following day, comparing the fire to the Great Tornado of 1889.

The site became a solemn spectacle for the city. “The wrecked buildings were the interesting centers, and at times the crowd became so dense that the police found it necessary to enforce the move-on law,” a December 14, 1891, Courier-Journal report noted. Still, the crowd was silent. “The shattered walls were a forcible reminder of the sad fates of the twelve victims, and everybody talked in suppressed tones.”

Following the 1891 fire, Louisville Fire Chief Hughes, himself injured in the fire, lamented to the Courier-Journal about poor construction of the “skyscraping” buildings along West Main Street that made fighting fires dangerous.

“If all buildings were properly constructed and properly equipped, and were not over five stories high, we would have less destructive fires,” Hughes said. “The construction of many of the biggest buildings in the city is faulty,” he continued. “Take the stores along Main street…The walls are defective in many of the buildings. Think of only thirteen-inch walls! No wall should be erected less than eighteen inches.”

But for most of the 20th century, 639 West Main sat in a state of limbo, untouched by renovations and used mostly as storage for the retail shop below. This certainly makes it unique among the buildings lining the street, and could offer inspiration for the buildings future uses. What would you like to see the building converted into?

A block to the west, the cast-iron and stone Alexander building at Eighth and Main streets was also recently listed for sale by the city, so another chapter will soon be written along one of Louisville’s most storied streets.