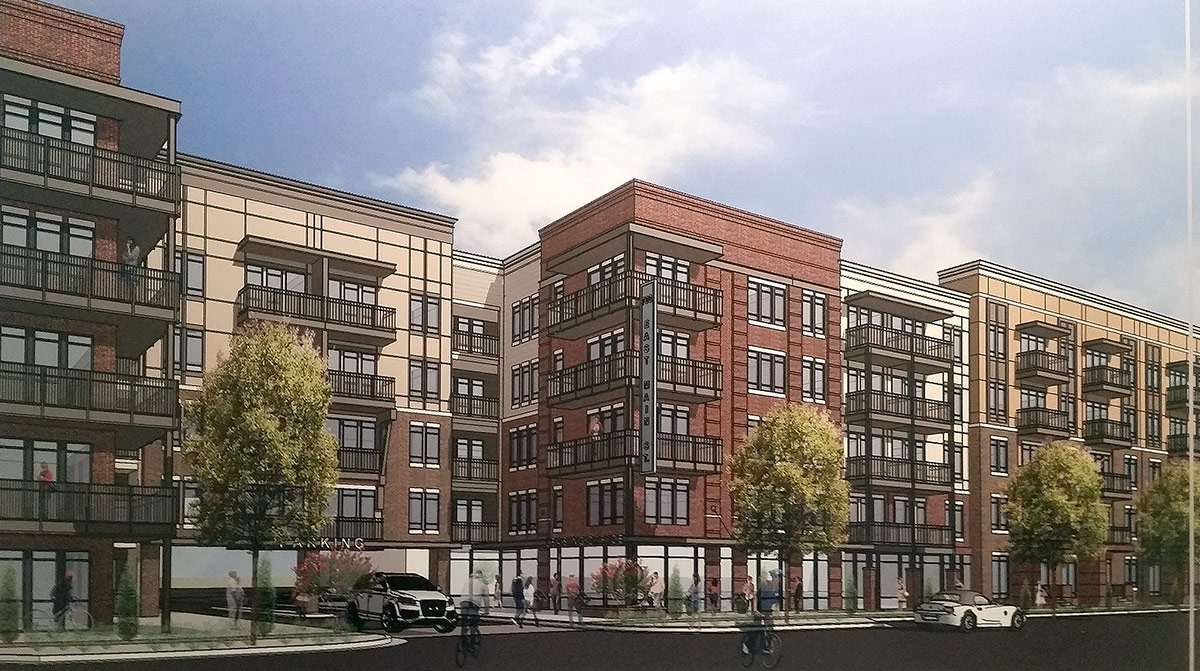 This past April, Broken Sidewalk broke the news that the much-watched Service Tanks Property at 700 East Main Street had been placed under contract. Now Jacob Ryan at WFPL brings the first news of what’s slated to that 2.72-acre site.

Georgia-based Flournoy Companies held a neighborhood meeting Tuesday night at The Green Building, where a couple teaser renderings and a site plan were unveiled, and Ryan reported today on the company’s early development plans. Flournoy vice presidents Blake Breimann and Ryan Foster were on hand at the event.

Calls to Flournoy today were not returned by press time.

The project design and program

Plans include 272 units of residential apartments in a five-story building and a five-story, 430-space parking garage. What wasn’t proposed is just as revealing: no retail is planned at the site, and developers plan to clear the entire site north of Billy Goat Strut alley, which includes a three-story, historic corner commercial building.

Apartments, ranging from studios to two-bedroom units, will top out at around $2,200 a month, according to Ryan’s report. The project site plan also notes that 7,000 square of amenity space is planned including a fitness center, clubroom, and tenant swimming pool.

Developers estimated the project could be complete in about 2 years, Ryan noted.

The site plan shows the building wrapping a large parking garage on roughly the eastern half of the site. On the western half, a square doughnut forms a courtyard with a tenant swimming pool. The site plan arrangement is in line with nearby developments by Columbus, Ohio developer Edwards Companies in the Original Highlands and Phoenix Hill.

According to a rendering presented at The Green Building, the apartment building appears to be clad in several colors of brick, either rising to the structure’s full five-story height at corners or the first three stories elsewhere with what look like fiber cement panels covering the upper two floors. A subtle, almost flat, cornice line is shown at the top of the structure.

Ample use of balconies is also shown, a welcome sign on any new residential project, creating dynamic patterns on upper floors. A leasing gallery is shown next to the entrance to the parking garage. The general form along Main Street is a protruding and withdrawing mass that creates small landscaped areas along the street.

The Service Tanks site runs along East Main Street from Shelby Street to Clay Street, wrapping around the side streets at least until Billy Goat Strut alley, and along Clay another 100 feet. Overall, the site covers 1,050 linear feet of street frontage, about the size of two Louisville blocks.

To go without retail frontage on such a large extent of frontage, especially along Main Street, would certainly hinder the pedestrian vitality growing along Nulu’s East Market Street main drag. Nulu can’t thrive as a few blocks of retail located along one linear street. By not pulling retail along side streets to Main, the 700 East Main project serves to disconnect the area with momentum taking shape in Butchertown.

That’s a concern shared by many in the neighborhood. But according to Gill Holland, Flournoy Companies has been willing to listen to neighborhood concerns. Holland briefly attended last night’s meeting and met with developers six weeks ago at another neighborhood meeting.

“My main concern is making sure there’s some street level presence—retail—so it’s not an entire block of just apartments,” Holland told Broken Sidewalk. “They seemed very receptive to that. They’ve been very good about reaching out to the neighborhood.”

Adding retail wouldn’t only help the Nulu and Butchertown neighborhoods, it could also help developers make it through the public review process more easily.

The 700 East Main site falls under the newly created Nulu Review Overlay District (NROD). Formed in 2015, the overlay’s first big test was approving the Rabbit Hole Distillery a block south, but Flournoy’s project will be next up to move through the committee.

Let’s look at a couple NROD guidelines the committee use to evaluate the 700 East Main proposal.

“Buildings should be ‘pedestrian-friendly.’,” the guidelines state. “Design building facade elements that promote a pedestrian-friendly environment including: building to the edge of sidewalk, large storefront window openings at the ground floor, awnings, canopies, lighting, and entrances that face the street… New structures should be located at the front property line.”

The new building does create an urban edge along Main Street, but more along the lines of the AMP Apartments on Frankfort Avenue by Indianapolis-based Milhaus development, which set the building back slightly behind grass and offered no retail. Flournoy wrote on its site plan that the building featured “stoop” units, but such ground level apartments along major arterials in Louisville like Main typically lend an alienating feel to a project.

Besides creating a lively street level, the committee will weigh how the project treats historic preservation. There are two remaining structures on the 700 East Main site that are historic. The vast majority of the land is covered by empty lots or a signature blue metal warehouse structure. (Plenty of other buildings once lined the area before that warehouse.)

Additionally, the site sits directly across the street from the Butchertown Landmarks Preservation District and within the Phoenix Hill National Register Historic District. According to the Kentucky Archaeological Survey, a three-story brick corner structure was built between 1875 and 1899 and is listed as historically contributing.

Around the corner on Clay Street south of Billy Goat Strut, a smaller outlying parcel contains a one-story building built first in 1925 and expanded in 1936. Developers plan on keeping the front part of this structure, likely because of the complexities building on its parcel would add to the project. Plans show demolition of the back two-thirds of the structure for four apartments. That third of building up front shows undefined space.

But the corner commercial building at Main and Clay streets right now is slated for demolition.

“Existing structures in the NuLu area are strongly encouraged to be sustainably renovated and reused,” overlay guidelines read. “Given the important role of many existing buildings to the history and streetscape of the area, demolition of any contributing structure will entail stringent review.”

Those guidelines continue: “No application to demolish any Contributing Historical Structure or structure built 65 years ago or longer shall be approved by the Urban Design Administrator,” the guidelines read. They list three conditions that could overrule that decision: “construction of a new structure will have a greater positive impact on the area’s economic vitality and appearance than would preservation of the structure proposed to be demolished,” that “the rehabilitation of the structure or the construction of the new structure would not be possible or economically feasible without the demolition,” or that “the applicant cannot obtain a reasonable economic return from the property or structure unless the Contributing Historical Structure…is demolished.”

Given that the historic corner building occupies a small portion of the site, which is essentially a large blank canvas, it seems unlikely that the latter two situations above would apply. But the more dubious notion that a historic building could be torn down on economic vitality concerns puts all historic structures in Louisville at risk. Given the undulating site plan, it seems like a simple design compromise could easily solve this problem.

A more urban venture for Flournoy

That latter example, built on a largely vacant brownfield site next to Charleston’s iconic cable-stay bridge, even looks a little bit like a lower but larger version of the Louisville proposal.

These projects represent a mix of more urban and more suburban sites, which have allowed the developer to focus on its residential offerings rather than retail that’s desired at Louisville’s urban Nulu site. “That’s where I feel like we can guide them as they’re embarking on a slightly more urban project,” Holland told Broken Sidewalk. “They seem super open—we have had a very good conversation in the past six weeks.”

The 700 East Main Street project is just the latest in a string of high-profile development taking shape or planned in the area.

Directly northwest of the 700 East Main site, Nashville-based Bristol Development Group is building the seven-story Main & Clay Apartments, containing another 270 luxury units, a parking garage, and a modicum of retail on a slightly smaller parcel.

On the southeast corner of the 700 East Main block, Creation Gardens owner Ron Turnier are building an AC Hotel by Marriott, which is moving forward after laying quiet for several months. More on that soon. Creation Gardens had formerly proposed a wholesale grocery store for the site and worked with Service Tanks owners to put together a bold vision for the entire block.

A block south, between Market and Jefferson streets, the Rabbit Hole Distillery is slowly moving along. As we mentioned, that project was the first to go through the NROD process, which slowed everything down slightly as committee members needed to be appointed. The distillery also recently received approval for state tax credits.

Still a ways to go

Tuesday’s meeting at The Green Building was still very preliminary and plans have yet to be submitted to Metro Louisville Planning & Design for review. Any waivers and variances developers seek will also be known then. Once that happens, the project can begin moving through the public review process, which will include among others, the Nulu Review Overlay District, as mentioned above.

Until plans firm up a little more, the project is still uncertain. The site still hasn’t closed, according to Tyler Smith of PRG, who has it listed for $8.9 million. Smith declined to comment on the project or the developer. It’s typical, however, for sites like this to remain under contract until necessary approvals are secured that allow construction to proceed. A developer doesn’t want to be left holding a property without a development to build on it.

Still, despite the couple of issues we highlighted here with retail and preservation, the 700 East Main project looks off to a good start. And it’s heartening to hear developers at Flournoy are actively listening to and working with the neighborhood.

The bones of the project look good and 700 East Main, with some retail and a historic corner anchor, would serve as a great addition to East Main Street, Nulu, and Butchertown. We’ll be excitedly watching to see how this project evolves as it moved along.