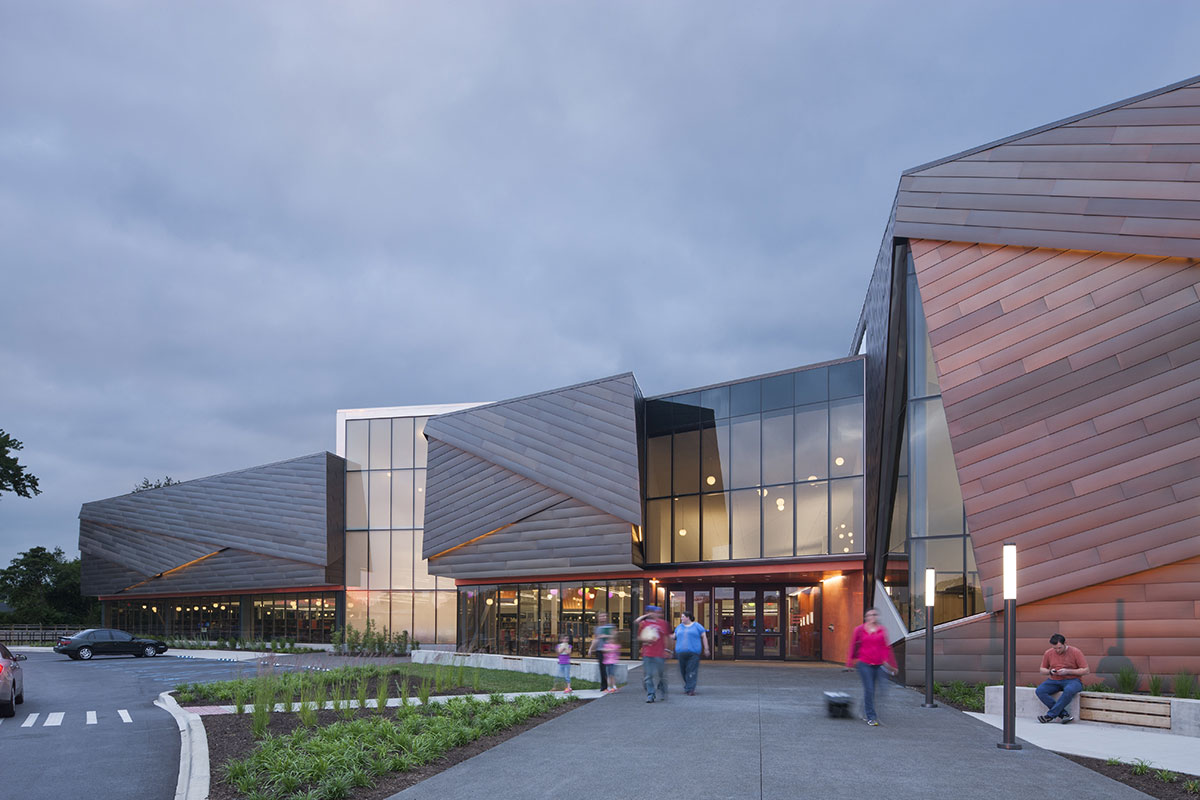 Louisville cleaned up in the 2015 AIA Kentucky Design Excellence Awards, with seven of the eight winning projects announced by the state chapter of the American Institute of Architects located in our region.

Three honor awards and four merit awards were given out to six different firms (Louisville’s De Leon & Primmer and Lexington’s Omni Architects each took home two awards). The jury considered each project’s sustainability, accessibility, harmony within its environment, and how effectively each project tackled the social concerns of the profession, according to Architect magazine. Additionally, judges also used the AIA Communities by Design’s 10 Principles for Livable Communities in choosing the winning projects.

Design matters in Louisville. Take a look at the winning projects below.

Both the client and design team should be commended and celebrated for creating an ambitious project that established a memorable identity for a community library. There is a clear intent in planning and a point of view in the approach to materiality and forms. As a civic building, the west façade presents a strong statement that speaks of its importance to the community.

The glazing of the ground floor facade and the overhanging volumes signal welcome. The solids and voids in massing and the overlapping skins provided visual interest for both the exterior and the interior. More than the exuberance of the forms and materiality, the jury appreciates the attempt to create extension from the inside to the outside. The interior experience is generous, light-filled, with great views of the landscape and sky. The project created a sense of place for reading, sitting and simply being in that connective moment between architecture and landscape.

This project takes sustainability seriously and is not afraid to be didactic. In the best sense, the architecture is loaded with teaching moments without being rhetorical. The design embraces sustainable technologies and wraps it into simply designed and restored historic structures. The skillful integration is further enhanced by a studied and poetic hand at detailing a composition of modern and historic material palettes. The positive result of this strong and sensual approach is a cohesive “green precinct”.

University of Kentucky School of Visual Art and Visual Studies

The strength of this adaptive reuse project of an old tobacco processing facility is design restraint. Simple and straightforward interventions made the most of an already appealing industrial building. The project is admirable for the creation of light-filled gallery/studio spaces and the appropriate choices for material juxtaposition throughout. The South elevation is a particularly adept blend of old and new through the use of grey brick, asymmetrical composition and clean detailing. The level of craft of the intervention respects that of the old, and creates a harmony of the two conditions. This is a great example of how a skillful design hand can extend and amplify the life of a century old building and infuse it with new life and a contemporary character.

As the first public space in Jeffersonville in over a hundred years, this is clearly a project with all eyes on it. Public open space is often one of the key factors that contribute to the quality of life of any municipality. This park delivered a new type of public open space seemingly located within a primarily residential neighborhood. The park managed to create a civic presence by its scale and design for the community while tending to the needs of the individual. The jury appreciates the reference to local culture, materials, history and phenomena while its design is unabashedly modern.

The encircling bike and pedestrian ramp around the central plaza create a layered and alternative experience. At a more intimate scale, the various elements of the park: the light shard, water feature and pavilion hold interest as design objects which activate the park with their sculptural presence.

Simply put, this is a well-executed building with a thoughtfully composed series of volumes. The design encourages interaction between users and appears to foster a sense of community. Common fitness areas are illuminated by an uplifting light quality. Together with the planned density of program, the space feels energized. The jury was particularly taken by the North elevation, a classic disposition for a recreation building that extends its welcome by the large expanse of transparency.

The design of this glass-walled addition is deceptively simple and yet highly refined on several levels. Its scale is in keeping with the neighborhood while its design injects energy by the juxtaposition between the older structure and the new addition. The addition is simple, elegant and cost effective. The constraint of material palette and form lends a confident stillness to the design. The resulting composition is well balanced between old and new. The introduction of the open feeling in the addition is further echoed by the renovation in the existing house, bringing lightness and a sense of airiness to unite the entire project.

The jury is most taken by the interior planning of the residential units and the skillful general re-use of the narrow buildings. The program calls for efficiency and the project delivers comfortable and well-lit communal areas injected with contemporary colors, keeping the facility competitive in the highly competitive residential hall market as part of the recruitment package on all campuses. The project delivered a lot of value and new social typology for the tired dormitory program.

The guest house design is a modern interpretation of a vernacular farmhouse with a reference also to the church on the grounds. The simple forms, appropriate scale, material and color choices for this project create a sympathetic backdrop for the garden. The figure/ground of built/planted/open areas are skillfully composed and show deference to the original church, on which ground the guest house is deftly fitted in its “green” periphery. Materials in the garden and materials of the guest house anticipate each other and the result is that of harmony and contrast. The large overhang of the gabled roof creates a welcoming terrace, while the clever design of the aperture in the overhang brings in light and offers views out to the gardens. This is a good example of a contextual project that packs richness of design in a simple program.