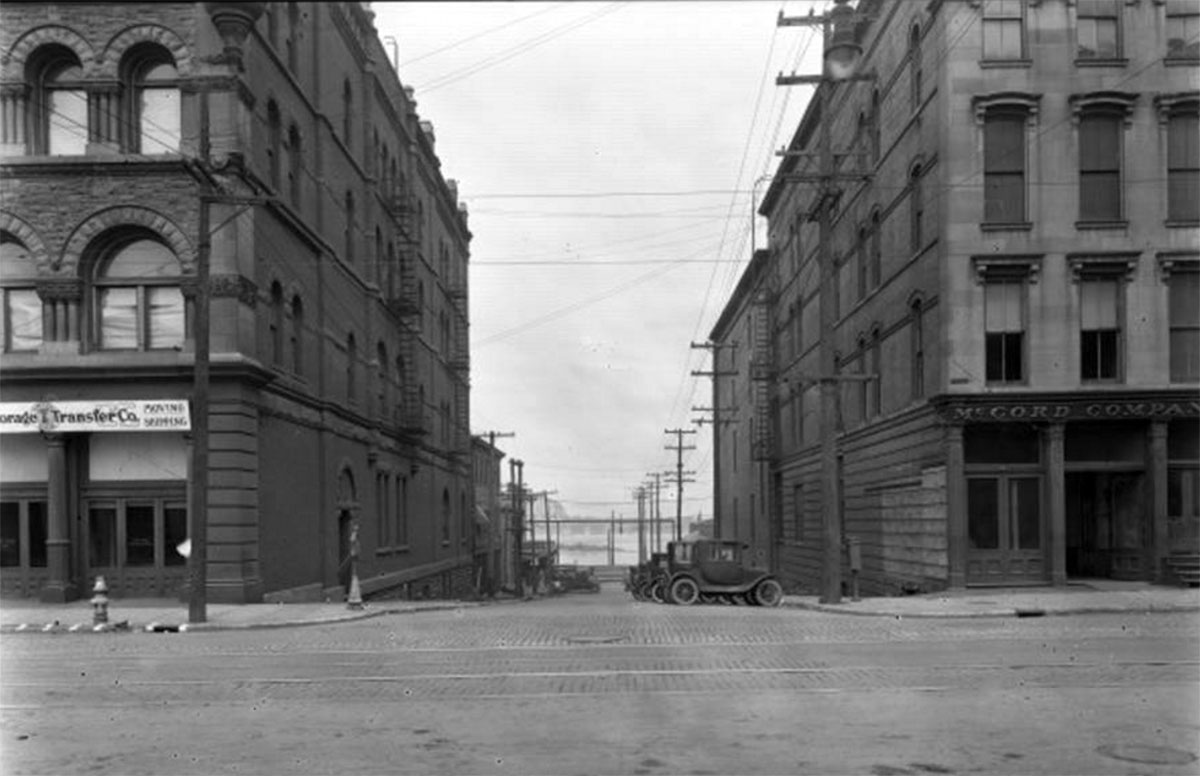 We recently wrote that the Alexander Building on the corner of Eighth Street and West Main Street in Downtown Louisville was listed for sale by Metro Louisville. We asked for some ideas on what you’d like to see go in, and we got some great feedback. We’ve compiled some of the top ideas into a poll so get a more accurate tally of your opinions. Take a look and vote below.

We also heard from several tipsters about the history of the building, including one who shared this view of the structure in 1890 following the Great Tornado that wrecked a good portion of the city on March 27 of that year.

Needless to say, the structure was rebuilt exactly how it appeared before the tornado, with three stories of limestone facade over a cast-iron ground floor.

Half a block west, the two-story building today housing the Sons of the American Revolution wasn’t so lucky. When the tornado sheared off its top two floors, the structure was capped at its modern diminutive scale. You can see more photos of the devastation on the tornado monument at the northwest corner of Eighth and Main.

There are three historic hotel sites—Eighth & Main, Ninth & Main, and Seventh & Market—that share the same names over the years, perhaps suggesting the dynamic nature of the 19th century hotel business, but also complicating tracking down history.

An advertisement from early 1867 lists the hotel as the St. George Lodging House, “a new house with nicely furnished rooms” costing only $1 a day.

Five years later, another ad labeled the venue as Alexander’s Hotel, catering to business in the city’s wholesale district. “Furnished and fitted new throughout in the best of style,” according to the February 24, 1872 advertisement. Then, a room cost $2 a night.

That 1872 ad said the property at Eighth and Main was previously known as the Alexander House and then, briefly, the National Hotel (itself with various locations over time).

In February 22, 1996, a report in the Courier-Journal noting a new piece of public art (more on that below) said today’s Alexander Building was built in 1857 as the Phoenix Hotel and later renamed the Alexander.

But advertisements from 1868 show that Phoenix Hotel stood at the northwest corner of Main Street and Ninth Street, a block west. By 1882, another ad shows that the Main & Ninth venue had changed its name to the Planters’ Hotel.

Then, a February 18, 1903, report in the Courier-Journal notes that the Phoenix Hotel, formerly the Alexander Hotel, (this time at Seventh & Market) was being dismantled to make way for a clothing factory. The report noted that the hotel had operated for some 30 years, but did not offer locations.

The earliest reference we could find to the Seventh & Main location was from 1868 when the site was advertised as the Alexander House.

Sanborn insurance maps from 1892 and 1905 shows that the structure at Eighth and Main was in use as an industrial building, noting the corner as a wholesale liquor company.

Back to that public art. In 1980, a group including Dennis Clare, Ted Strange, Creighton Mershon, Alex Talbott, and Glenn Schilling purchased the Alexander Building, using it as various office uses including space for Metro Louisville’s real estate division. According to the 1996 C-J report mentioned above, the group commissioned a grand, eight-foot-tall sculpture by Berea artist Kenneth Gastineau called Phoenix Rising.

Gastineau’s sculpture depicted the “mythical phoenix taking flight” to honor the original hotel, the C-J reported. We reached out to Gastineau via email requesting additional information on the sculpture but haven’t heard back. Anyone remember exactly what it looked like?

Whether or not the Alexander Building at Eighth and Main ever housed the Phoenix Hotel remains uncertain, but it does stand as an important piece of Louisville’s history during the steamboat era and beyond.

Know more about the building? Please share in the comments below.

And now, vote for what you’d like to see fill the Alexander Building once it’s sold. You can choose more than one option from the list above.

And remember, bids on the building are due no later than February 29.

[Top image of the Alexander Building in 1925 courtesy the UL Photo Archives – Reference.]